Thank you to Megatech Projects Ltd 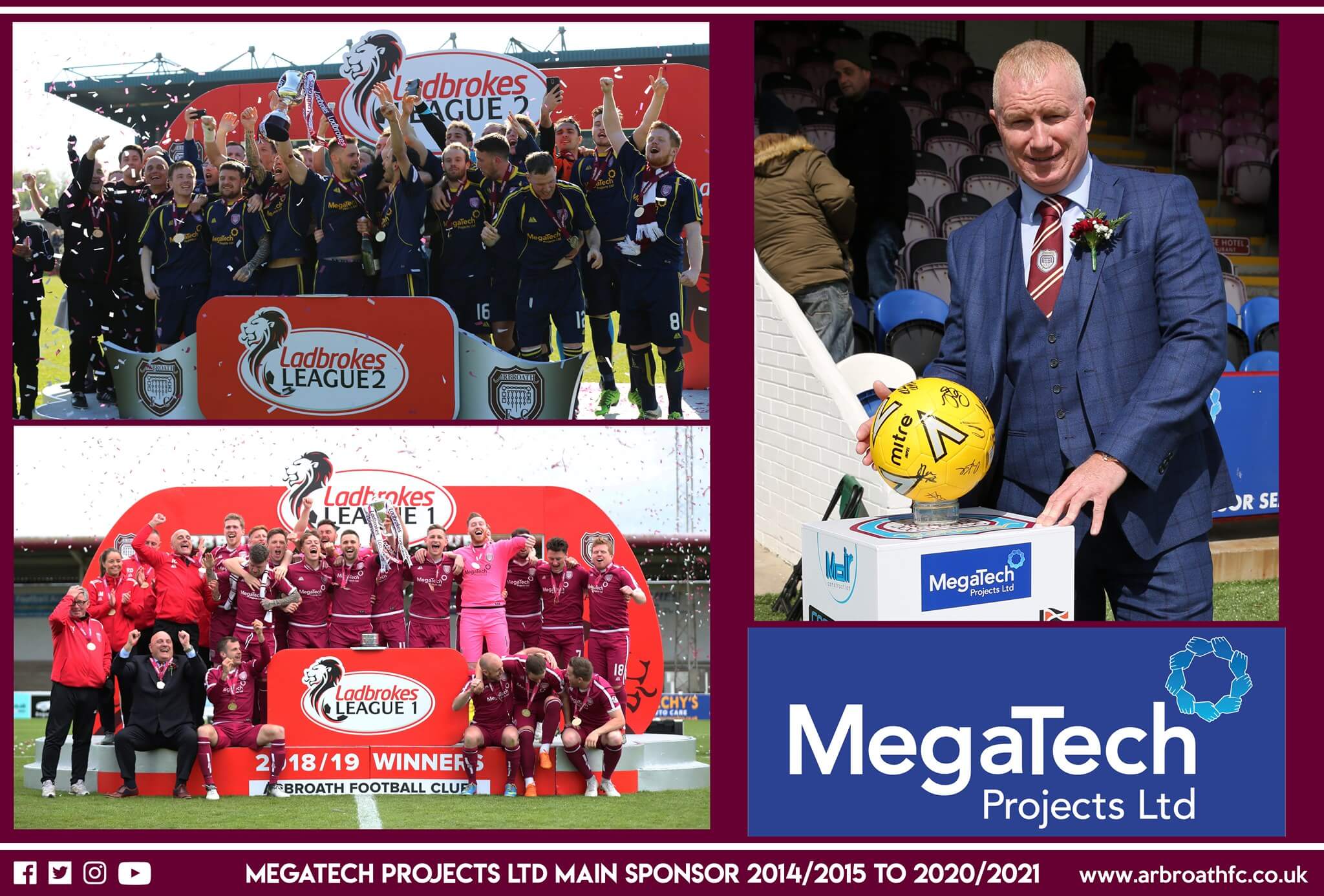 Thank you to Megatech Projects Ltd
Arbroath FC would like to thank main sponsor Megatech Projects Ltd and Megatech Projects Ltd Managing Director and former Lichtie George Rowe for his continued support of Arbroath FC.
The 2019/2020 season was the 6th season that Megatech Projects Ltd have been the main sponsor of Arbroath FC, with George showing his support for the Lichties back in 2014/2015 season becoming our main sponsor before last summer when he kindly extended his current 5 year sponsorship for a further two years to the end of the 2020/2021 season.
It has been a fantastic journey together with now two championships lifted and a fantastic debut season in the Championship all with Megatech Projects Ltd proudly on our strips.
The relationship between Megatech Projects Ltd and George Rowe goes back many, many years.
George Rowe joined the club at the start of 2000 and was part of a formidable defence alongside Jim Thomson as Arbroath were promoted to the first division coming runners up behind Partick Thistle.
In his second season at Gayfield George led Arbroath into the First Division in an incredible season where Arbroath finished in 7th place above St Mirren, Falkirk and Raith Rovers.
Not only that, but Dick Campbell also signed George when he was in charge of Partick Thistle and George has known Arbroath Chairman Mike Caird for over 20 years.
In fact when the news of the football season was halted in March, Mike received a phone call from George that day asking if there was anything he could do for the club – a true reflection of George’s personality.
George has also shown his generosity by sponsoring local youth side Arbroath Harp Youth Football Club and came forward to help Mental Health Charity Back Onside
Arbroath Chairman Mike Caird added;
“I have known George and his father Jim Rowe for many years and not only are they good friends but with George’s company, Megatech Projects Ltd and their backing for 6 seasons, going on 7 they have been able to give us a platform to support our Manager Dick Campbell and the team he has put together.
Not only was George a classy and determined defender at Gayfield and as Club Captain he helped us finish 7th in the old First Division. This season, with his company’s name on our shirts we have secured 5th place in the Championship.
It seems fitting that there are so many parallels between the two sides. Both battled all the odds and showed the same grit and determination and this is a journey we have shared together.”
We hope to welcome George and Jim back to Gayfield soon to show our appreciation again, but in the mean time we would like to once again thank Megatech Projects Ltd and George Rowe for their continued support.
C’mon the Lichties