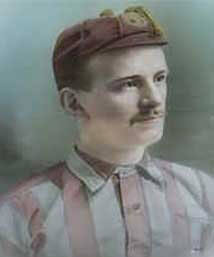 As a youth ‘Ned’ played for a junior side St. Helena in Arbroath at outside right. Recruited by Arbroath he played as a keeper for about two seasons in the reserve side reaching the semi-final of the Forfarshire Second Eleven Cup. James Milne retired from first team football in February 1886 and Doig played his first official game for the Maroons on 6th February when 19years 3 months old. Just over a year later he was selected for Scotland versus Ireland at Glasgow, Scotland winning 4 – 1. A further international appearance, again against Ireland on 9th March 1889 resulted in a 7 – 0 victory. ‘Ned’ Doig thus became the only player to gain International recognition whilst with the club. He also took part in at least 9 representative games for Forfarshire including Forfarshire v All-Scotland which was won by 3 –1.

Doig played in at least 128 games for Arbroath, winning the Forfarshire cups in 1888 and 1889 and the District Charity Cup in 1889. Some notable club games include a 20 – win over Orion of Aberdeen in the Scottish Cup, a 4 –2 win over Our Boys (Dundee) to celebrate Queen Victorias’ Jubilee in which “handsome silver medals were awarded to the winners. In 1887 – 88 Arbroath reached the Scottish cup 6th round before being knocked out by Abercorn. The following season in a fifth round home game, the club with only 10 players for a large part of the game were unfortunate not to beat Renton, the semi-finalists, the final score being 3 – 3. The replay at Renton was lost by 4 –0.

In November 1889 Doig was lured south to play for Blackburn Rovers in the English League. However, he had a disagreement with the club after one game and returned home after one game. As he had taken part in a professional game Doig was no longer selected to play for Arbroath.

Sunderland A.F.C were elected to the Football league in 1890. Losing their first two games Doig was recruited to replace their amateur goalkeeper. Unfortunately his first game was marred by the fact that the Football League deemed him ineligible as he had not been registered with the club for 7 days and Sunderland became the first club to be fined and have points deducted for this offence. Sunderland, with Doig as an ever present in goal, in their second league season won the title in 1892 and also in 1893. By this time they were titled “The Team Of All The Talents”. Further championships were won in 1895 and 1902.

The Scottish F.A. refused to recognise professionalism and Anglo-Scots until 1896 when Doig was again picked the represent Scotland v England, Scotland winning 2 – 1. Three more caps, all against England were gained in 1899, 1902 and 1903. The 1902 game, the first Ibrox disaster was replayed but Doig was injured and unable to play.

Doig completed 14 years service with Sunderland, at that time a record. He played in 417 League games missing only 13, some of which were due to international duties; 35 F. A. cup games and a further 216 representative and friendly games.

Liverpool F.C. were relegated to the English Second Division in 1904. Doig was signed for a fee of £150, and on his first game became the oldest player to make a debut for the club. Liverpool promptly won the Second Division Championship in his first season, Doig being an ever present conceding only 25 goals in 34 games. The following season 1905 –06 Doig lost his place to Sam Hardy, a future England international after only 8 games when he was said to be suffering from rheumatism and he only played 9 more First Division games in the next 2 seasons. Released by Liverpool in the summer of 1908, his last game on 11.04.1908 at the age of 41 years, 165 days is still a record for the club. Although his first team appearances totalled 53, 135 club games were played in his 4 years service.

Two further seasons followed, playing for St Helens Recreationals in the Lancashire League clocking up a further 85 games, before finally retiring in the summer of 1910.

In a career spanning 25 seasons ‘Ned’ Doig played in at least 1055 game of football.