We are a proud small community Football Club with our past cemented in the football history books forever. Yet we are always looking forward and to the future.

As a club we are very fortunate to have support not only on the terraces week after week but also individuals and companies who are known throughout the world.

With this vision, we proudly launched the “Arbroath Football Club Ambassadors” in the 2017/2018 season.

These Ambassadors support the Football Club and Board in several ways.

Not only will do grow at home in Scotland but we journey across the world both in social and commercial avenues.

We were delighted to announce our two very first Arbroath Football Club Ambassadors.

Appointing club ambassadors is viewed as a key part of mapping the club’s future – using the appointed Arbroath FC Club Ambassadors standing and reputation in the local, national and international areas to engage and help the Club and community.

Ambassadors get involved in a variety of ways, representing the Club at various events, taking part in fundraising events, supporting our campaigns or even something simple like tweeting a message for us, or providing a quote of support and a photo for us to use.

Arbroath Football Club is proud to have fans from far and wide, and we are excited to announce the appointment of more club ambassadors very soon. 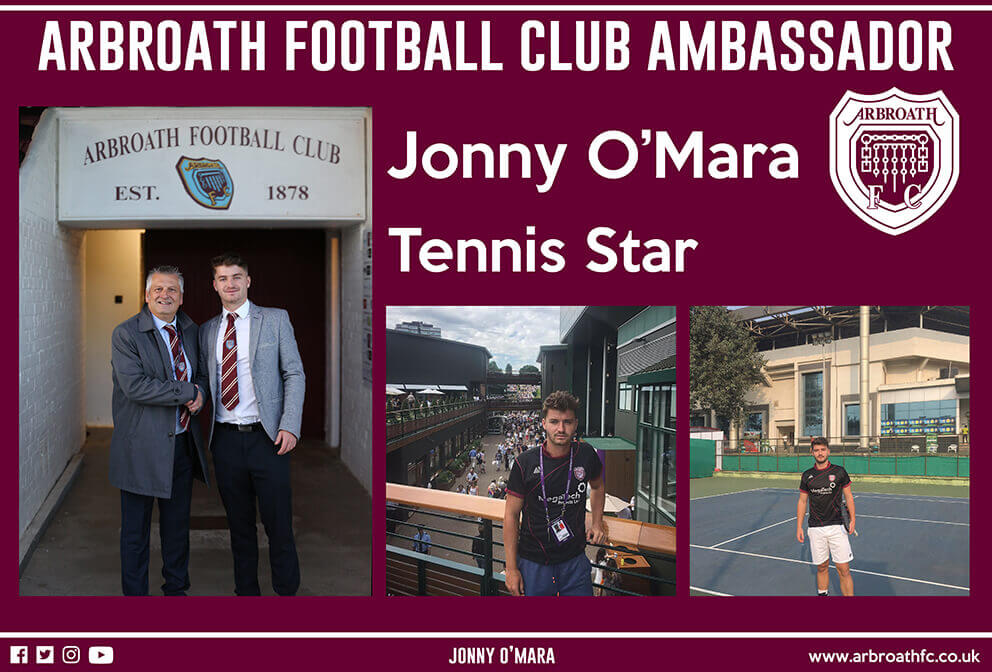 Jonny was part of the GB University Team who beat the 5-time Champions, USA, in the final for the very first time.

In June 2018, along with partner Luke Bambridge, he claimed his maiden ATP Tour title in the men’s doubles final at the Valley International in Eastbourne before winning the Stockholm Open in October 2018.

In 2019 Jonny and Luke made it to 3 more finals – Maharshtra Open in India, the Brasil Open in Brazil and the Estoril Open in Portugal.

Jonny has also featured at the hallowed turn of Wimbledon in the many tournaments played across the world.

Jonny grew up in Arbroath attending Arbroath High School and follows the Lichties, often representing by wearing his Arbroath top. 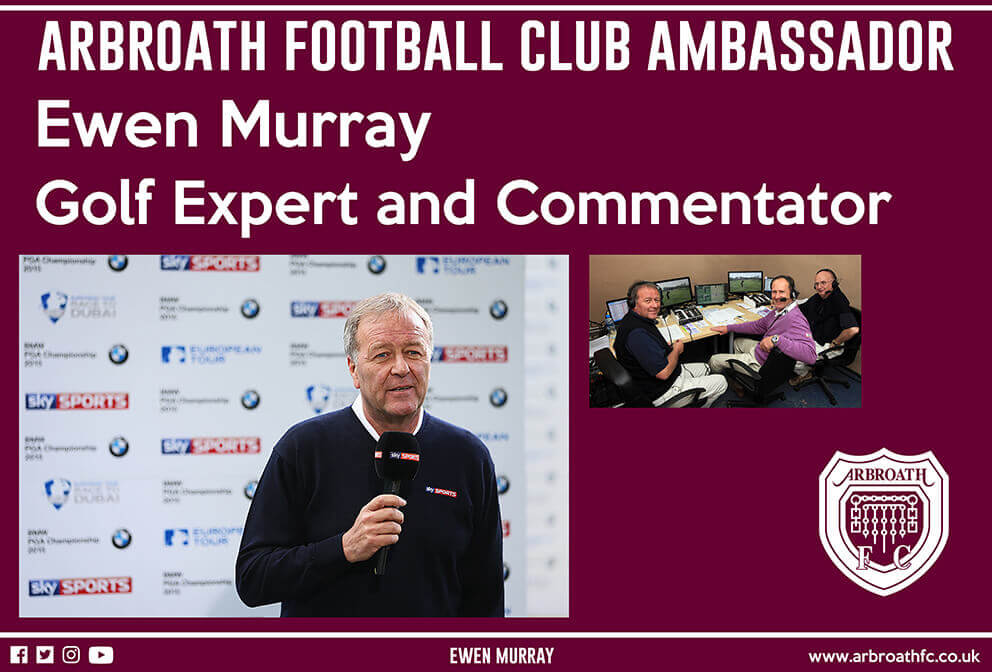 Ewen Murray is a retired Scottish professional golfer who played on the European Tour.

He is now better known as a golf commentator having recently celebrated over 25 years of golf coverage on Sky Sports. He turned pro in 1971 and won both the 1980 Zambia Open and the 1984 Nigerian Open.

Ewen’s first commentary role came in 1990 at the Desert Classic in Dubai. He then commentated on the 1991and 1993 Ryder Cups before taking on commentary full time when he joined Sky Sports ahead of the 1995 Ryder Cup at Oak Hill Country Club in New York.

Ewen has enjoyed several online Twitter wagers and banter with fellow commentator and Clyde fan Dougie Donnelly when the teams played one another last season.

Ewen’s father hailed from Arbroath and supported the Lichties and his father’s brother, Frank was a Director at Gayfield. 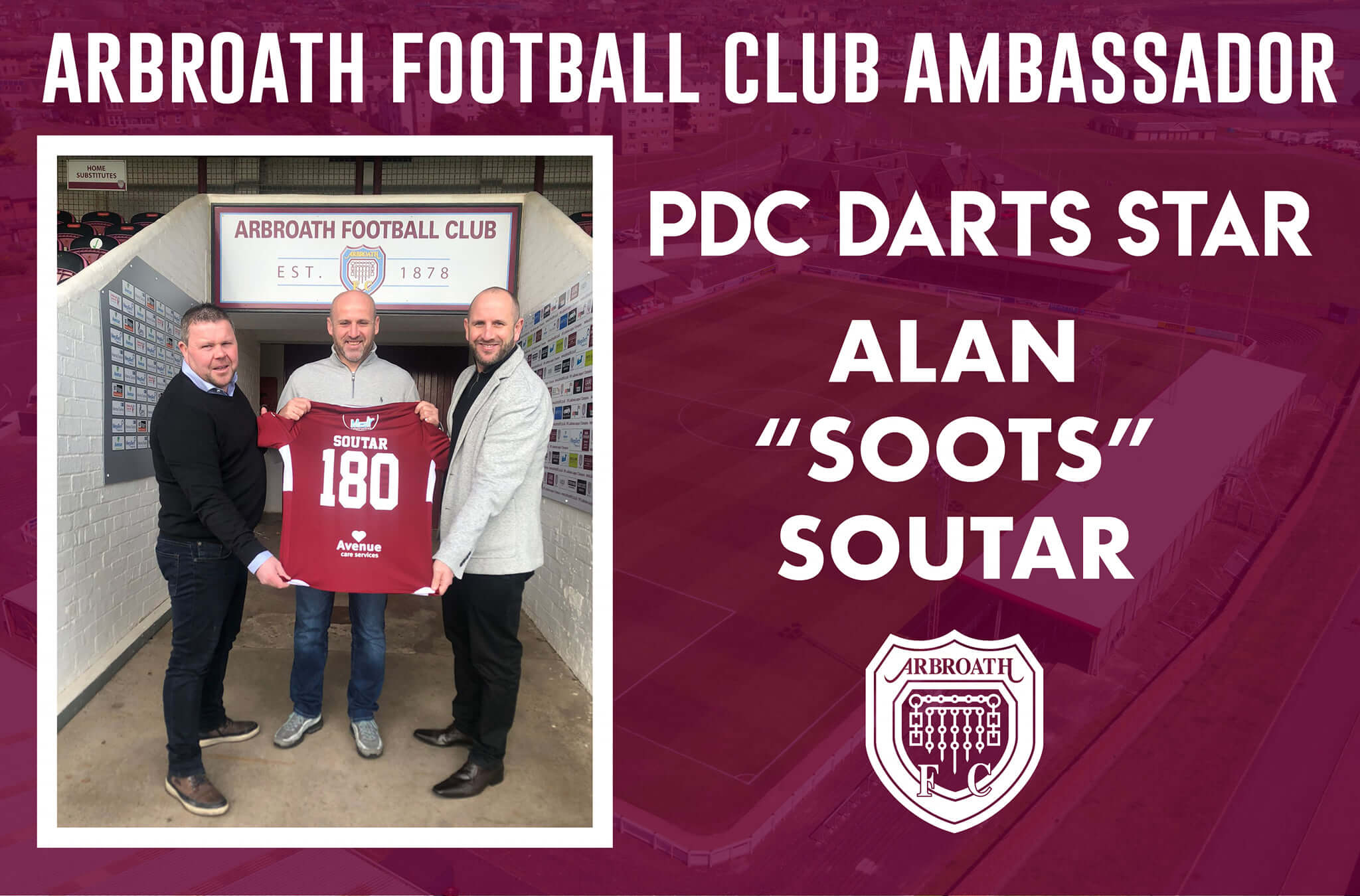 Alan “Soots” Soutar has been making incredible progress since coming through Q-school, turning professional and winning his tour card on the PDC.

Soots, who is also a fire fighter continues to play a massive part in the local community supporting many charities as well as running his own darts academy for the stars of the future. Alan burst onto the scene earlier this year defeating former world champion Raymond Van Barneveld in his very first televised PDC event and is currently sitting 79th in the world.

Arbroath Football Club Commercial Director Paul Reid spoke of the announcement; “We are delighted that Alan has joined our club as an ambassador, he is doing incredibly well on the PDC tour and continues to put our town on the map with his fine form and rapid rise through the rankings, he is immensely proud of his home town roots and we are equally as proud of his achievements as well as playing a huge part in our community, everyone at Gayfield is right behind him and we cannot wait to cheer him on in the World Championships next month.”

Alan said “It was a proud moment when asked to become an ambassador of the club, I am immensely passionate about the town and the team and to have been asked is a huge honour, its exciting times at Gayfield and I am really looking forward to being a part of that.”

Arbroath Football Club is proud to have fans from far and wide, and we are excited to announce the appointment of Alan as our newest Ambassador. 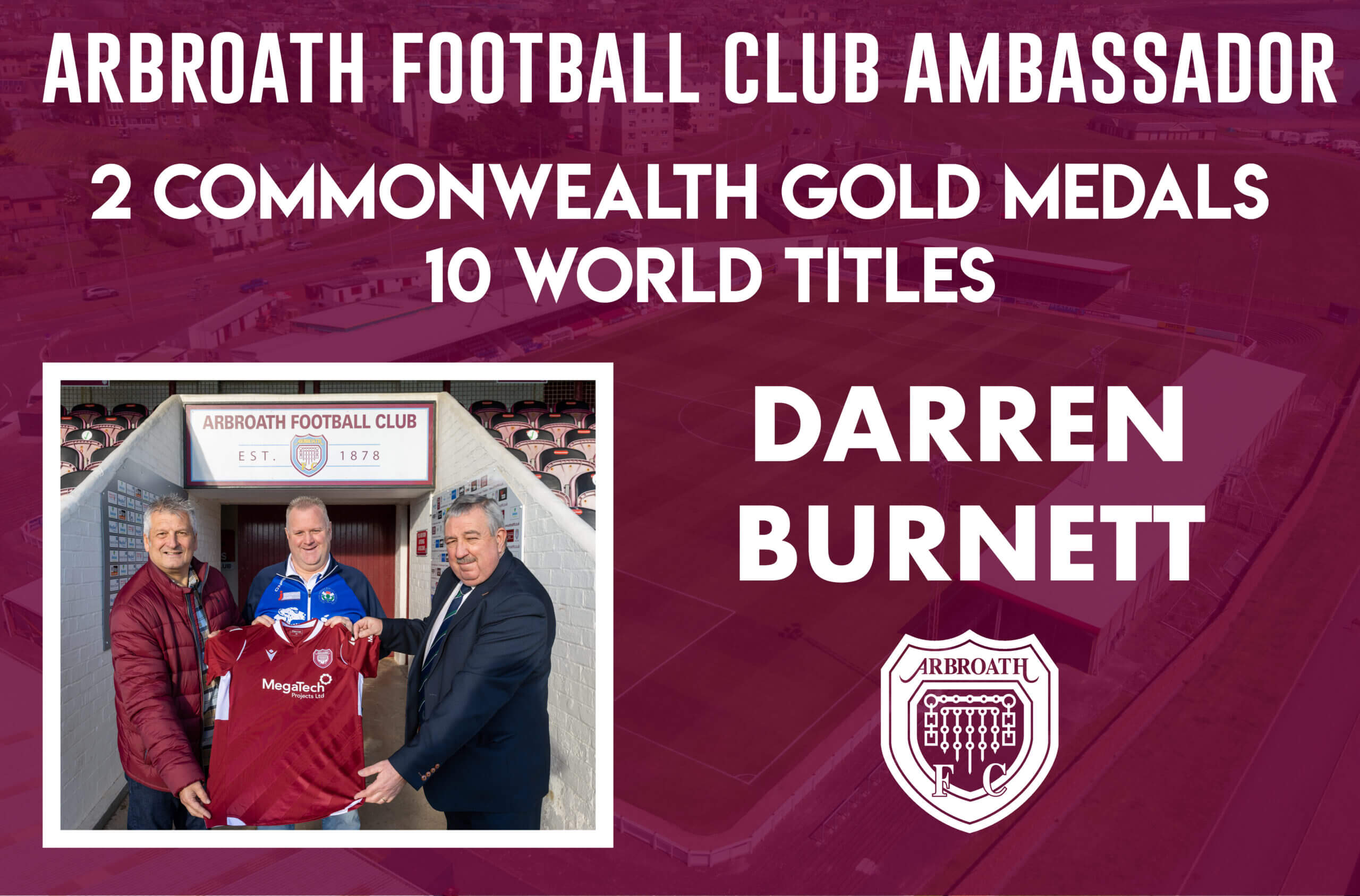 As well as playing bowls around the world, Darren is a very “well-kent-face” around Arbroath, from his work as a police community officer as well as being down at Gayfield as a season ticket holder for many years cheering on the Lichties.   On top of all of this Darren is now a coach for the Girls U11 team for the Arbroath Community Sports Club.

Darren said “I am delighted to join Jonny, Ewen and Alan and look forward to helping the club and working in partnership in any way we can. I am proud of what I have achieved in my own sport so far and always enjoy getting Arbroath recognised on the sporting map.

We have produced many talented individuals over the years for our town size and the current achievements being reached by the players, management and board at the football club has created a great community spirit.”

Proudly representing Scotland Darren has played for his country on numerous occasions at the very top with his most notable victories coming in the Commonwealth games where he secured Gold in the 2014 Glasgow games for the Men’s singles, then winning a second gold in Australia 4 years later in the Men’s Triples alongside Ronnie Duncan and Derek Oliver.

Success has also come 4 times in the World Outdoor Championships where he won silver in the 2008 Christchurch finals in the Men’s Pairs, before winning a gold and bronze in Adelaide in 2012 in first the Men’s triples and then the Men’s fours before he added another bronze in the Men’s singles in Christchurch in 2016.

Turning to the World Indoor Bowls Championships Darren has 3 golds, winning his first in 2014 in the Singles, before winning gold twice in 2016 in the open pairs and also the mixed pairs.

Darren’s first major honours came in 1999 by winning the World Indoor Junior Singles Gold Medal which he won for four consecutive years before being eliminated by age.  Further gold medals have been achieved at National and British Isles Indoor Championships where Darren became the first Scottish player to win every National and British Discipline including pairs and Triples wins with his late Father, Willie and Brother, Ryan. Darren has also been the Scottish Outdoor National Singles Champion in 1999, 2002 and 2005 which is a record he shares with Joesph Black, David Dall and Robert Sprot.

Hoping to add more medals to his already huge collection Darren was selected for the 2020 World Outdoor Bowls Championship in Australia but unfortunately due to Covid that event was cancelled.

However Darren, who is currently number 11 in the World Rankings (his highest ranking position was number 3 back in 2011) is hoping that he will be again competing in the 2022 Commonwealth Games which will be held in Birmingham where will be cheering him on again!

Mike Caird, Arbroath Football Club Chairman says “ I’m delighted to welcome Darren as our latest Ambassador. The great success that Darren has enjoyed over the years in bowls has not only taken him to the very top of his sport but has helped put his home town of Arbroath firmly on the sporting map.”

Arbroath Football Club is proud to have fans from far and wide, and we are excited to announce the appointment of Darren as our newest Ambassador. 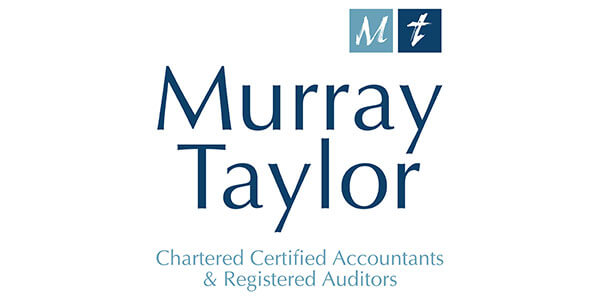