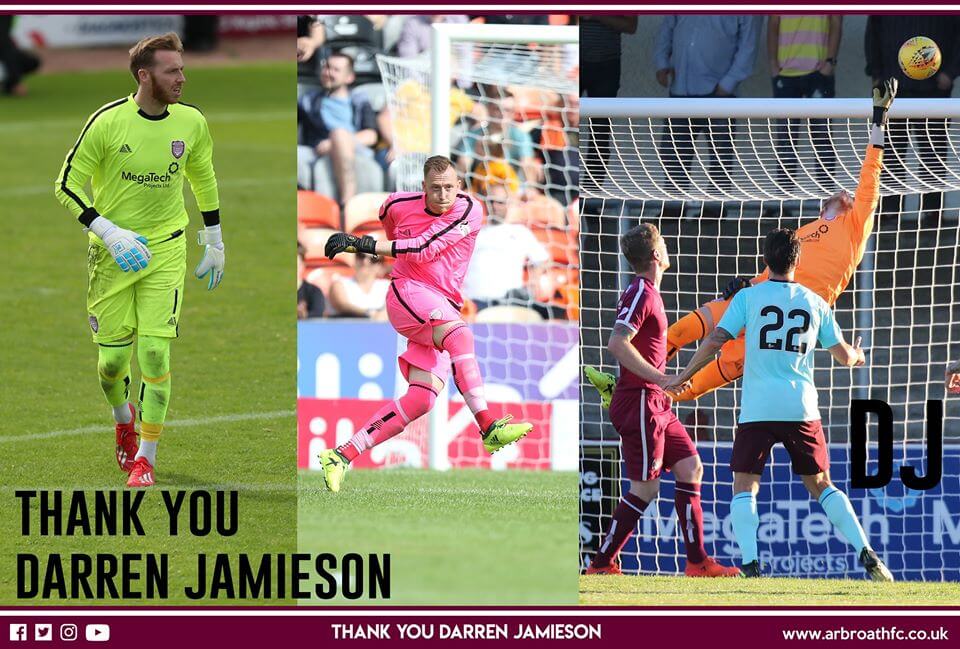 Arbroath FC can confirm that goalkeeper Darren Jamieson is leaving the club after an incredibly succession 2 seasons where he played a pivotal role in our League One Title.

DJ has been a firm fan favourite since arriving at Gayfield in May 2018 after spending two seasons with Hamilton Academical and made his competitive debut against Dundee Utd at Tannadice in the Betfred Cup.

In 2018 / 2019 Darren went on to make 35 league appearances, securing 10 clean sheets and being a pivotal part in our defence which had the best defence in the league conceding only 38 goals as we led League One from Game 1 to Game 36

In addition to that Darren also made 3 appearances in the Betfred Cup, where he also kept one clean sheet and a further appearance in the Scottish Cup.

This season Darren has made a further 10 appearances for the Lichties and another 3 clean sheets, starting the first 7 games of our 26 game Championship season, with a further 2 starts in the Betfred Cup and a further start in the Scottish Cup.

DJ has made the day of many of our young Lichties throughout his two seasons as he has taken time to speak to them and give them his goalkeeper gloves as well as always engaging with all our supporters.

It’s been a pleasure having Darren at Arbroath FC, and Darren leaves Gayfield with the best wishes of everyone at Gayfield for the future.

All the very best DJ!