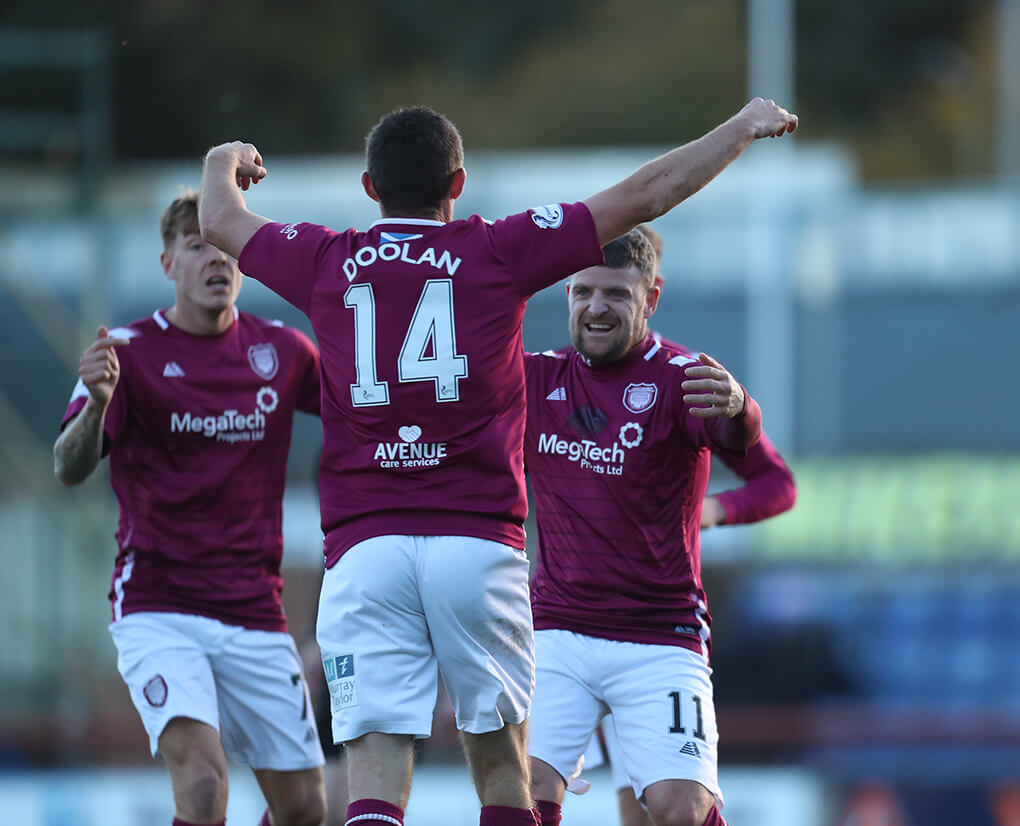 It seemed like the Gayfield wind followed Arbroath up to the Highlands on Saturday as the Caledonian Stadium was blasted by gale force wins throughout.

It was the Lichties who had the wind behind their back in the first half and looked positive in the early stages with Connor Smith having the first chance for the Lichties in the 13th minute but his shot was wide of the far post.

Colin Hamilton was next to have an attempt at goal but his shot across the goal from the left wing was saved by Mark Ridgers, however the Lichties were celebrating just 3 minutes later when Bobby Linn broke down the left wing before crossing the ball into the box where Kris Doolan made no mistake from 1 yard at the back post to score our first Championship goal of the season.

The wind was a challenge for both sides as it blew across the pitch as both sides struggled at time to hold onto possession. A Bobby Linn shot was blocked outside the 18 yard box in the last chance in the first half.

It sadly didn’t take Inverness Caledonian Thistle long to equalise with an ever increasing wind at their backs as a quick corner in the 47th minute allowed Daniel MacKay to nod in the equaliser at the near post.

The Lichties did have win a series of free kicks as the looked for a second goal with a Connor Smith effort just flying over the bar in the 50th minute after a foul on Kris Doolan, before a hand ball by Brad McKay allowed Bobby Linn to strike a free kick but the wall blocked his effort in the 63rd minute.

Inverness took the lead in the 71st minute when a long range strike by Scott Allardice flew past Derek Gaston into the far corner of the net. Inverness definitely were full of confidence and Daniel McKay had a shot saved just a minute later before Allardice tried his luck from range again only to have his shot blocked. McKay again had another strike blocked before missing wide of the right hand post.

Arbroath introduced Luke Donnelly, Michael McKenna and Dale Hilson for Kris Doolan, Connor Smith and Bobby Linn as he tried to get the Lichties back into the game.

A handball on the edge of the Inverness box went unpunished and just 60 seconds later Inverness had their third goal as Roddy MacGregor set up Nikolay Todorov for his 3rd goal in 3 matches.

Luke Donnelly did well in the box before a Ricky Little shot was just wide after a corner in the 89th minute but there was no comeback for the Lichties.

Arbroath now have 3 games in a row at Gayfield and will be hoping to get their first points on the board. The Championship is again proving to be one of the hardest leagues to predict with the margin between a win and a loss down to very small margins.