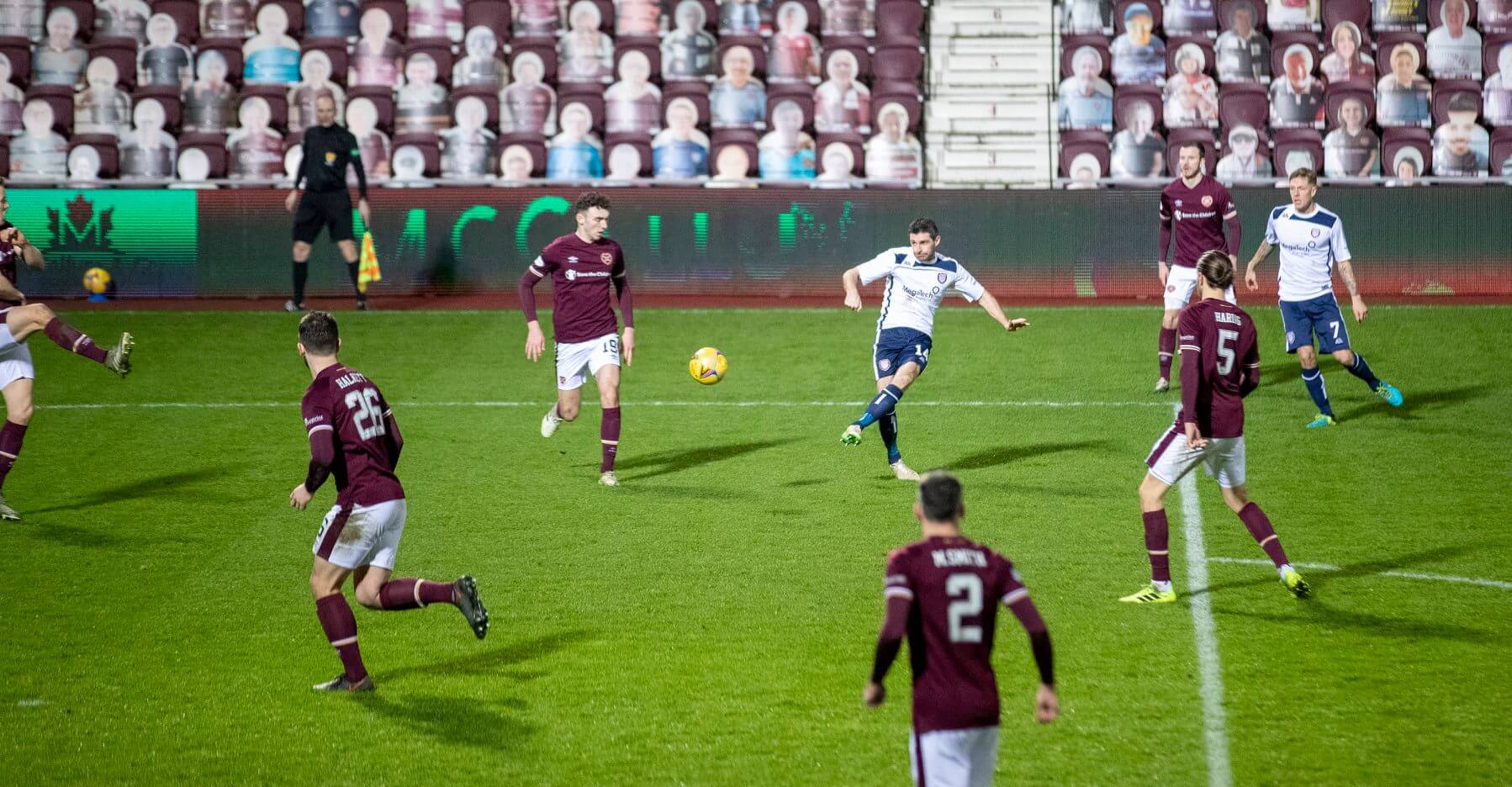 Arbroath went into the match with two changes from Saturday’s match as Dick Campbell kept the 4-4-2 formation which has seen the Lichties create more chances in recent games.

Dale Hilson was missing, whilst Connor Smith was ineligible to play against his parent club, so Gavin Swankie came in for Michael McKenna and Kris Doolan replaced Dale Hilson to partner Luke Donnelly up front.

Tynecastle had changed dramatically since Arbroath last played there in 2015, and as the sides ran out we are always aware of how much we miss our supporters and we know you would have all enjoyed the night out in the Capital.

It was the Lichties who had the first half chance when a foul by Craig Halkett on Luke Donnelly allowed Colin Hamilton to latch onto a free kick at the back post but his header was just over the bar in the 4th minute.

There was very little between the sides in the open exchanges with both sets of defence doing well to keep the ball away from their goals.

Liam Boyce did manage to break the Arbroath offside but his right footed strike was wide of the far post in the 16th minute.

Just 5 minutes later and Boyce was forced off with an injury and replaced by Jamie Walker.

Arbroath were looking lively and certainly weren’t daunted by the opposition and were pushing forward whenever possible.

As the first half entered the final 15 minutes nobody could have guess how the next 6 minutes were to play out.

Derek Gaston hadn’t been forced into making a single save, but a counter attack from Hearts in the 30th minute allowed Peter Haring to play a defence splitting pass to Jamie Walker who had found space in the box and his cross found Naismith at the back post who made no mistake from 4 yards to open the scoring.

Hearts scored their second goal of the night just 2 minutes later. A good move set up by Naismith played down the left wing actually seen the Scotland striker look up and pass the ball to Walker who completely scoffed the ball from 18 yards out but his miss hit was picked up and played out to Michael Smith whose deflected strike fell to Naismith who was lurking at the back post and he headed in from 4 yards out. The Arbroath players appealed for offside but it didn’t come due and Hearts had doubled their lead inside of 2 minutes.

It was to get worse for the Lichties just 4 minutes later. An Olly Lee corner kick from the training ground found Andy Irving at the edge of the box and as he went to strike the ball Colin Hamilton slid in to make the block but the ball ricochet off his arm and Referee Nick Walsh pointed to the spot and Colin Hamilton made his way into the referee’s book.

Steven Naismith stepped up and made no mistake from 12 yards to claim his hat-trick.

Arbroath found themselves 3 goals down, yet hadn’t played badly. It was slightly surreal to those watching the game and again Arbroath haven’t had that bit of fortune or luck this season.

Craig Wighton could have made it 4 in the 38th minute but his header missed Derek Gaston’s right hand post.

A corner kick for Arbroath in the 45th minute almost resulted in a Kris Doolan goal but again Craig Gordon made another spectacular save to deny Arbroath.

Half time – Heart of Midlothian 3 – 0 Arbroath

Neither side made any changes at half time as Arbroath looked to get back into the game and they did just that in the 47th minute.

A free kick by Ricky Little deep just inside the Heart’s box was miss hit by Andy Irving who was lucky not to concede a penalty as the ball struck off his arm but Kris Doolan was quickest to reaction and showed great skill to hit the ball first time curling it over Gordon and into the back of the net.

Bobby Linn was introduced in the 51st minute as Gavin Swankie was forced off with a strain before Scott Stewart replaced Luke Donnelly in the 57th minute.

There was very little again between the sides with Derek Gaston making a save from Wighton in the 63rd minute.

Michael McKenna replaced James Craigen in the 72nd minute with Craig Wighton joining Colin Hamilton in the book after a late tackle on Bobby Linn in the 75th minute.

Christophe Berra was forced off a minute later after a clash of heads with Scott Stewart, before Mihai Popescu replaced Olly Lee in the 79th minute.

There was very little in the way of action at either end with Jamie Walker and Scott Stewart picking up yellow cards in-between a Colin Hamilton shot which was high over the bar after a nice build up.

It was a very hard result for Arbroath. A 6 minute spell killed the game with the other 84+ minutes being played out with nothing really to write about for either team. Arbroath will be hoping that little bit of luck will come their way in 2021.

Every game is tough in this Championship season, and another tough tie awaits as Inverness Caledonian Thistle visit Gayfield on Saturday.