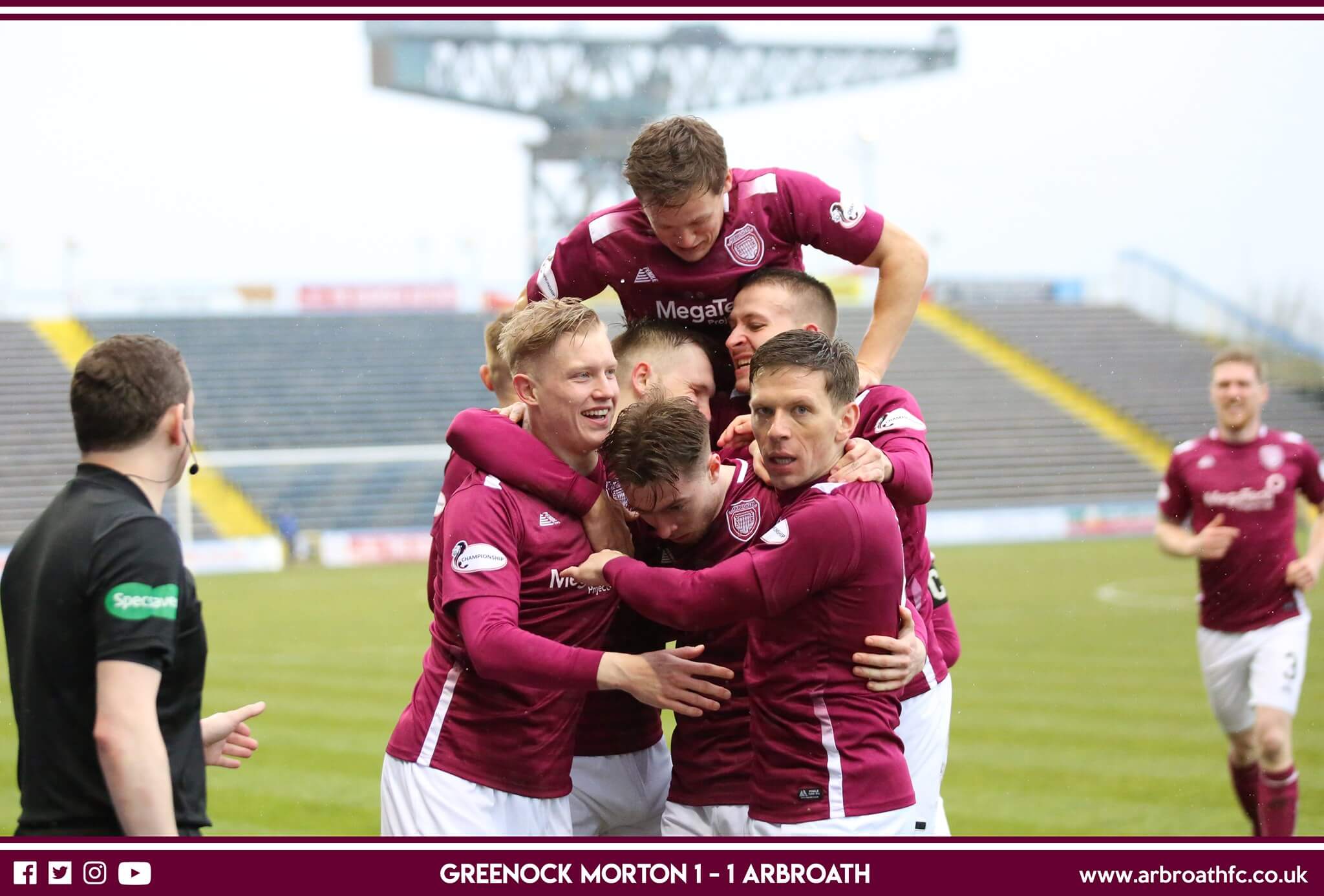 Perhaps the hurt and frustration of Greenock Morton’s 95th minute equaliser shows how far we have come as a club.

A point away to the form team in the league would be acceptable to most, but today Arbroath showed how far we have come in a matter of seasons when a draw away to a full side Championship side felt like a defeat.

Arbroath Manager Dick Campbell made 3 changes to the starting line up with James Craigen, Luke Donnelly, Scott Stewart all came into the side with Mark Whatley, David Gold and Gavin Swankie dropping out.

The Lichties attacked towards the iconic titan crane in front of the Lichties who had made the trip south and Arbroath took the game to Greenock Morton from the get go.

Scott Stewart and James Craigen were pulling the strings in midfield whilst Wighton and Hilson attacked down the flanks with Luke Donnelly spearheading the attack, with Miko Virtanen again chasing and winning every ball in front of our back four of Thomson, Little, O’Brien and Hamilton with Gaston in goal.

James Craigen had a shot blocked in the 14th minute as Arbroath looked to turn their early possession into a goal.

The Lichties came even closer after a sweeping move fed in Craig Wighton who timed his run to perfection but Danny Rogers pulled off a stunning save in the 24th minute.

Morton had the ball in the back of the net in the 28th minute but the referee’s whistle had blown for offside before Nicky Cadden struck the ball.

A bizarre moment in the 39th minute almost led to a controversial point in the game. Dale Hilson won a free kick which he took, but the ball flew into the face of Morton defender Reghan Tumility.

Referee Steven Reid quickly stopped the game as Tumility looked to be out cold. However after treatment he was back on his feet.

Despite Arbroath having possession, the ball was given to Rogers who launched the ball upfield with Kalvin Orsi claiming he had been fouled by Derek Gaston who had leapt into the air to claim the ball.

Dale Hilson had a shot from 18 yards blocked before Craigen was again denied by Rogers just before half time.

Reece Lyon replaced Tumility at half time for Morton as Arbroath picked up where they left off on the attack.

Craig Wighton opened the scoring in the 49th minute. The ball was half cleared by the Morton defence and Wighton hit the ball first time from 16 yards out and his angled shot found the far corner of the net.

Morton did have possession of the ball but were wasteful and as Arbroath forced another corner on the hour mark the Cappielow faithful started to get on their side with a series of boos.

Kalvin Orsi was replaced by Bob McHugh in the 65th minute which was again a decision boo’d by the home support, but there was a cheer when John Sutton replaced Robbie Muirhead in the 72nd minute.

A minute later and Arbroath should have made it 2-0. Craig Wighton went on a run down the right wing showing great skill beating his man with a nutmeg before running into the box and playing the ball into the path of James Craigen but his shot was just over the bar.

A Nicky Cadden free kick in the 78th minute was the first save Derek Gaston had to make on his return to his former club.

Mark Whatley and Omar Kader came on for James Craigen and Luke Donnelly before Bobby Linn replaced Dale Hilson in the 89th minute.

A cross from Bobby Linn just seconds later bounced off the Morton crossbar.

In the final minutes Morton pushed everyone forward as they sought an equaliser. The game was deep into injury time when Morton won their second corner in succession and towering defender Sean McGinty took advantage heading the ball across the goal and into the corner of the net.

Heartbreaking as the goal seemed to come in the 5th minute of injury time.

However with 3 wins and 2 draws, the Lichties are undefeated in 5, and have 3 clean sheets in those 5 games with the second best defensive record in the league.

10 huge games remain now, and with all other teams apart from Alloa winning, it is another point towards safety.

Thank you to those fans who travelled and we hope you will join us on Saturday as we welcome Inverness Caledonian Thistle to Gayfield.