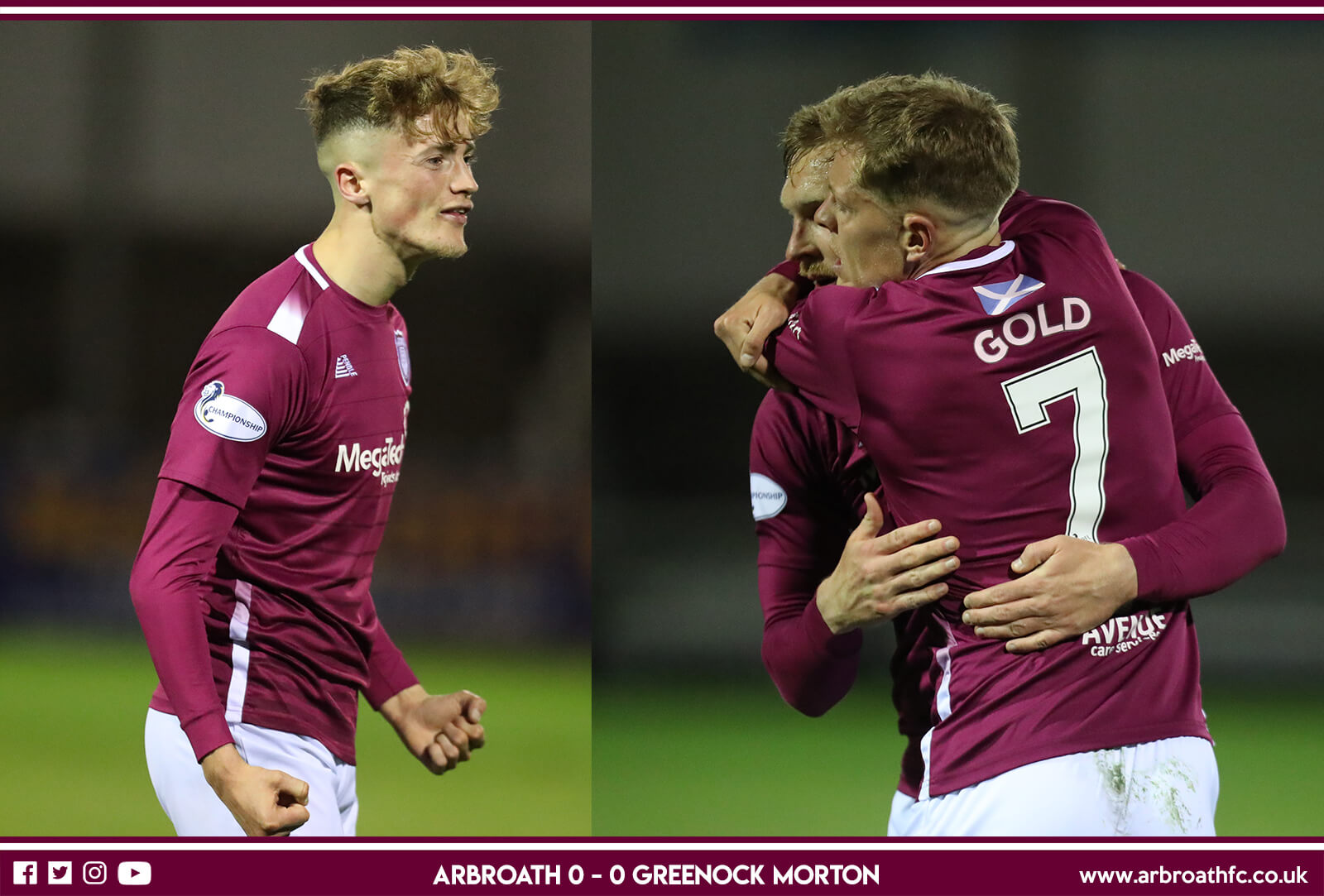 Arbroath clinched their place in the SPFL Championship for the 3rd season in a row after a goalless draw at Gayfield on Friday night against Greenock Morton.

The draw, combined with Ayr United pulling back to draw 2-2 away to Inverness Caledonian Thistle means that it is Greenock Morton who face the relegation play-off against the League One sides.

Dick Campbell made only one change to his stating eleven with Scott Stewart replacing David Gold in midfield whilst there was a surprise inclusion of Bobby Linn on the bench which was a huge boost for the Arbroath team.

On a very calm evening the Lichties attacked the Harbour end in the first half but it was Greenock Morton who looked to have the bit amongst their teeth as they start off in control and were first to every second ball.

However it was Arbroath who had the first strike at goal with Nicky Low just firing over from 25 yards in the 9th minute.

The game certainly wasn’t a classic as both teams really struggled to test the goalkeepers.

Greenock Morton’s Gary Oliver claimed for a penalty kick with Thomas O’Brien claiming a penalty after being bundled to the ground during a corner kick in the 42nd minute but neither were given.

In the 44th minute Jason Thomson was injured in his own half and was replaced by David Gold.

The final play of the first half seen a long ball from O’Brien being chased down by Jack Hamilton who raced into the box but Markus Fjortoft was able to hold Jack off and clear.

Aidan Nesbitt had a shot blocked by Ricky Little in the 48th minute as Morton went looking for a much needed goal early in the second half.

Arbroath definitely should have had a penalty in the 57th minute when Jack Hamilton chased a long pass by O’Brien with a mix up between Morton keeper Aidan McAdams and defender Markus Fjortoft with both players hesitating, Hamilton pounced and was pushed over by Fjortoft.

The Arbroath bench and players all claimed for the penalty and Robert Douglas found himself with a yellow card for his protests to the assistant linesman.

A Nicky Low free kick was headed wide of the goal in the 62nd minute by Thomas O’Brien as Arbroath looked for a goal.

Greenock Morton’s night took a turn for the worse when Captain Sean McGinty was shown a straight red card as his boot caught Scott Stewart with a high lunging challenge on the half way line.

Jack Hamilton who had suffered a knock in the penalty claim challenge was unable to continue as he struggled to move freely and he was replaced in the 72nd minute by Luke Donnelly.

As the clocked down both sides were still looking quite nervy, thankfully Brian McLean’s header from a Morton corner in the 79th minute was wide as the 10 men pushed for a goal.

Nicky Low showed great skill to make a space to shoot but he was eventually snuffed out by the ball fell to Ben Williamson and his shot was blocked after 82 minutes.

A corner in the 91st minute really pushed Arbroath’s nerves to the maximum as goalkeeper Aidan McAdams came up and wasn’t far away as the ball went out for a goal kick.

After 4 minutes of injury time Referee Gavin Ross finally blew his whistle and the Arbroath players embraced one another knowing they had achieved what seemed impossible just after Christmas.

A fantastic result after a very difficult season but one every single player can be proud of!