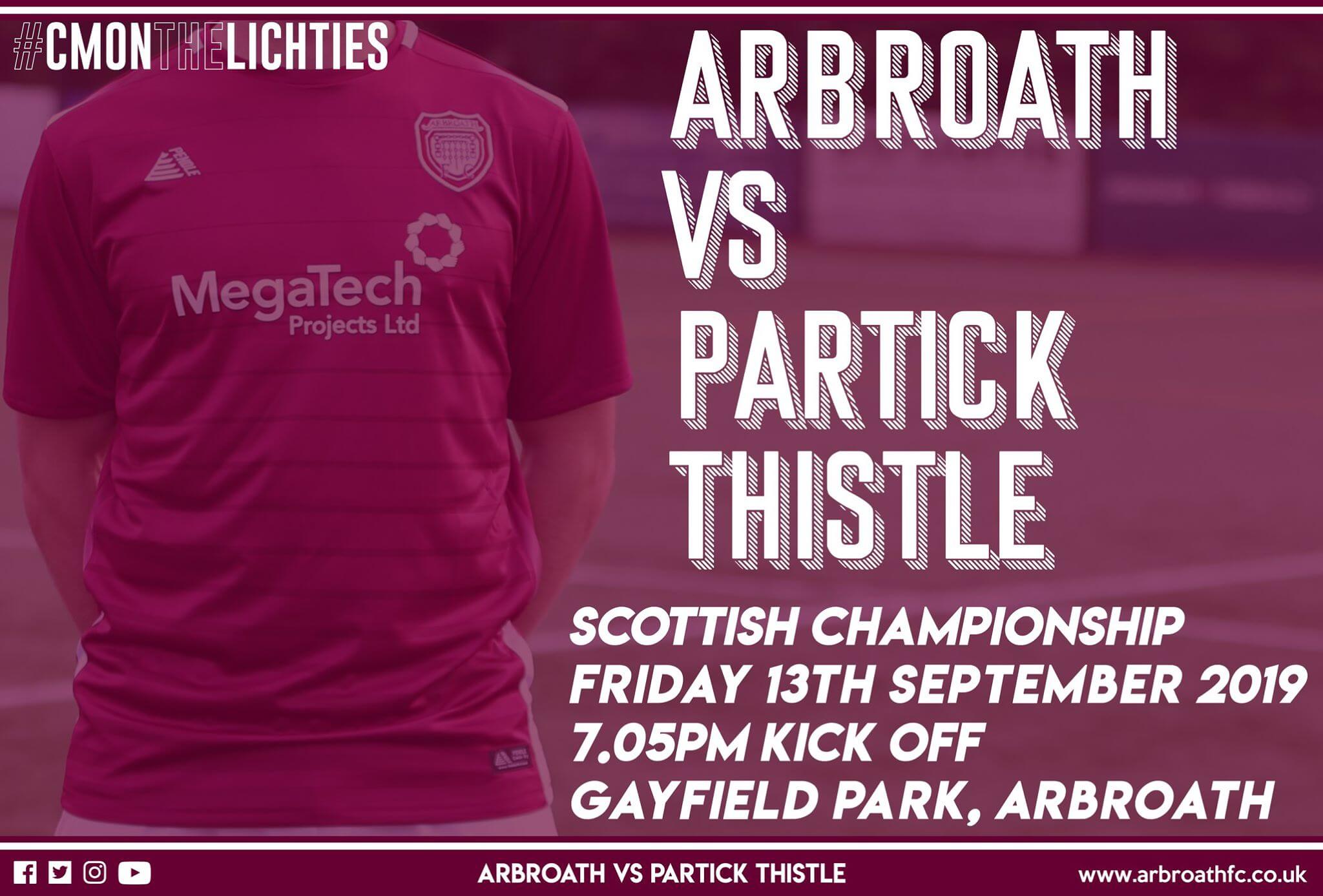 Arbroath welcome Gary Caldwell’s Partick Thistle to Gayfield tonight for our match under the floodlights, live on BBC Scotland with the earlier kick off at 7.05pm.

It is the first time we have played Partick Thistle in a competitive match since the March 2nd 2012 when we drew 2-2 at Firhill, with the Lichties claiming a 1-0 victory over the Jags just a few days earlier on the 26th February 2012 thanks to a 39th minute goal by the late John McGlashan.

There will be a very familiar face in the Partick Dugout as former Lichtie and fan favourie, Brian Kerr is the assistant Manager at Firhill.

Partick Thistle have only picked up 1 point so far in the Championship but we know that they will be determined to get back to winning ways as the country watches live on BBC Scotland.

The Jags will be without midfield duo Shea Gordon and Stuart Bannigan due to suspension as they were both sent off against Ayr United, with striker Alex Jones also likely to miss out due an ankle injury.

However with experience all through out their side, players such as Joe Cardle, Gary Harkins and former Scotland striker Kenny Miller in their ranks it will be a tough night for the Lichties.

Arbroath Manager Dick Campbell has a headache selection in whether to keep faith with his side that recorded a victory over Dunfermline Athletic or keep his side that defeated Dundee United in the Tunnock’s Caramel Wafer Cup last Saturday.

Gavin Swankie and Scott Stewart will both still be missing due to injury but Miko Virtanen will return to the Arbroath squad after being away on international Duty with the Finnish U21 side.

There is an added element to tonight’s game as Arbroath physio Anna Murray also plays for Partick Thistle Ladies on Sunday as they take on Heart of Midlothian.

It will be another extremely tough game for the Lichties but with your backing anything is possible as we have already shown this season.

Shea Gordon and Stuart Bannigan are both suspended for Partick Thistle 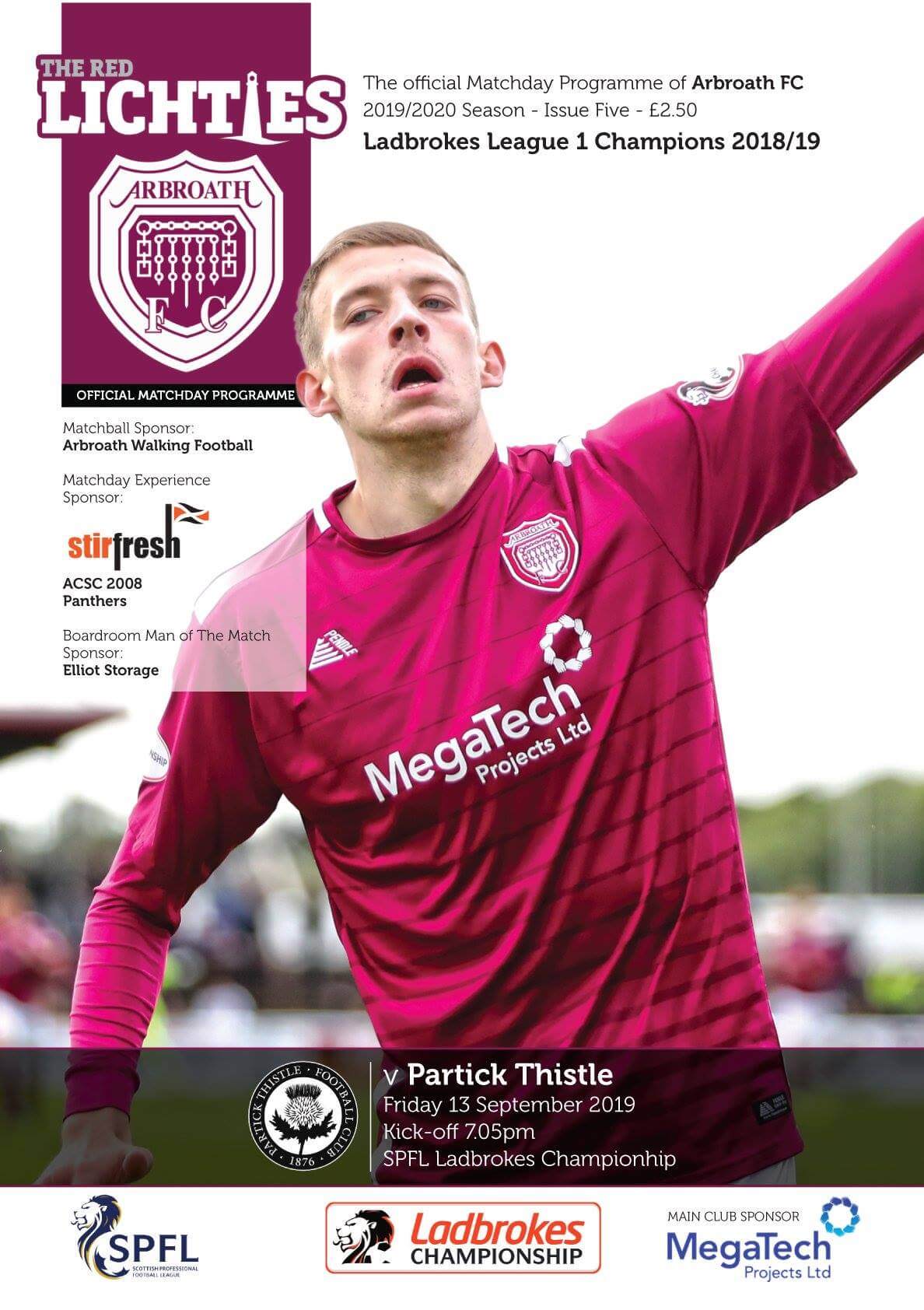 Tonight’s programme will be on sale just inside of Gayfield and is the 5th programme of new season and is priced at £2.50 with Luke Donnelly on the front cover.

How to watch BBC Scotland;

Pay at the Gate – Cash Turnstiles in operation.

Admission allows you access to the entire ground, both the stand and terracing. 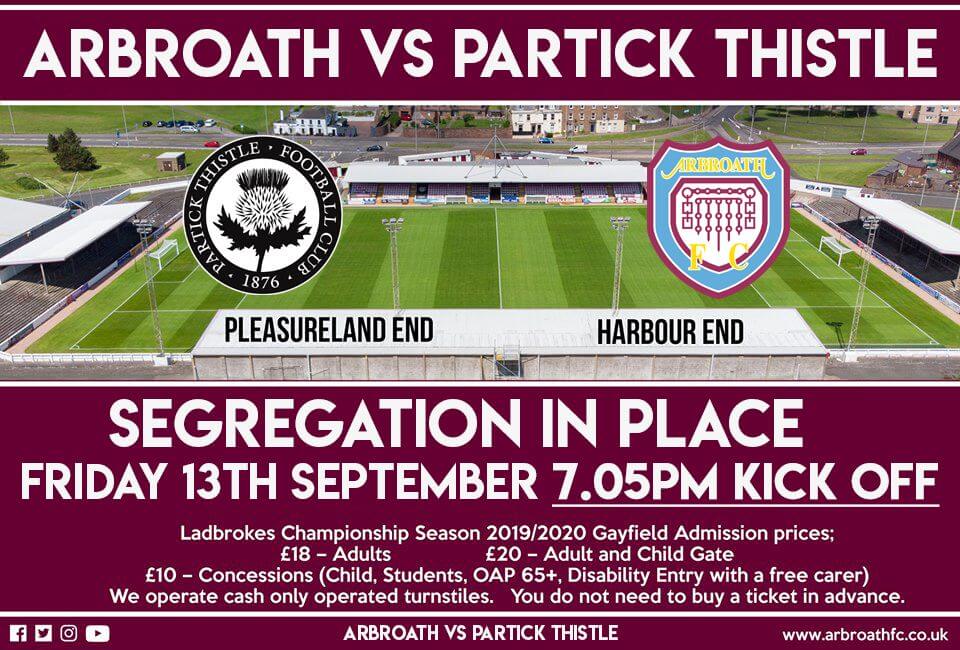 Would all supporters attending tonight’s Ladbrokes Championship match between Arbroath and Partick Thistle at Gayfield Park on Friday 13th September please note that supporter segregation will be in place.

A large crowd is expected with Arbroath hosting Partick Thistle for their third home match of the season.

It is acknowledged that this decision does restrict the normal movement of supporters inside Gayfield however it is an absolute club priority to ensure that all Supporters can attend the match in a safe and friendly environment and enjoy the football on show.

Arbroath FC supporters will occupy the Harbour End of Gayfield, which will sweep round to the the TV Gantry whilst also gaining access to the Harbour side of the Main stand.

Partick Thistle supporters will be allocated to the the Pleasureland End (Switchie End) of Gayfield whilst also being permitted to Sections A and B of the Main Stand.

We expect a large crowd to watch this evenings anticipated fixture.

Your co-operation of the segregation arrangements is greatly appreciated by both clubs.

These areas also have wall attached seats which fold down in place for any assistant or carer that is present on the day.

Each side is accessible via a smooth flat surface suitable for wheel chairs with a disabled toilet on the opposite side of the stand.

Our match day stewards are always on hand to give assistance either into the ground, or to the accessible areas.

Unfortunately due to Gayfield’s location we don’t own any parking spaces around the ground, but there is plenty of spaces on either side of the ground to park which is all completely free.

If the distance from the main gate to the accessible area is too far, then we are happy to accommodate a vehicle into the ground for a close drop off. In this circumstance we would please ask that you contact the club a day or two before hand and arrive a little earlier than normal.

We offer a concession admission for those with a disability and free admission to any assistant or carer present.

We are a community club and hope to give all visiting and home fans the same experience as they are welcomed into our ground.

Unfortunately due to Gayfield’s location we don’t own any parking spaces around the ground, but there is plenty of spaces on either side of the ground to park which is all completely free.

If you are coming from the direction of Dundee, there are many spaces on Queen’s Drive next to Pleasureland, of if you continue past Gayfield there is Inchcape Park which is your first right after Gayfield. It is next to the Sea which offers street and overspill onto the grass.

Full Details can be found on our website – https://www.arbroathfc.co.uk/match-day-information/

We hope to see another fantastic support for our third home Championship game of the season cheering on the Lichties!