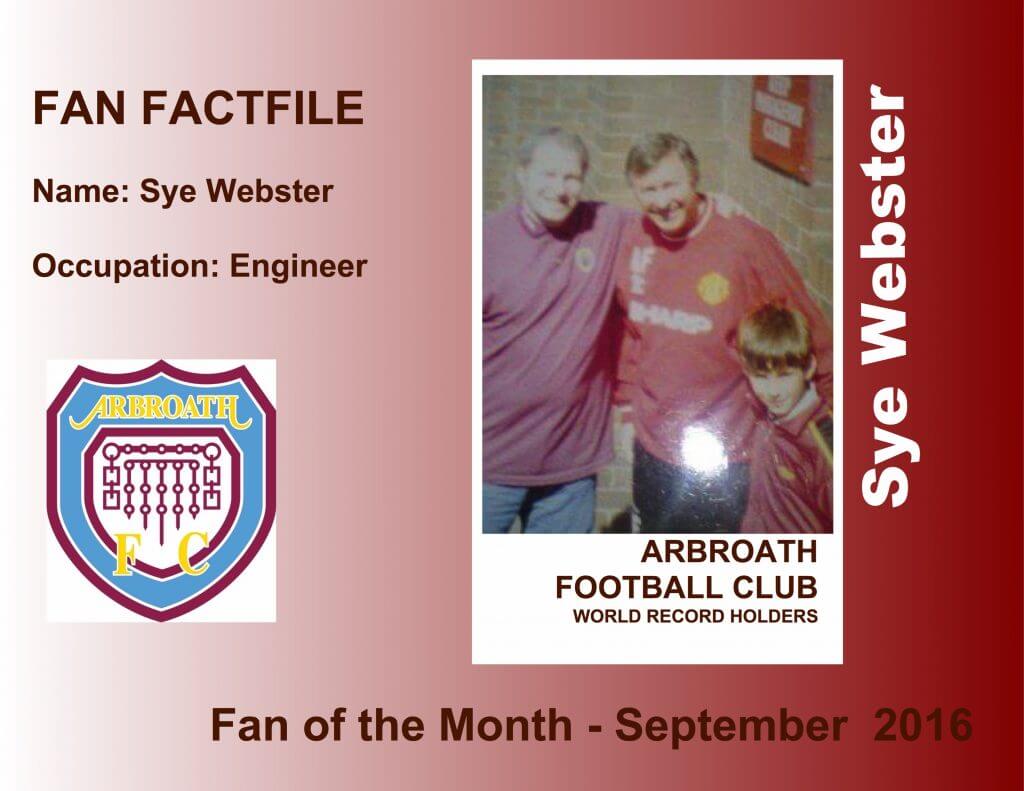 Q1 How many years have you supported the club.
A1 All my life, 52 years.
Q2 Favourite place to watch the match inside Gayfield.
A2 Behind the goals, maybe not the best view but it has always been a tradition.
Q3 Favourite away ground that you have watched Arbroath play.
A3 Would have to say Ibrox and Parkhead but at our level it seems weird to watch the Red Lichties playing at Hampden Park against Queens Park, at Tynecastle last season was also good.
Q4 Do you prefer standing or sitting to watch a football match.
A4 Standing 100%, I am sure any ground can have safe standing, in the 70’s/80’s when the Red Lichties regularly played against Dundee/DUFC/Hearts/Hibs/Aberdeen/Raith/DAFC/Falkirk and the Old Firm the atmosphere was far superior than visiting any of those grounds nowadays because there was terracing and everybody grouped together, now I realise safety is paramount but I have been to Dortmund’s ground so I they can do it then any club should be able to have a safe standing area.
Q5 Most memorable Arbroath match that you have seen.
A5 Hard one, I would love to say the Championship winning game but obviously I only ever seen the first 6 minutes of it, away to East Fife at the old Bayview when we won 5-2 to meet Rangers in the Scottish Cup in 1993 would be up there as would be at Parkhead when Stevie Doris score the last minute equailiser.
Q6 Best player you have seen play for Arbroath.
A6 Another hard one probably Andy Penman, I remember him scoring direct from a corner kick t Gayfield and telling the crowd he was going to do it before he took the corner kick, but my hero was King Jimmy Bone.
Q7 What is your hopes this season for Arbroath.
A7 To win the league, we have a good enough squad to do it, at the very least promotion.
Q8 Any funny stories during your time following the club.
A8 Just the characters who have followed this club over the years, in the 1970’s/early 80’s when drink was allowed in the ground just lets say we had a pretty tough set of fans and it was pretty scary and mental at some home and away games but the older lads always looked after us young ones so it was like one big family supporting the Red Lichties in those days when we were growing up. Recently when that wave hit Bobby Linn taken a corner-kick and further back when we told sports reporter Graham Speirs that we picked up a live haddock on the far away terracing and put in our pocket for our supper he reported this in his newspaper!!.
Q9 Any pre or post match superstitions.
A9 Always kiss my wife Denise for luck on the doorstep before heading to the match and always wear the same AFC top when we are on an unbeaten run.

In my AFC XI please note I am not including any present day players but I am sure Bobby Linn will be in a future squad.
Also it is 3-5-2 formation.