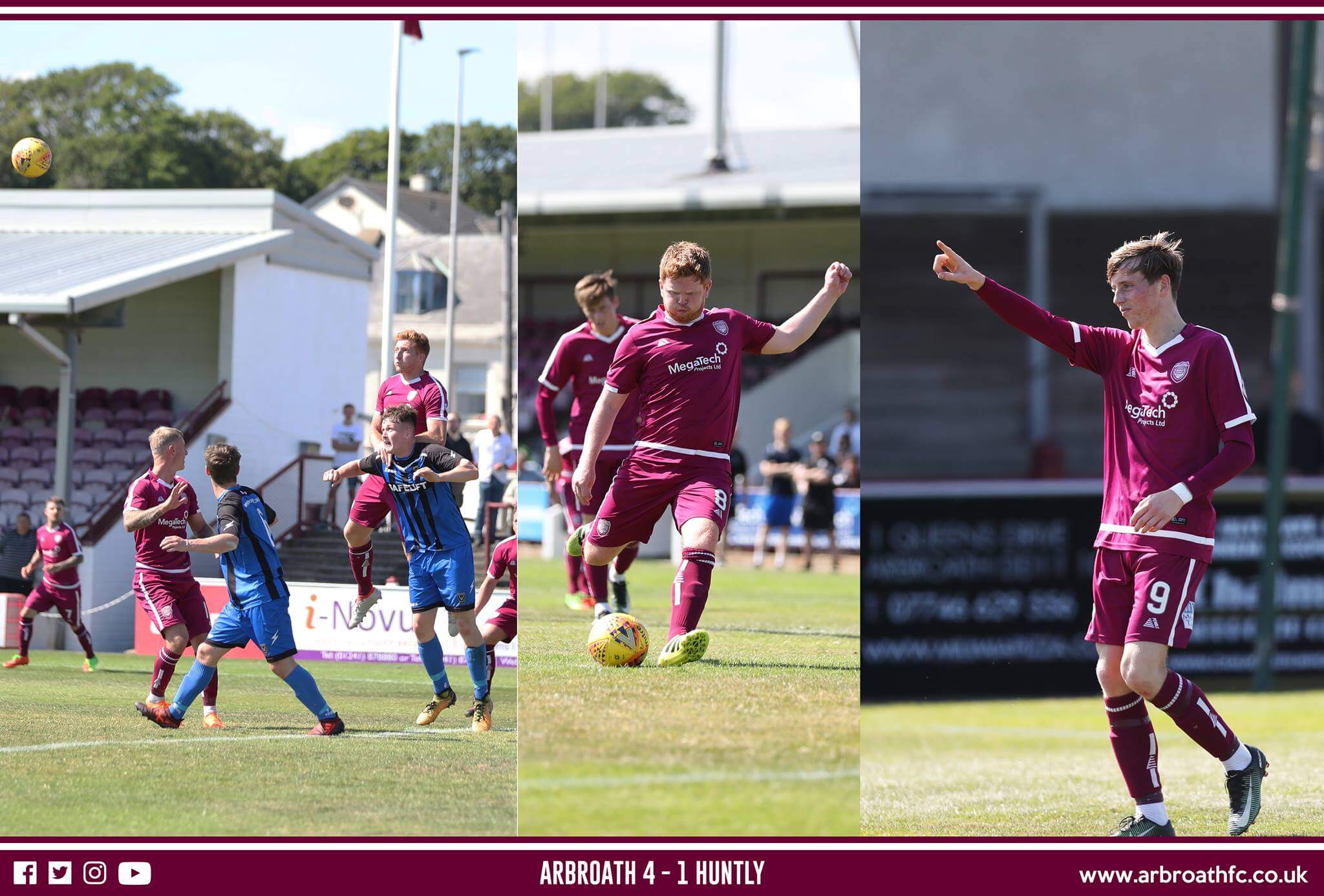 The Lichties got back to winning ways this afternoon at a very hot and sweaty Gayfield.

Highland league Huntly were the visitors as both sides used the match to improve on their match fitness.

It was a Dominant display for the Lichties in the first half with Kane Hester linking up well with trialist Gary Fraser and Bobby Linn and Omar Kader providing great width on either wing.

Kane opened up the scoring in the 10th minute when he smashed home a volley from a tight angle. Kane was again involved as he won a penalty in the 21st minute which was slotted home by Ryan McCord.

A great piece of skill by Fraser made sure he won the ball before passing back to Hester who should have added his 2nd from close range.

Trialist Finn Graham was playing in centre midfield and did well to break up any Huntly attack.

Jason Thomson was getting up the wing as often as he could and scored his debut Arbroath goal when he rose highest to nod in a free kick after a foul on Gary Fraser.

Ricky Little was playing in the middle of a back three with David Gold playing Left back. Gavin Swankie was showing his experience in finding space to start attacks and McCord was again linking up well with Linn who was looking sharp and hungry.

Darren Hill made his second Arbroath debut in goal but didn’t have much to do in the first half.

Assistant Manager Ian Campbell brought on Shaun Leishman for Jason Thomson and Michael McKenna for Gavin Swankie at half time.

McKenna’s athleticism and skills were on display in a beautiful move down the wing where he beat several players only to have his shot blocked.

Kane Hester got his second in the 50th minute when he turned with the ball after a cross from the right to put Arbroath 4-0 up.

Shortly after Ryan Wallace and Lewis Elder replaced Hester and Fraser who both had put in a tireless display up front.

Omar Kader was unlucky on two occasions, first as he picked up a sublime pass from McCord and to find the back off the net only to be ruled offside, then smashing the post as he hit a volley from a tight angle.

Arbroath were putting some nice moves together and Leishman caught the eye with some nice play.

Huntly made a series of changes too with their trialist keeper standing out as he making some very impressive saves. With so many changes the game did open up and Huntly did score a goal through Tom Andrews on the hour mark.

Thomas O’Brien came on on for Ryan McCord but despite lots of possession the Lichties couldn’t find another goal.

Another great run out for the team and full credit to Huntly. Conditions were hot and both sides were full of running and energy.