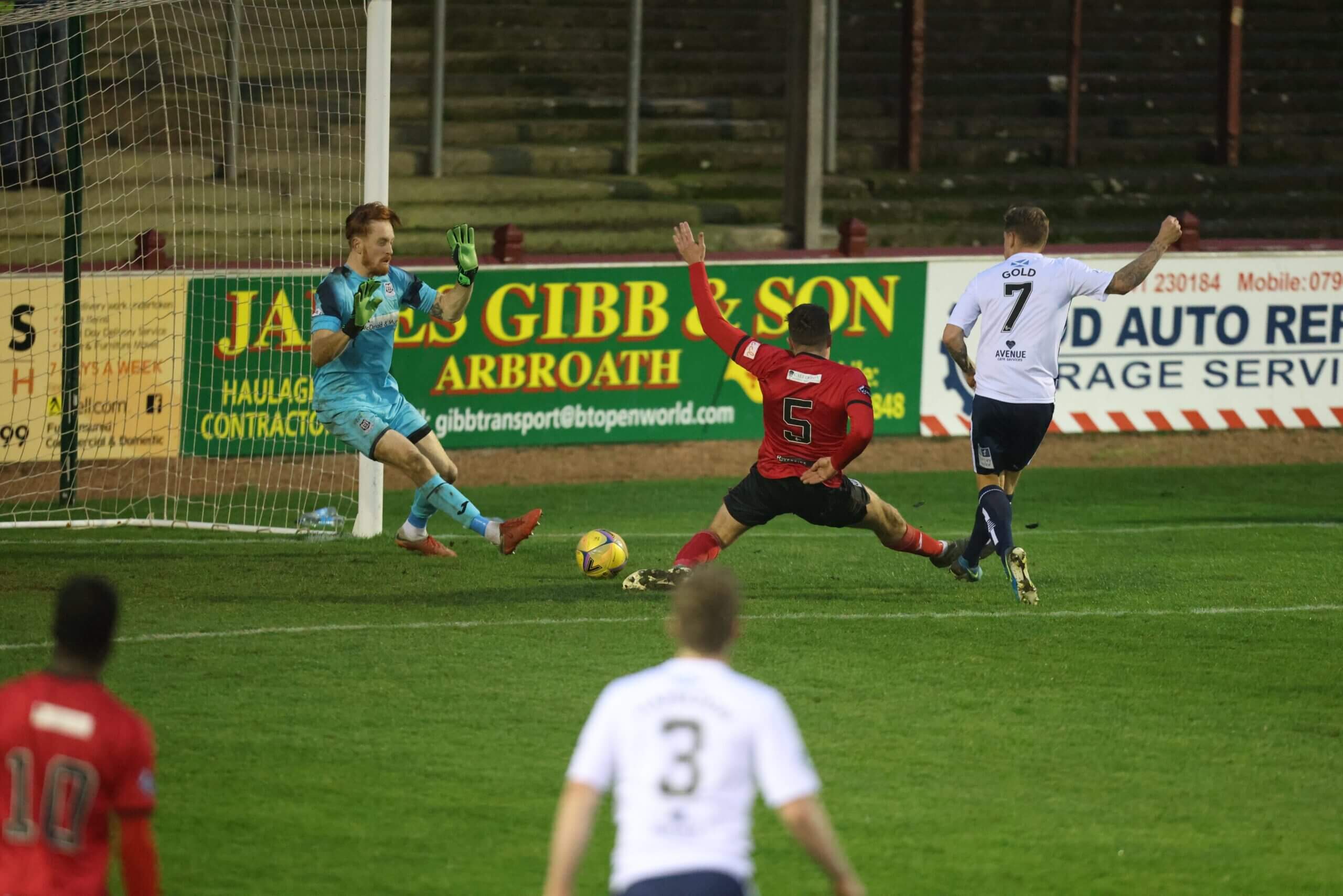 Arbroath made it into the last 16 of a cup competition for the first time in 27 years as the finished the 2nd best 2nd placed team in this season’s Betfred Cup.  A home tie against Dunfermline Athletic on Saturday 28th November is their reward.

Saturday’s match was delayed by 25 minutes as one of the assistant referee’s suffered an injury during the warm up and a replacement had to be called upon last minute.

Arbroath, with the wind at their backs were shooting towards Pleasureland in the first half and it didn’t take them long to start to apply pressure on the Elgin City Goal, with Kris Doolan taking aim after only 6 minutes but just missed the top left hand corner.

A Jason Thomson header at goal was soon followed by a Dale Hilson shot which was brilliantly blocked on the line by David Wilson in the 19th minute as Arbroath sought the first goal.

Another effort from Doolan, this time a header was just over before Michael McKenna was blocked at the front post.

The goal did come and it was started and scored by David Gold in the 30th minute.  Gold picked up the ball 20 yards from goal who found Bobby Linn, after toying with the defender, Linn played the ball to the overlapping Colin Hamilton who cut the ball into the box which missed everyone but Gold was there to slam the ball through a crowded box and into the back of the net.

Arbroath kept the pressure up with Colin Hamilton teeing up Doolan but his shot was saved before a looping Hamilton header was cleared off the line.

David Gold made it 2-0 in the 39th minute as Doolan played a clever flick into the path of Jason Thomson who ran to the line before cutting back to David Gold who was first to the ball and hit a low shot under McHale to double Arbroath’s score.

Bobby Linn was next up with a curling shot just inches wide of the far post as he struck from 20 yards before David Gold missed out on his hat-trick as he pulled a shot wide in the 39th minute.

Arbroath almost scored straight away into the second half as Ricky Little showed great bravery by throwing his head to the ball after a corner but his shot was someone blocked on the line.

Elgin now had the wind and did look much improved but in the final 3rd really struggled to test Gaston in the Arbroath goal.

Arbroath made a series of changes and the fresh legs and pace introduced by Michael Ruth and Scott Stewart combined with Ruth playing the perfect ball through to Stewart who beat the offside trap to make it 3-0 in the 82nd minute.

Stewart should have grabbed his second goal just minutes later as he found himself through on goal but was foiled by the defence who made it back.

David Gold almost grabbed his hat-trick in the 93rd minute but his shot from 14 yards was blocked.