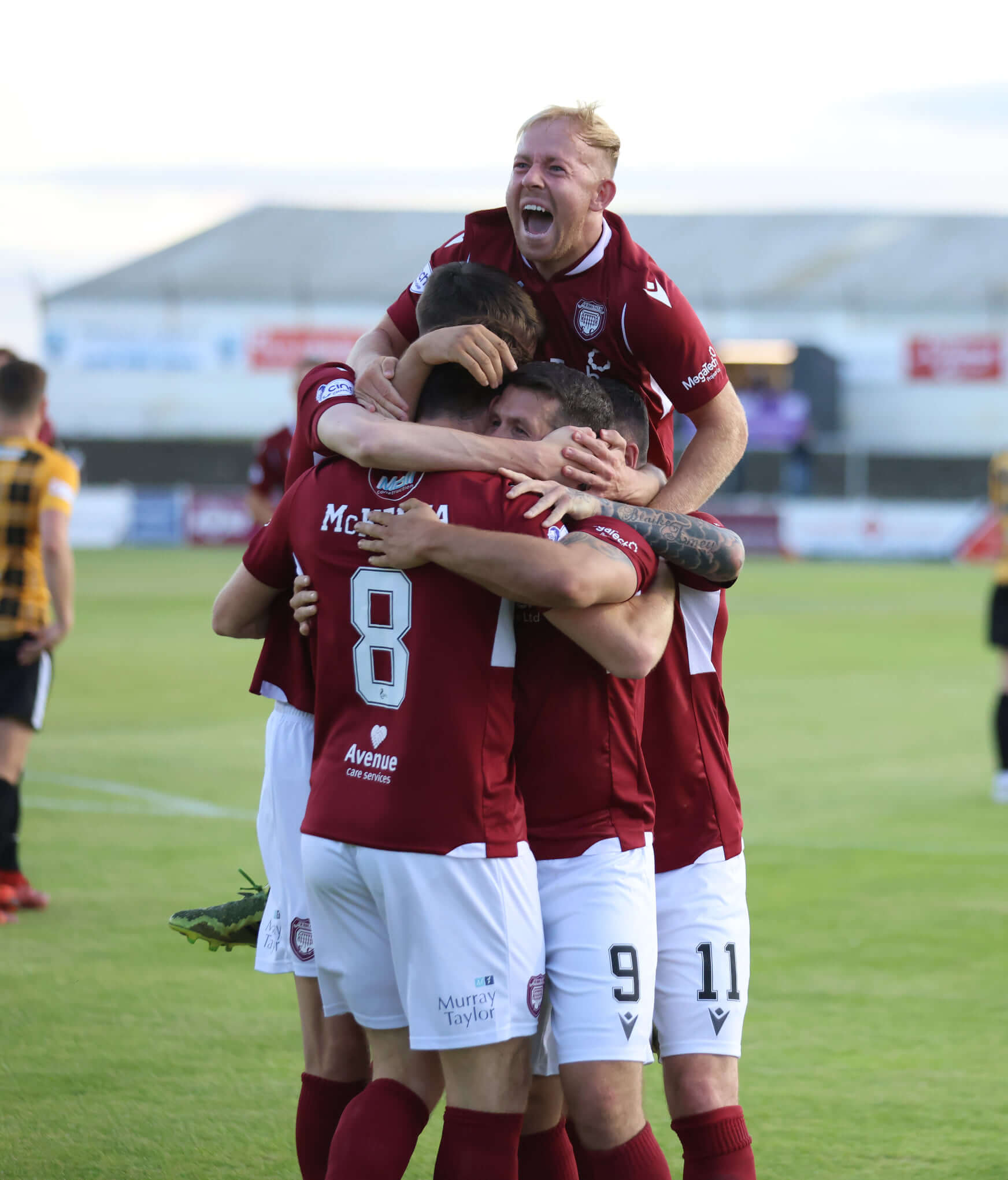 There was a very welcome return for supporters to Gayfield last night and they couldn’t have dreamed of a better evening for it as the terraces sweltered in the hot summer sun as Arbroath welcomed East Fife in their second match of the Premier Sports Cup.

With 600 supporters inside Gayfield it was the first time that Arbroath supporters got to see many players in the flesh for the first time as well as the many improvements to Gayfield including the Supporters Wall and the famous Gayfield pitch which was looking beautiful.

Dick Campbell made 5 changes from Saturday with Joel Nouble making his full debut, Harrison Clark making his starting debut, Liam Henderson returning from suspension and making his first appearance at Gayfield with Thomas O’Brien returning and Gavin Swankie also coming into the team. Lichties were also encouraged to see Jason Thomson jogging round the pitch as he makes his return from his knee injury. The only other absentee was Dylan Paterson.

Arbroath lined up 442 with Antell in goal, David Gold at RB, Colin Hamilton at LB with Little and O’Brien, before Stewart, Clark, Henderson and Low with Swankie playing as a number 10 behind Nouble.

There was a return to Gayfield for Ryan Wallace, and Scott Gallacher but there was no Danny Denholm.

Arbroath attacked the Pleasureland end for the first half and the buzz around the ground was to about new signing Joel Nouble.

The former Aldershot Town forward was involved from the very start and showed an array of lovely touches and speed and was immediately involved in every Arbroath attacking movement.

Nouble had his first shot on goal in the 6th minute but it was just wide of Gallacher’s post.

The early action really didn’t offer up too much in terms of real chances but Liam Henderson was showing some nice touches as he played in midfield with Harrison Clark getting some early touches as he sat just in front of the back four.

Arbroath were dealt a huge blow when Thomas O’Brien was forced off with an injury in the 25th minute. He and an East Fife player both went for the same ball but O’Brien came off worse as he limped round the pitch with Bobby Linn coming on as an early substitute.

Linn moved out to the left wing, with Henderson replacing O’Brien in defence and Low moving into the centre of midfield.

Scott Stewart won a free kick on the right in the 28th minute which also seen Chris Higgins receive a yellow card.

Bobby Linn made an early impact on the left and was soon showing early signs of a great partnership with Nouble.

It was indeed Linn who came close in the 34th minute as his shot from the left just missed the right hand post.

East Fife were lucky not to conceded a penalty when Ross Dunlop pushed Liam Henderson in the box during a corner kick. Henderson was pushed into the path of both fists of Scott Gallacher who had went to push the ball and Henderson needed treatment for the blow to the face.

Nicky Low had a header saved from Gallacher in the 37th minute with Kevin Smith missing a header in front of goal just on the stroke of half time.

Neither team made any changes at the break but David Gold was quick off the mark as he ran in on goal from the right wing in the first minute of the second half forcing Gallacher to make the save.

Colin Hamilton’s header from a Bobby Linn corner in the 55th minute was wide of the post as Arbroath started to dominate possession.

In the 58th minute Arbroath made 4 changes at once, as James Craigen, Dale Hilson, Luke Donnelly and Michael McKenna came on for Scott Stewart, Gavin Swankie, Harrison Clark and Joel Nouble with all players getting a great reception as the changes were made.

Calum Antell had to make his first save on the hour mark as he denied Aaron Dunsmore before 60 seconds later Colin Hamilton unleashed a powerful drive from 20 yards which Scott Gallacher saved at the expense of a corner kick.

The game was to take a major turn in the 68th minute. Calum Antell came rushing out of his box to try and clear the ball but Ryan Wallace went down as the two players collided with Referee Steven Reid awarding East Fife a free kick with Antell being shown a straight red card.

With all 5 changes made, David Gold showed great character and spirit to take the gloves and go in goal for Arbroath. We all love how versatile and skilful Goldie is, but this really was a new chapter in his Arbroath career!

Derek Gaston showed quick thinking as ran round the pitch to offer Goldie some advice on how to deal with the free kick.

The resulting Ryan Wallace flew high over the goal and towards the roof of the Switches.

With Gaston now standing behind the Arbroath goal to talk Goldie through the rest of the game, Referee Reid wasn’t happy and directed Gaston to leave the area, but Gaston got a huge cheer as he just climbed over the wall and instead just stood on the terracing.

The Arbroath crowd started to roar to get behind their team and just a minute later they were celebrating a goal on the terraces for the first time since Dale Hilson scored against Queen of the South on 15th February 2020.

The architect was Michael McKenna who showed great determination to win the ball on the right, before keeping the ball in play before placing the ball across the goal where it was bundled over the line by Dale Hilson!

Gayfield hadn’t roared in 16 months and it felt good!

The pressure was now on to keep a clean sheet and Wallace had a shot blocked in the 75th minute before picking up a yellow card for kicking the ball away in the 81st minute.

Liam Watt and Stewart Murdoch shot and header over in the 83rd minute and 85th minute as David Gold was untested as he commanded his goal.

Arbroath hit East Fife on a quick counter in the 89th minute with Hilson keeping the ball in play before finding Linn who battled past his defender to get to the byline, as he looked up Luke Donnelly had ran from the half way line and as Linn’s inch perfect cross came in Donnelly hit a lovely header past Gallacher to make it 2 goals in 2 games to send the home fans wild. 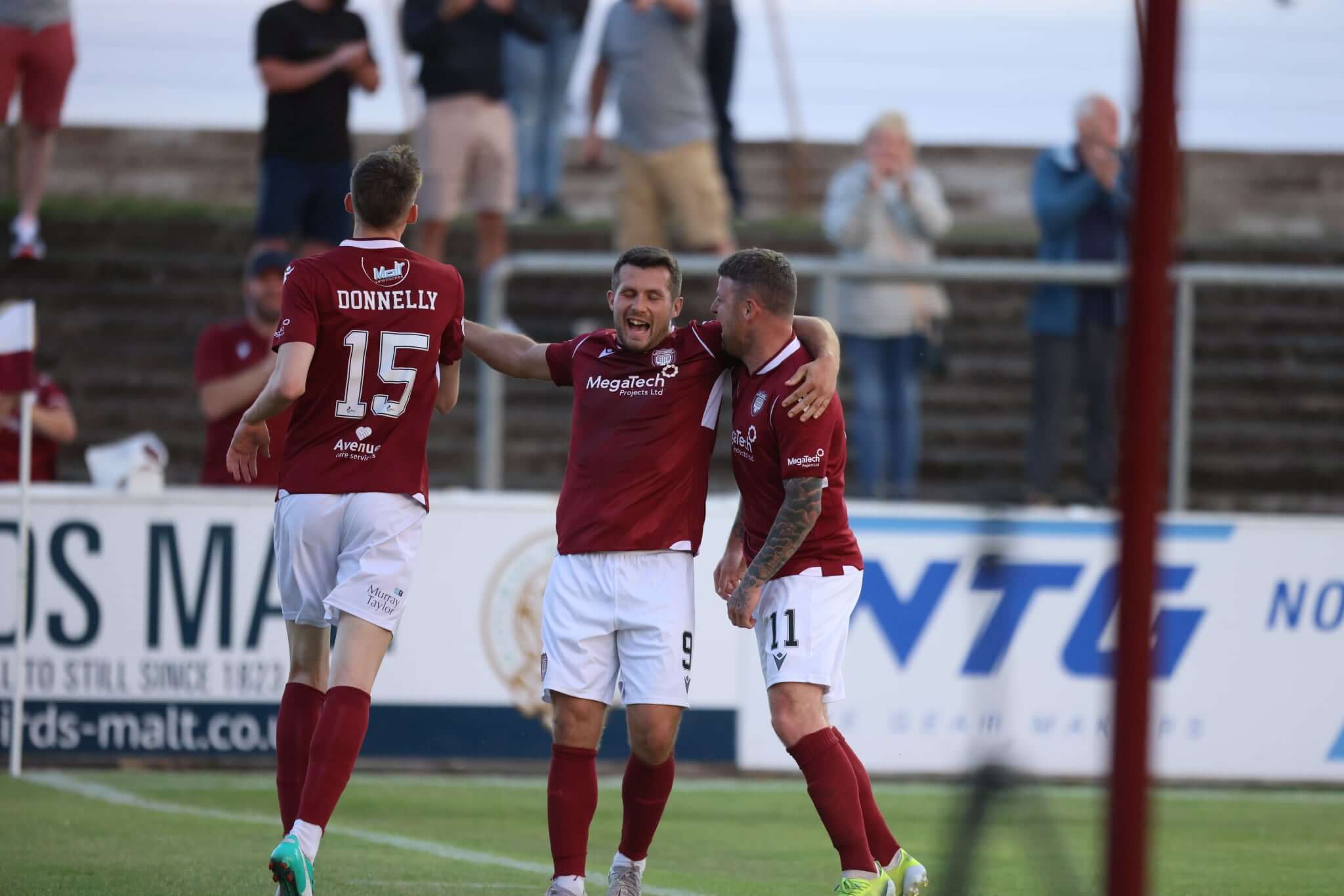 East Fife had another free kick deep into injury time but again it was high over the bar and David Gold kept a clean sheet.

With the last kick of the ball Linn almost made it three with a great strike which was blocked for a corner kick. 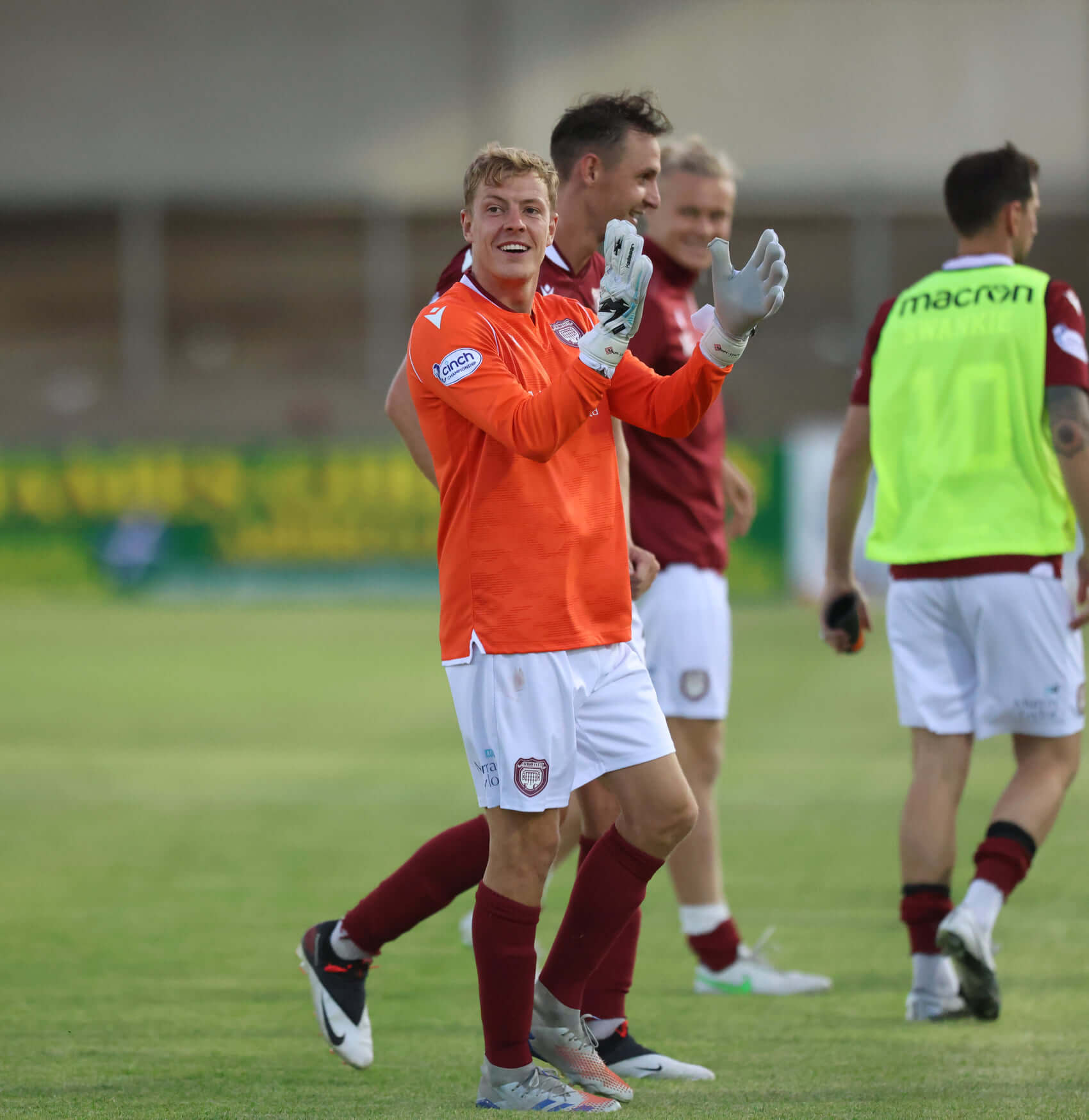 A fantastic game of football for the return of our supporters and our 2nd win in 4 days who finally got to see their heroes in action after such a long, long absence.

Some great performances and once again a tremendous team spirit which was key in our win.

It is hoped that Thomas O’Brien hasn’t  sustained a serious injury and it will be a blow to be with out Calum Antell who has made a good impression to his Arbroath Career with almost 2 clean sheets.

Saturday’s trip to Tannadice will be a really tough test, but we look forward to it.