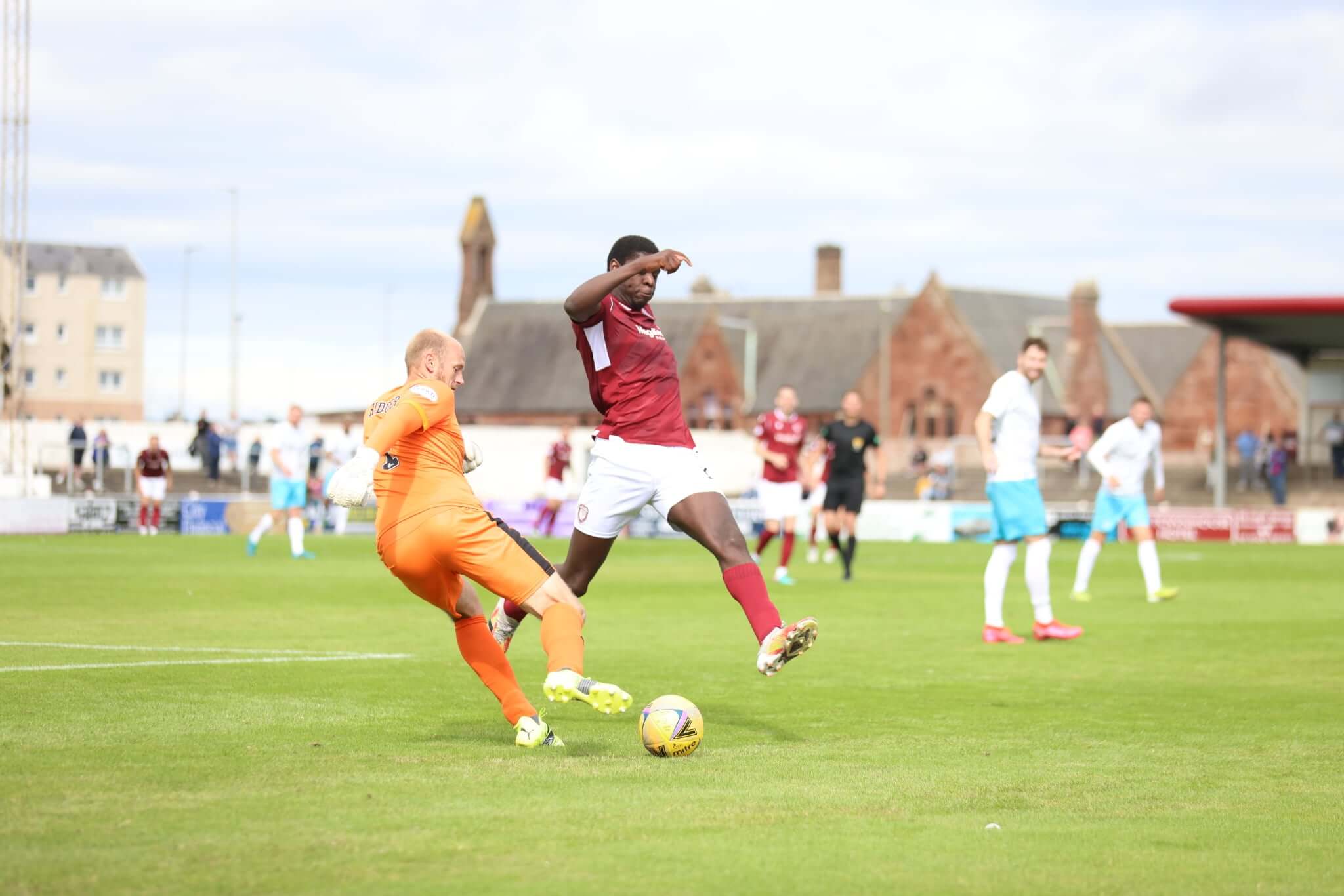 It was a tough day at the office for Arbroath this afternoon as they lost out to a goal by Shane Sutherland in the 66th minute, despite dominating the second half.

Arbroath were without a trio of players as Liam Henderson missed out due to serving a one match suspension picked up at Edinburgh City whilst David Gold and Jason Thomson were also absent.

There however was a return for Captain Thomas O’Brien who took his place in the heart of defence with Ricky Little, with Colin Hamilton at left back and Scott Stewart deputising at right back in front of goalkeeper Derek Gaston.

From right to left in midfield there was Michael McKenna, Nicky Low, Harrison Clark and Bobby Linn with Joel Nouble coming in to partner Luke Donnelly up front as Arbroath went for a sold 4-4-2 formation.

James Craigen returned to the team and was on the bench alongside Dale Hilson, Gavin Swankie, Dylan Paterson, Chris Hamilton and Calum Antell.

Arbroath attacked the Harbour End in the first half with the sun beaming down on Gayfield which had 1000 supporters inside for the first time since early 2020.

The opening exchanges were quite raw and caget, with Thomas O’Brien conceding a foul on Manny Duku in the 2nd minute but at the other end Joel Nouble was impressing and fired over the Inverness bar after just 6 minutes.

Inverness Caledonian Thistle were trying to get the ball to Tom Walsh on the left wing but the Arbroath defence were doing well to take care of any crosses that did come in.

Shane Sutherland had a shot blocked in the 15th minute with neither side making a goalkeeper make a save in first quarter of an hour.

Joel Nouble was finding joy with his strength and pace and in the 26th minute fended off a defender on the half way line before bursting forward and into the box but his shot was just wide of the far post as Luke Donnelly and Bobby Linn were set to pounce.

Scott Allardrice fired over 2 minutes later after an Inverness corner kick then former Raith Rovers striker Manny Duku had a shot saved by Derek Gaston on the half hour mark.

Colin Hamilton was booked in the 33rd minute despite it looking like he won the ball in a challenge on Scott Allardice.

The best chance of the first half fell to Shane Sutherland whose shot was cleared off the line by Scott Stewart after some silky skills from Duku seen him beat two Arbroath defenders near the byline.

Neither side made any changes as Inverness kicked off the second half.

It was Arbroath who were looking lively with Nouble involved in everything early on, with Colin Hamilton winning a free kick in the 49th minute. As Nicky Low and Bobby Linn stood over it, it was Linn who surprised Ridgers but his shot was just over the bar.

Kirk Broadfoot was shown a yellow card in the 52nd minute for a foul on Nouble, which gave Arbroath another chance of a free kick. This time Nicky Low took the free kick and his shot was narrowly wide of the top corner.

Arbroath’s best chance came in the 62nd minute. A foul won by Michael McKenna after he was taken out by Danny Devine was almost headed into the net by McKenna as he connected to Low’s free kick but Ridgers made the save.

In truth Inverness hadn’t been in the second half and they were given a great chance when a header clear by Harrison Clark which was pounced on by Shane Sutherland who ran through on goal and showed great skill as he dinked the ball over the top of the out rushing Derek Gaston to capitalise and send the traveling support wild.

It was a real blow for the Lichties who were in full control of the second half, but just one of those fine margins that the Scottish Championship will punish you for.

Arbroath kept up the pressure with Luke Donnelly and Joel Nouble combining but the breaks just weren’t happening at the final moment for the Lichties.

Inverness replaced Tom Walsh with defender Cameron Harper as they tried to retain the lead in the 74th minute and just a minute later Arbroath had a great chance as a Colin Hamilton long throw fell to Scott Stewart in the box but his first time shot was over the bar.

James Craigen replaced Harrison Clark in the 78th minute, with Billy McKay coming on for Roddy MacGregor seconds later as both sides made their second substitution.

Billy McKay was only on the pitch for seconds before picking up a yellow card for a foul on McKenna with Broadfoot fortunate not to be shown a second yellow after another foul on Nouble.

Gavin Swankie came on for Scott Stewart with 7 minutes left to go as Arbroath pushed for a goal.

James Craigen had a shot from outside the box blocked in the final minute before Inverness made their last change with Lewis Hyde coming on for Duku.

In the final seconds of play Gavin Swankie was booked for a foul on Scott Allardice.

A tough defeat on the opening day. Arbroath certainly weren’t outplayed and it was just that one half chance which was gifted to Inverness that they grabbed. It was a good team performance and as Joel Nouble starts to find his stride in our team, it looks like we have a real attacking threat in our side. He never gave up, chased down everything and was unlucky not to score.

Lots of positives and plenty to take into next Saturday.