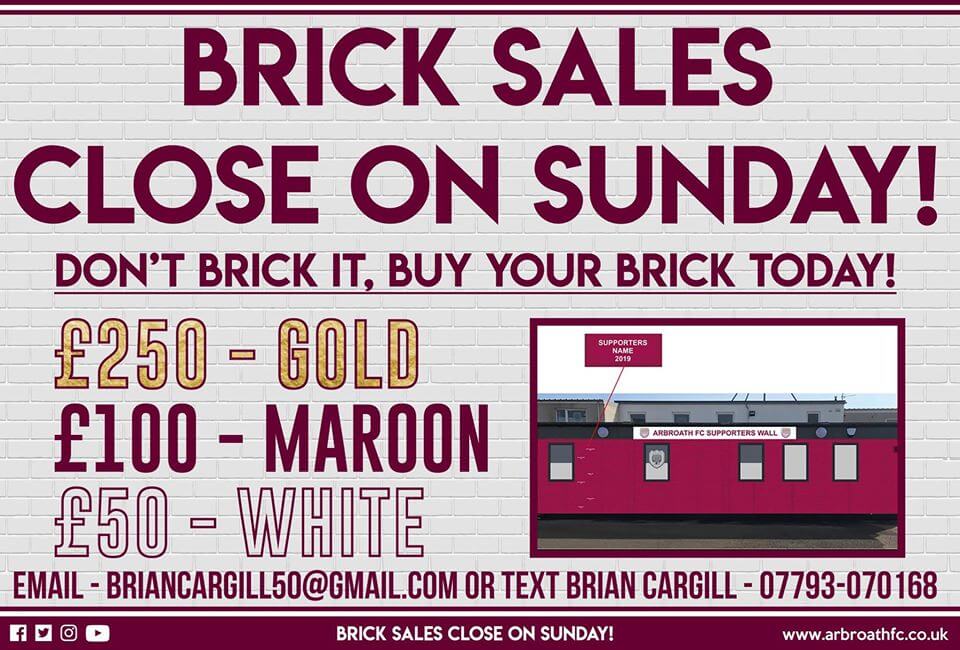 ONLY 5 DAYS LEFT TO BUY A BRICK

We are into the final few days of our brick sales!

Having originally planned to stop at the 500th brick, we listened to you our very generous and loyal supporters and we kept the sales open and have soared way past 500 bricks as we now sit at 714 Bricks Sold and an incredible £72,150!

Who has the best fans? WE DO!

The money raised is crucial to help the club survive the current pandemic effecting Scottish Football.

We are all eager to get back playing and remember we have Derek Gaston, Jason Thomson, Colin Hamilton, Ricky Little, Thomas O’Brien, Mark Whatley, David Gold, Michael McKenna, Dale Hilson, Gavin Swankie, Bobby Linn, Luke Donnelly and Scott Stewart under contract and all signed up for the start of the new season.

It is unlikely the Supporters Wall will be re-opened anytime soon, so if you are in any doubt, please buy your brick and don’t regret missing out!

If you would like to buy a brick before Sunday then remember there are three types of brick available for purchase and these area as follows:

For more information or to purchase a brick; Email Brian with the subject “Bricks” at; briancargill50@gmail.com or text on 07793-070168