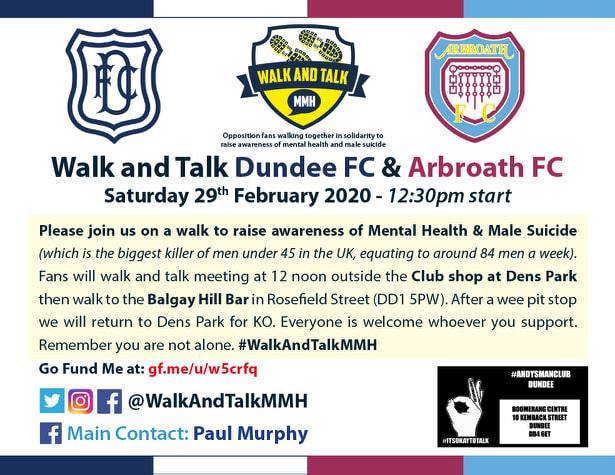 A Walk and Talk has been set up by Richard Peter-Tennant and Paul Murphy to raise awareness of Men’s Mental Health and Suicide Prevention on the 29th February when Dundee play Arbroath.

Arbroath Fans are invited to join them on the walk which sets off from the club shop at Dens as they make their way to the Balgay Pub and after a wee pit stop walk back to Dens before the game starts.

Paul Murphy the Balgay Pub owner will be giving the walkers free soup and Stovies!

They did their first walk which we feel was the first one of its kind in a Football Setting in Scotland in November 2019 when Dundee played Dundee United. It was a brilliant success and experience for all.

Men, Women (One Woman was heavily Pregnant at the time), Children and dogs took part in the walk as did representatives from Dundee FC Community Trust and Andy Man’s Club Dundee.

They raised a lot of awareness through the media and even had an Early Day Motion in Parliament.

They raised £2000 for Charities including Calm Zone, Andy Man’s Club Dundee, Dundee FC Community Trust and Dundee Samaritan with fans fans from all over Scotland and a few from England.

You don’t need to be a Football fan or even a fan of either team to join them. It’s all about raising awareness