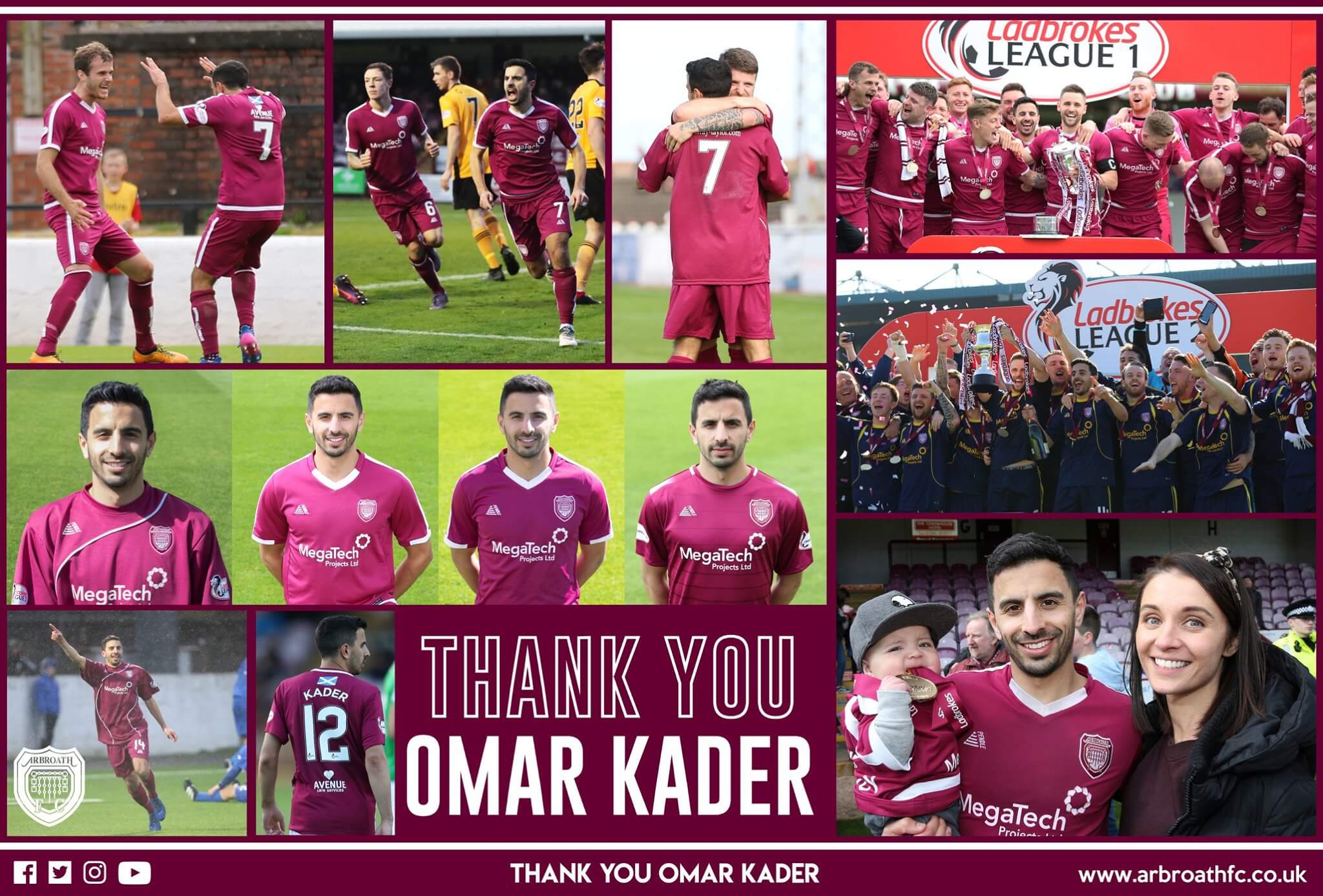 Arbroath FC are sad to announce that our winger Omar Kader has decided to call it a day and hang up his boots.

After consulting with Dick and Ian, Omar has decided to retire on a high after helping the Lichties secure 5th in the Championship.

Omar started his career at Spartans before moving to Forfar in Athletic in 2012 after a successful trial. In a 3 year spell he made 91 appearances scoring 10 goals before a short spell at Alloa Athletic before returning to Forfar where he made another 14 appearances in the 2015-2016 season scoring another 2 goals.

Omar was in a group of players that were first signed by Manager Dick Campbell in May 2016 as he set about rebuilding the Arbroath team. Omar moved from Angus rivals Forfar Athletic alongside Gavin Malin and Michael Dunlop joining Steven Doris, Ryan McCord, Colin Hamilton, Ricky Gomes, Martin Scott, Bryan Hodge, Josh Skelly, Bryan Prunty and Eddie Ferns as the new Arbroath side took shape.

In his first full season with Arbroath Omar played a crucial role throughout the season which resulted in Arbroath securing our League Two Title on the final day of the season in Stirling.
Omar scored 6 goals – Inverness Caledonian Thistle U20s, Stirling Albion x 2, Edinburgh City x 2 and Montrose.

In our first season in League One we pushed all the way and made it into the Championship play-offs and again Omar played a huge part scoring 5 goals against Airdrieonians, Ayr United, Albion Rovers x 2 and Stranraer.

Our second season in League One and another League Title as we led the league from Day 1. Omar joined an elite club as he picked up his 2nd League Winners medal with the Club, which only a few players in the club’s history have achieved. Omar scored a solitary goal against Stenhousemuir.

Our debut season in the Championship and Omar scored our first competitive goal of the season against Elgin City before scoring our 3rd goal in our rout against Inverness Caledonian Thistle at Gayfield.

Omar proved his worth on many occasions to Arbroath, and once again this season in the Championship he proved a pivotal role across the pitch, attacking down the wing but also helping track back and make crucial tackles and block to assist his teammates.
Betfred Cup – 2 Starts and 2 substitute appearances and 1 goal.

Omar is also a proud graduate of Heriot Watt University and has also played for Wattcell Fusal Club in Edinburgh.

In total Omar has pulled on an Arbroath shirt competitively 143 times (80 Starts, 63 subs) and scored 14 goals and lifted both the League Two and League One trophies and helped the club claim 5th in the Scottish Championship.

Omar always gave 100% for Arbroath, whilst attacking down the wing providing goals and assists, but also always helped his defenders with crucial tackles and blocks doing some of the less glamorous play in his own half.

Arbroath Manager Dick Campbell was full of praise for Omar;

“I’ve managed Omar now for 8 years. I had him for 4 years at Forfar and now 4 with Arbroath and he is one of the best professionals I’ve ever worked with in my career. To have a player with you for 8 seasons tells you all you need to know. I wish him and his family all the very best and thank him for the time he has been my player.”

“Everyone at Arbroath FC is sad to see Omar retire but he leaves with our very best wishes, as Dick said he is a true professional but is also a gentleman who conducts himself in the correct manner of a footballer.
He has played a huge part with his performances in one of our most exciting periods in the clubs history and leaves with 2 league winning medals and a season in the Championship, Omar and his family will always be welcome to pop in and see us at Gayfield anytime.”

Away from football Omar is married to Tori (Victoria) and they have their beautiful son Jesse, who they are both looking forward to spending more time with.

Many Arbroath supporters will also know Omar’s parents who have followed Omar all over Scotland supporting him and Arbroath.

We do think of ourselves as a family club, and Omar is definitely part of our family. He has given us 4 years in which has been our most successful spell in recent history and Omar has played his part all over the pitch.

He will be missed by everyone at the club, and especially his team mates and the Management side who have forged lasting friendships.

Omar and his family will be welcome back anytime!