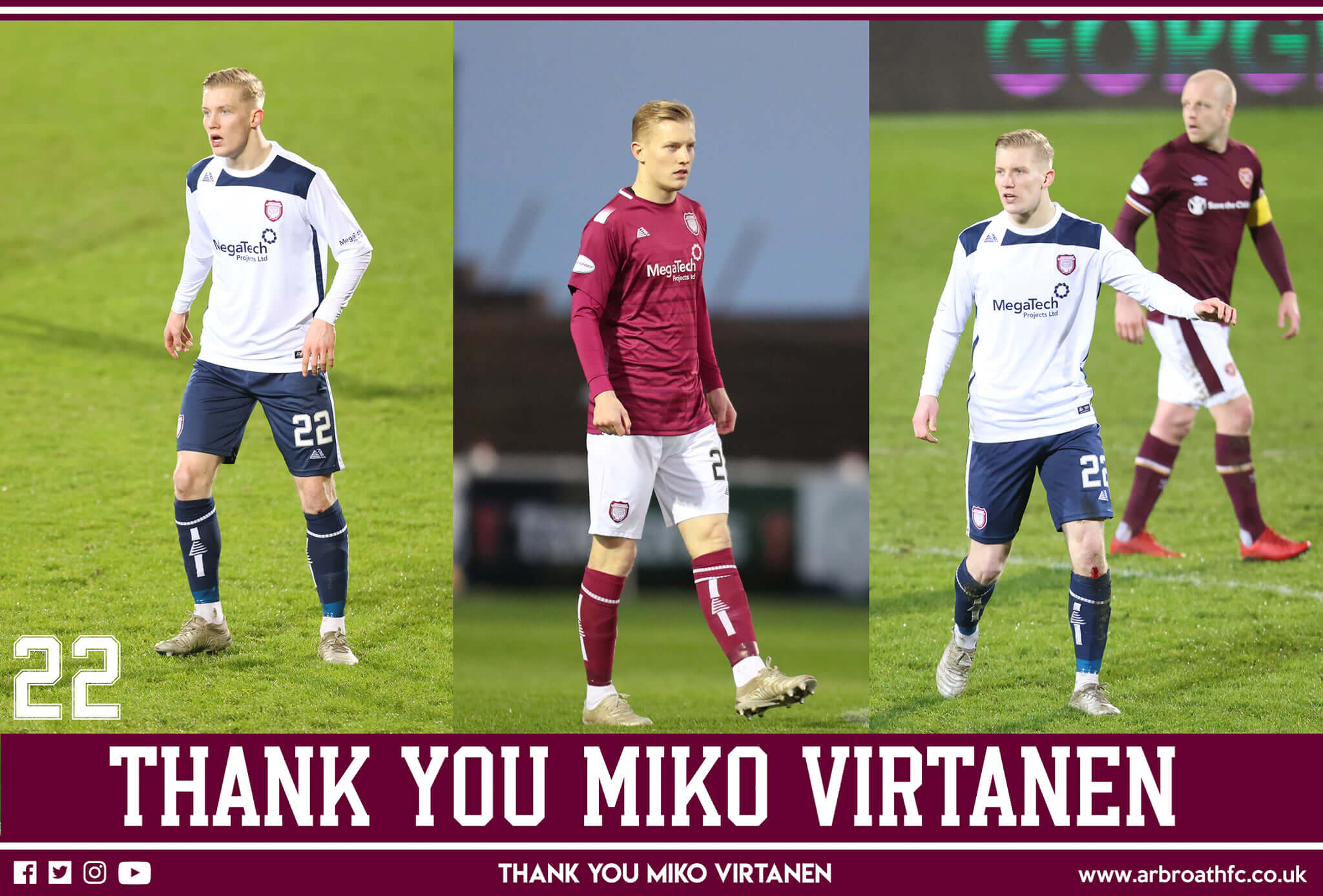 Arbroath FC can confirm that Miko Virtanen has been recalled by parent club Aberdeen and has now made the move back to Pittodrie.

As Miko enters the final few months of his contract with Aberdeen he has been recalled to show what he can do with the first team for the remainder of the 2020-2021 season.

Whilst we are very sad to lose Miko, we are all hoping he gets his opportunity to show his skills in the Premiership and delighted he has been given that chance.

Last season we had the privilege of taking Miko Virtanen on loan from Aberdeen and it was an incredible season for Arbroath and Miko played a huge part in that. We thought that was the last time we would see Miko in an Arbroath shirt, but we were delighted to fight off several clubs this season who were desperate to take Miko on loan. It has been an honour of having Miko back at Gayfield for the past few months.

Miko made his Arbroath debut against Dundee United at Tannadice coming on in the 63rd minute before making his first start for the club against Dundee at Den’s Park on the 5th September.

Needless to say it didn’t take long for the Arbroath faithful to instantly take Miko in as his endless running and love of a tackle combined with his grit and determination seen him become a fan favourite.

Only an international match for the Finnish U21 side kept Miko from having a constant run in the team as he made 18 starts in the league, with a further 2 from the bench and 3 starts in the William Hill Scottish Cup.

His performances seen him voted Young Player of the Year in our end of season awards and it was thoroughly deserved.

Miko’s return to Gayfield this season has seen him add another 3 starts in the Betfred Cup and another 8 starts in the Championship with a further appearance from the bench.

Not only have we been blessed with Miko on the pitch, but everyone at the club was thrilled to have Miko back because he is a very humble young man and gentleman off the park. We said it last season but it has been an absolute pleasure to get to know Miko, watch him develop as a footballer and his passion to play for the club in every game was appreciated by all the staff and supporters of the club.

We will watch on and hopefully it won’t be long before we see the Arbroath #22 run out in his Aberdeen #26 shirt in the Premiership.

Miko will always be welcome back at our club and wish him the very best.

Thanks for the memories Miko!