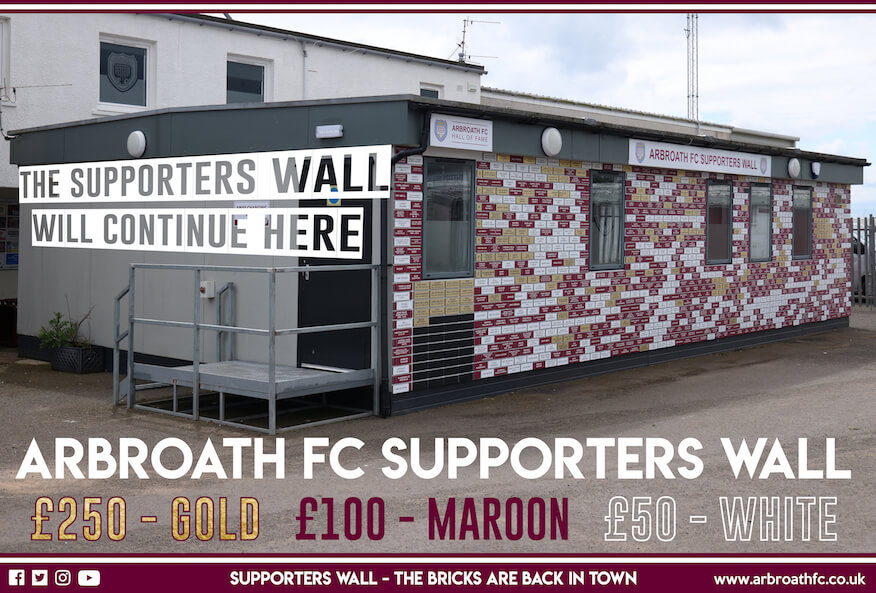 As a Football Club, with do our very best to listen to all our supporters. The support we have received over the past few seasons has been nothing short of phenomenal.

Our Supporters Wall was launched as a fundraiser during the early stages of the Pandemic when it was soon realised that our season was halted prematurely with a doubt looming the long term of playing football.

Thankfully we were lucky and able to compete in a revised 27 game Championship season, where we secured our place for the third consecutive season in the Championship where we hope to be able to welcome you back home.

The Wall really took off with our supporters and having originally planned to try and sell 100 bricks, it seemed every time that we were stopping sales there was a huge increase and eventually we sold 1094 bricks covering the entire wall of the Champions Lounge with every brick having a story and it’s a wall of memories that we are all proud of.

Having moved downspouts and pipes we tried to squeeze everyone in but we were left with a small waiting list for the next time we added to our Supporters Wall.

Since restrictions eased up in Angus and with the Club Shop opening up to allow Lichties to come down and buy our new Macron Kit there has been a flood of positive feedback for our community project.

It is often hard to really gauge a concept until you see it in the flesh, and as the sales of our new Macron kit soar there has been so many fans getting the first chance to see their name.

Perhaps credit down to all the hard work and planning the wall took and to the all the names of babies, grannies, the young and old, memories of lost loved ones and Lichties from all over the world we have been flooded with requests with Arbroath FC supporters wanting to know when they can next buy a brick.

We therefore have decided to again listen to our supporters and we are bringing forward the next stage of the wall.

The new section of the Supporters Wall with be on the Harbour end of the Champions Lounge on the same side as the back door and ramp.

The Bricks are the same colour options and prices as they were previously.

If you missed out originally and now want to be a part of our Supporters Wall please get in touch with Brian Cargill.

Please let Brian know what colour of brick you desire and what text you would like engraved on your brick.

As soon as we have sufficient orders we will start the manufacture of the next chapter in the Great Wall of Gayfield.