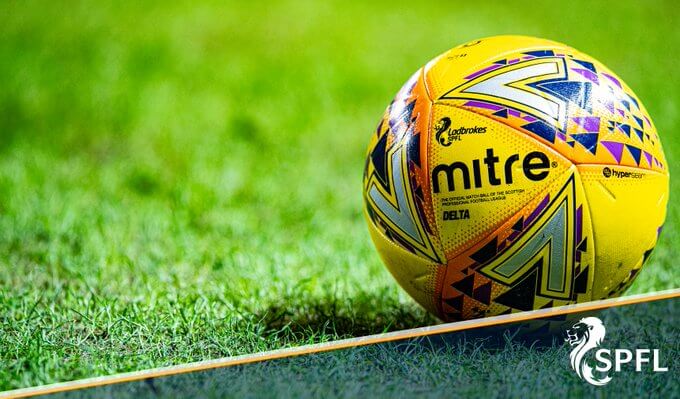 The SPFL Tonight has issued a statement stating that a resolution has been approved by clubs in all 4 Leagues.

It had been one of our very best with some outstanding performances, results and more amazing memories along the way.

We were all hoping that with our remaining fixtures would have been able to have been played out as we still had many exciting games ahead, but nobody could have predicted the coronavirus pandemic and the tragedy it has unleashed around the world.

Despite not being able to finish the season, today’s vote and outcome means that Arbroath FC will finish 5th in the Ladbrokes Championship.

The final season placings are determined by the number of points per game earned by each club in the matches they have played and although we would have all preferred to have played these games, the final standing reflects on the outstanding performances that the Arbroath team had put in this season.

(To read more about this please visit; https://spfl.co.uk/news/spfl-clubs-to-vote-on-curtailment-of-ladbrokes-s )

The Arbroath FC Board confirms that they unanimously agreed to vote in favour of the SPFL resolution, which was  to end the current season.

The preference would have been to complete our season, but with the restrictions imposed by the UK Government during the COVID-19 pandemic it is now apparent that will not be possible.

The overwhelming factor right now is the healthy and safety of everyone.  From our players to our supporters as well as our community and society as a whole. We also have to do what is best for Scottish football.

For everyone in the Scottish Game, it is vitally important that we unite as one  and as a club, Arbroath FC will continue to remain calm and humble whilst showing our fellow clubs the respect that they deserve.

We know that Football clubs are very much at the heart of our communities and as a club we are lucky to be involved with so many people of all ages. We pride our community and we know that if we ALL continue to show compassion and respect during these difficult times we will come out of it stronger on the other side.

We would like to thank our supporters for their continued support of the club. From buying shares, bricks and to the virtual grand national you are all playing your part in helping your club.

Please keep safe and stay indoors so we can help our amazing NHS Staff, Emergency and Key Workers.

“SPFL RESOLUTION APPROVED BY CLUBS IN ALL FOUR DIVISIONS

THE SPFL HAS ANNOUNCED THAT THE DIRECTORS’ WRITTEN RESOLUTION ENDING SEASON 2019/20 IN THE LADBROKES CHAMPIONSHIP, LADBROKES LEAGUE 1 AND LADBROKES LEAGUE 2, HAS BEEN PASSED WITH AGREEMENT BY 81% OF ALL MEMBERS.

The SPFL has announced that the directors’ written resolution ending Season 2019/20 in the Ladbrokes Championship, Ladbrokes League 1 and Ladbrokes League 2, has been passed with agreement by 81% of all members.

SPFL chairman Murdoch MacLennan said: “Firstly, I want to pass on my warmest congratulations to all three clubs on their successful campaigns. This was a highly unusual end to the season, to say the least, and not the one any of us would have preferred, but all three deserve enormous credit for their performances over the course of the season.

“With the turmoil and uncertainty caused by the Covid-19 outbreak, there was always going to be a highly-charged and passionate debate about how we secure the future of Scottish football.

“It is no exaggeration to say that this was an existential matter for Scottish clubs, with many of them telling us they were at real risk of going under unless the situation was resolved very quickly, so I’m pleased that the game has moved decisively.

“Whilst more than 80% of clubs agreed with the directors’ written resolution, it’s clear that others were strongly opposed. There has been talk of voiding the season, making emergency loans and so on, but what has been agreed today is not just the best way forward, it was the only realistic way forward and I now call on all 42 clubs to move forward in a constructive and positive way.”

SPFL chief executive Neil Doncaster said: “Prior to this positive result, we were unable to make the vital end-of-season payments, which will provide a lifeline to so many clubs in the lower divisions. From our detailed discussions with clubs, many were facing an enormous cash-flow crisis. We have moved as quickly as possible to try to resolve this unprecedented situation.

“We’ve achieved the 75% agreement threshold in the Ladbrokes Premiership, Championship and Leagues 1 & 2 and will now be working as quickly as we can to get the end-of-season payments to members in the three lower divisions by the end of this week.”

The SPFL board has also committed to consult on possible league restructuring in time for season 2020/21 around an expanded Premiership model and has appointed Hearts chair Ann Budge and Hamilton Academical chair Les Gray to jointly lead a reconstruction task force, bringing in other football figures to provide input and support. The SPFL executive will provide all possible services and support to make the work of the task force a success.

The resolution also gives authority to the board to make a decision on the remainder of the Ladbrokes Premiership season and the board is committed to consulting with Premiership clubs before any such decision is made.”