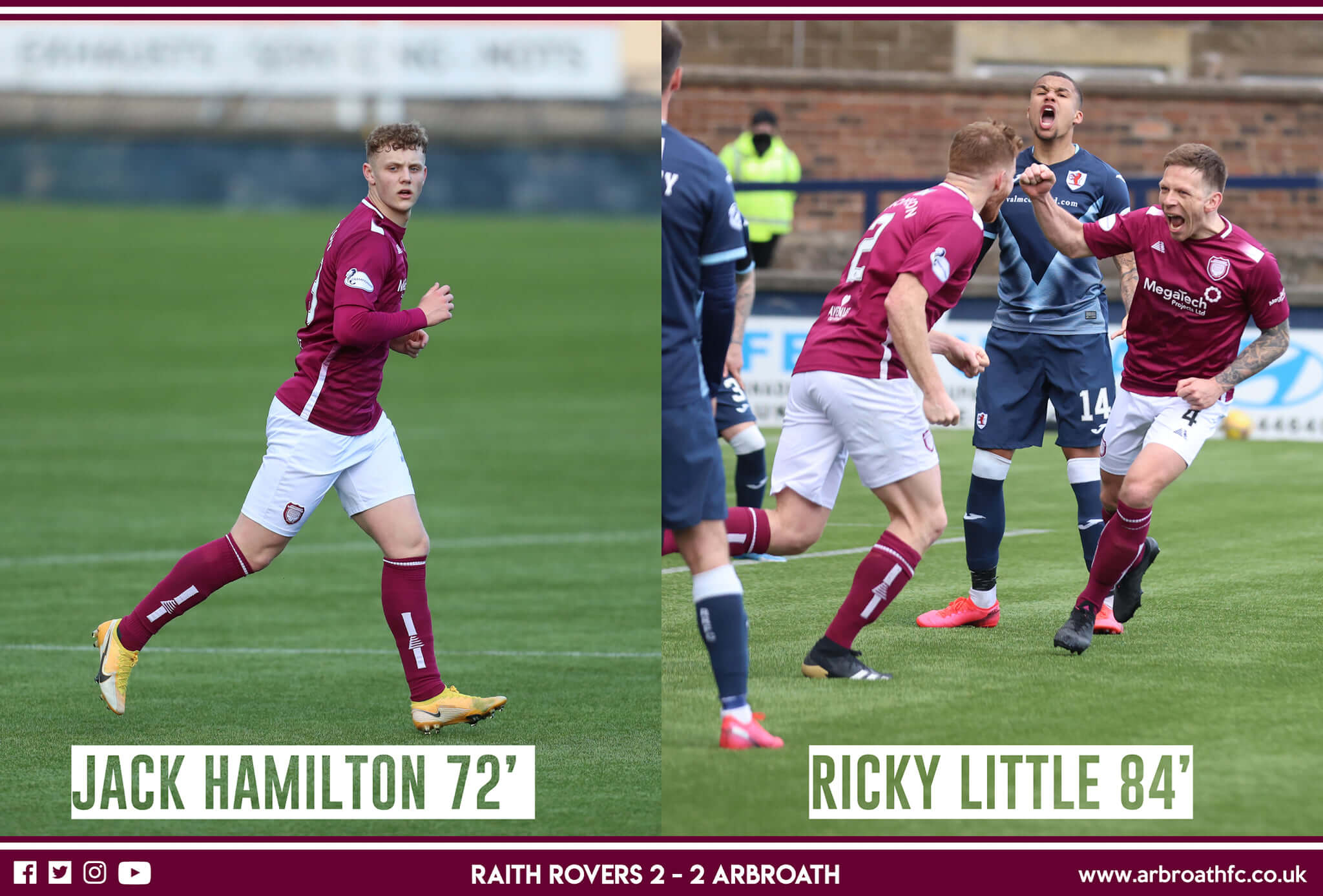 Arbroath showed great character this afternoon to come back from being 2 goals down to secure what could be a vital point at the end of the season.

There wasn’t much goalmouth action, but Raith Rovers took the lead in the 29th minute when Daniel Armstrong scored after an Arbroath attack was intercepted and Raith moved the ball quickly up the pitch. Derek Gaston made a fantastic save but Armstrong was there to net the loose ball.

Arbroath weren’t getting many of the decisions and both Colin Hamilton and Ricky Little were shown yellow cards.

Derek Gaston saved a Lewis Vaughan shot in the 34th minute with Raith Rovers having most of the ball in the first half.

Nicky Low was booked in the 50th minute for a foul on the edge of the box but Armstrong’s free kick was just wide of Gaston’s post.

Arbroath started to get more of the ball and were enjoying more possession in the final 3rd with Colin Hamilton coming close with our first free kick just before the hour mark.

Dale Hilson came on for Kris Doolan in the 66th minute but Raith doubled their lead just 4 minutes later with Armstrong’s shot from the right side of the box found the back of the net.

However the goal pushed Arbroath forward and a deep cross to the back post was headed back towards goal by Lewis Moore and Jack Hamilton made no mistake firing the ball into the top right hand corner from 14 yards in the 72nd minute.

Michael McKenna and Scott Stewart came on 2 minutes later for Lewis Moore and Nicky Low as Arbroath pushed for the equaliser.

With just 6 minutes left, a long throw in by Thomas O’Brien created problems in the Raith box and the ball was cleared back out to O’Brien on the wing and his pass found Ricky Little who struck the ball first time through the legs of MacDonald and into the back of the net to draw level.

With just seconds left a ball into the box by Colin Hamilton almost found the back of the net as David Gold, Jack Hamilton and Jason Thomson all tried to get a touch but Jamie MacDonald managed to somehow tip it away for a corner kick.

The full whistle finally blew and with news that both Morton and Ayr United also just drew the positions at the bottom of the table remain the same.

With Raith Rovers and Dundee dropping points this afternoon Heart of Midlothian were also crowned Champions of the Championship.

We now have 3 huge remaining with both Ayr United and Greenock Morton set to visit Gayfield everything is there to play for.