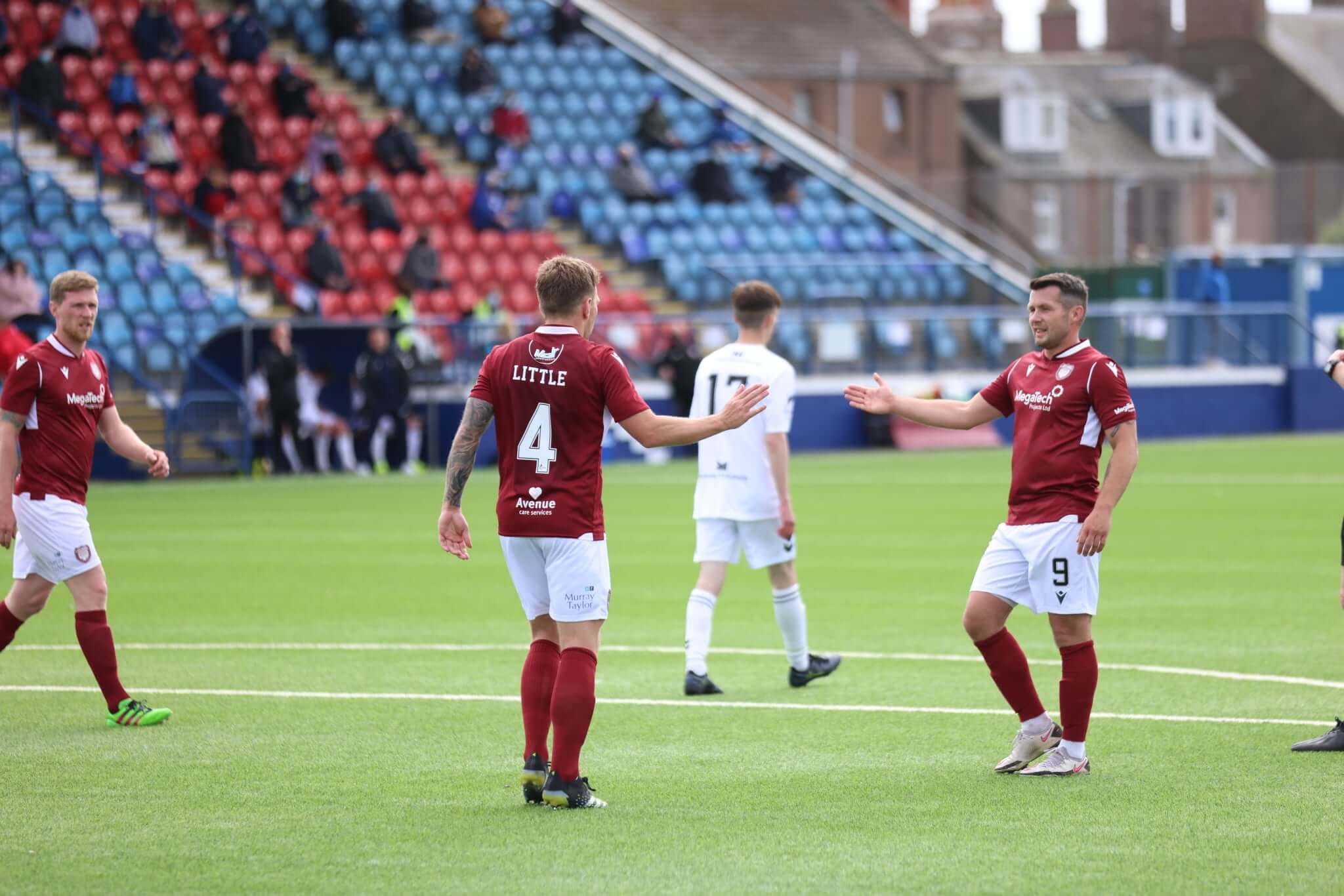 Arbroath returned to action on Saturday as they made the short trip up the Angus coast to take on Montrose in both club’s first pre-season friendly of the new season.

Of course this was the first match for Montrose with their supporters back in Links Park with a few hundred season ticket holders being the fortunate ones to see their team back in action.

There was a tongue-in-cheek rivalry with the Arbroath players being boo’d by some fans as they warmed up but it was all in good spirit as all football players want to be playing back in front of supporters.

Arbroath were without Jason Thomson who went through a minor operation this week and Calum Antell, but otherwise had all other players available including trialists Ciaran Brian and Elie Akobeto.

Derek Gaston started in goals, with Liam Henderson making his debut at left back, whilst Scott Stewart deputised at right back and the defence was completed with Ricky Little and Captain Thomas O’Brien.

It was also a first start for Mark Whatley for Montrose and it did look odd to see Mark in the Montrose colours!

Arbroath attacked the Wellington Street End in the first half with Michael McKenna hit a long range effort after just 80 seconds.

However it was Montrose who would strike first, as Ricky Little was dispossessed on the half way line, Andrew Steeves found Blair Lyons and he ran down the left wing before crossing into the middle with Martin Rennie having the easiest of goals as he hit the ball into the net from 6 yards after just 4 minutes.

Kerr Waddell managed to put the ball out for a corner kick as he tackled Gavin Swankie who was running in on goal from a tight angle in the 11th minute.

On loan Partick Thistle winger Blair Lyons almost doubled Montrose’s lead in the 17th minute after a pass from Whatley allowed the winger to cut inside and just put a shot past the far post.

James Craigen almost caught keeper Aaron Lennox out as he raced in on the keeper who was late to deal with a pass back in the 25th minute.

Liam Henderson was having a good debut at left back, showing great control and touch and being able to link up in the tightest of situations.

Terry Masson almost robbed Derek Gaston of the ball on the half hour mark but the Arbroath keeper was quick to react and claimed the ball.

Bobby Linn hit a shot in the 34th minute which looked destined to burst the net but an interception block from Waddell denied Linn the equaliser.

It was a slow half for the Lichties but just before the half time whistle a series of nice passes and play had the ball fall to Linn but his volley was high over the bar.

Montrose brought on Graham Webster for the impressive Kerr Waddell at the break in the only change.

Scott Stewart was denied the equalising goal in the 47th minute when his shot was tipped onto the post by Lennox only for the ball to bounce directly back off the post and land in the arms of the keeper.

A few minutes later and Stewart again came close this time a strike on the angle flew across the face of the Montrose goal.

Graham Webster had the chance to score from a free kick after a foul by Nicky Low but his curling free kick was just wide of Gaston’s post.

Arbroath’s second half display was much better all round compared to the first half and they started to increase the pressure on Lennox’s goal.

Ciaran Brian headed just wide in the 63rd minute after being played in by a great ball from Colin Hamilton, before Arbroath’s best move of the match seen Hilson link up with Donnelly down the wing before a quick change of feet allowed Donnelly to beat his man, look up and find Paterson hit a stunning back heel which beat Lennox but ran just wide, Nicky Low tried to hit the ball just before it crossed the byline but the angle was too tight and his shot flew across the goal.

Paterson in just his early contribution looks like a player that the Arbroath supporters will love, having played alongside Ben Williamson and Billy Gilmour in the Rangers Youth Team in the short time he was on the pitch was looking to get the ball all the time, harassing and chasing defenders when he didn’t have it and once in possession only was looking to get the ball towards goal.

Lennox again made a fantastic save this time diving low to block a Dale Hilson free kick in the 71st minute.

Just sixty seconds later Arbroath equalised, a corner kick came in which Craig Brown failed to clear and Little was there at the back post to show great composure to smash the ball into the net off the underside of the cross bar.

Just after the goal Arbroath brought on trialist Elie Akobeto for Luke Donnelly.

In the dying seconds Thomas O’Brien ran forward into the box before hitting a strike at goal which Lennox could only parry away, the ball fell to Stewart but his volley was just over the bar.

The old cliche of a game of two halves with Montrose in control of the first half but Arbroath well on top for the second half. A tough match for both sets of players on a humid afternoon as they start the hard work for the long season ahead. Getting used to new boots with the astroturf pitch and getting back into 90 minutes meant a good work out with positives to take for both teams.