Kelly Clark – Q and A 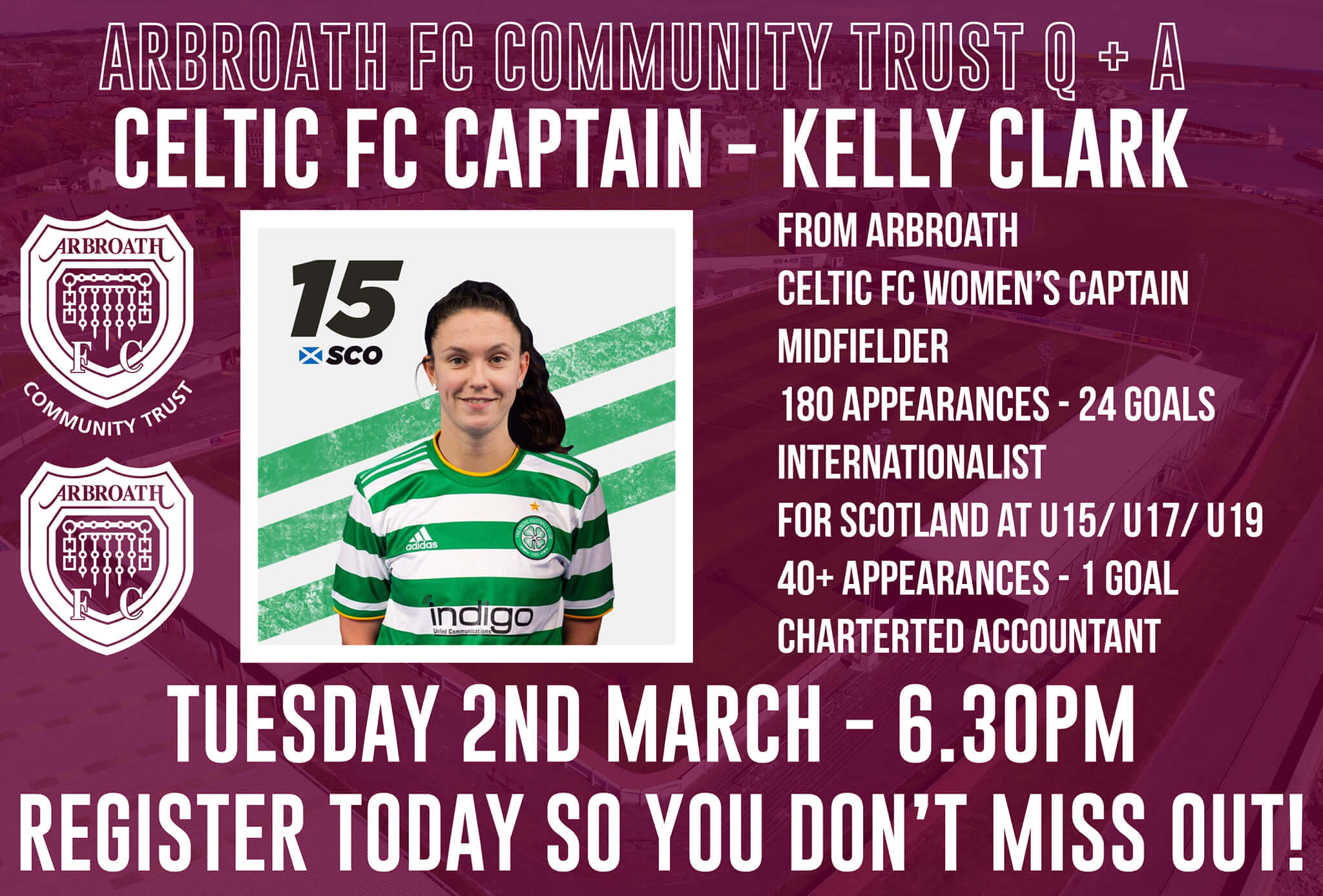 Arbroath FC Community Trust and the Young Lichtie Club present – Q+A with Celtic Captain Kelly Clark
This is a good one!
After very successful Question and Answer sessions with David Gold, Charlie Adam, Bobby Linn, Jason Thomson and Alex Robertson – Arbroath FC Community Trust are excited to offer Young Lichties around the Arbroath Area a question and answer session over Zoom with Celtic FC Women’s Captain Kelly Clark, who is from Arbroath.
The zoom session for Young Lichties will be next Tuesday 2nd March from 6.30pm to 7.30pm
Kelly is a real life inspiration for all footballers who come from the Arbroath Area.
At the age of 7 in 2001 Kelly started playing football for the Arbroath girl’s side Arbroath Inchcape Strollers. In 2006 she played and scored in the winning Inverbrothock Watters Cup Final Team.
She moved to Forfar Farmington in 2010 because they had a Women’s team. Forfar Farmington Manager Mark Nisbet handed Kelly her full Women’s debut that year at just 15 years old.
In 2013, Kelly moved to Stirling University before joining Celtic FC where she quickly established herself and won the club’s 2014 Player of the Year gong and became the Captain of Celtic FC Women’s team in 2016.
Kelly has played 180 games for Celtic and has 24 goals for the club. Before the global pandemic struck, Kelly was also a regular pundit on Celtic TV.
Internationally Kelly made her Scotland debut in 2007 against Wales for the U15s. Including friendlies she made over 40 appearances for the U15s, 17s and 19s combined scoring 1 goal against Belarus in 2012.
Kelly has combined her amazing football career with an education and a career also under her belt and is now a qualified Chartered Accountant for Deloitte, with anyone who works in finance will know, it takes a lot of dedication to become a chartered accountant.
A real inspiration, this will be another outstanding question and answer session!
We are opening the session up to all Young Lichties in the Arbroath area.
To be added to the list of participants, please contact Kevin on 360tft@gmail.com
Please note that the numbers will be capped at 100 kids so be quick to register to make sure you don’t miss out!
C’mon the Lichties!