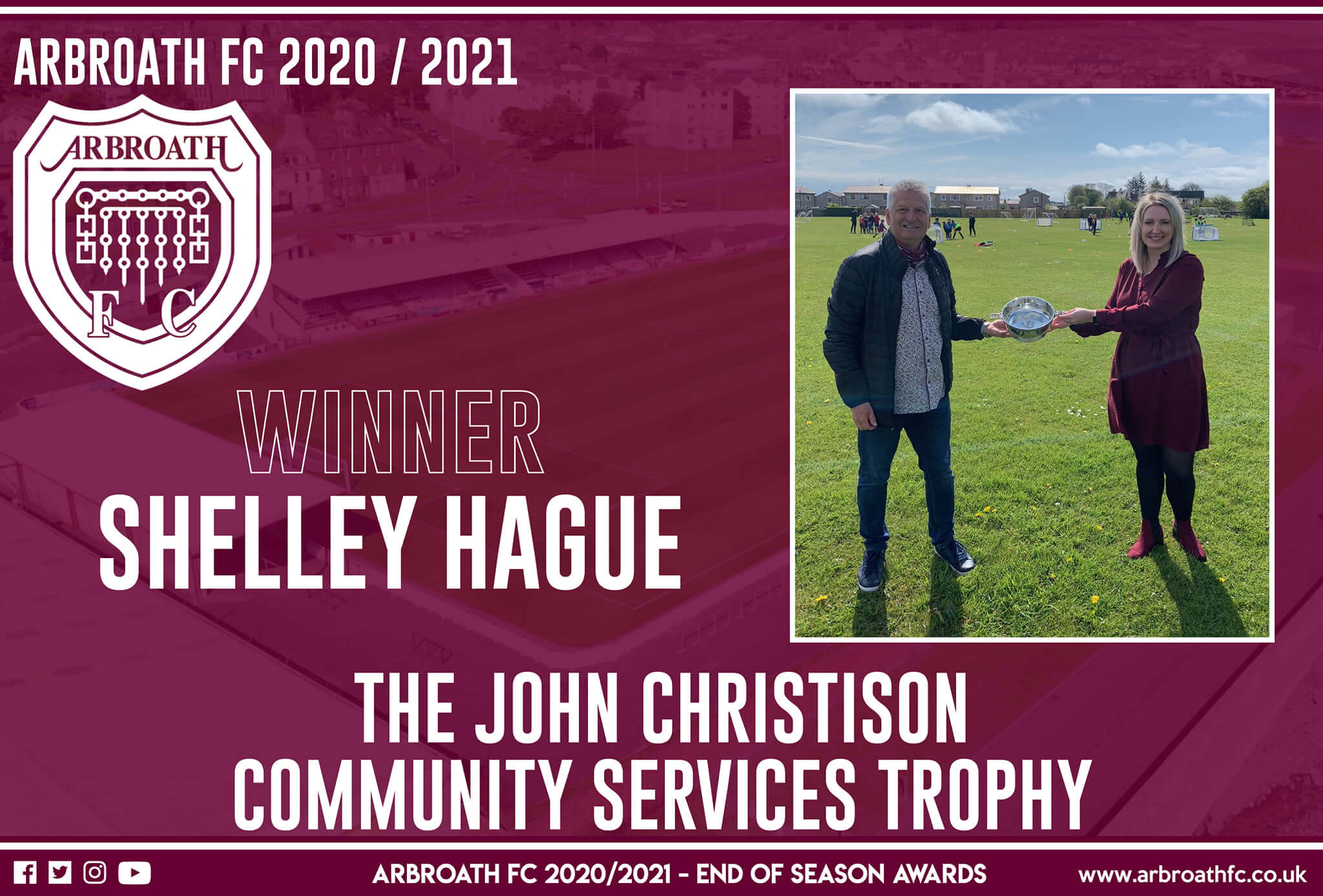 John Christison Community Services Trophy – Shelley Hague
We have one final trophy to present this season, and it is the John Christison Community Services Trophy.
This award is for a supporter of the club or a volunteer within the community who we feel has contributed above and beyond to help the football club, and is named after former Chairman and Honorary President, John Christison.
The trophy is in its 4th year and the winner is voted for by the Arbroath FC Board of Directors.
Last year the award was presented to Brian Cowie for his hundreds of hours he has volunteered at the club and had saved the club thousands of pounds whilst Neil Douglas and Graham Black were previous winners.
This year we are delighted to announce that the John Christison Community Services Trophy has been awarded to Shelley Hague.
Shelley Hague is our Arbroath FC Community Trust Chairperson, and for several months she has been working tireless and it is down to her that the Trust has blossomed in such a short period of time.
Known throughout Angus from her role at Angus Council, Shelley for the last eleven years has also been involved in supporting social enterprise, levering funding into the area and making Angus a great place, to live, work and visit.
Shelley is no stranger to football having played for the Barry girl’s team for 6 years back in the 90’s and is also a winner having lifted the North East Scotland Cup!
Shelley was the unanimous choice of the board this year for the leadership she has shown in driving the Arbroath FC Community Trust forward to the strong position that we are in after such a very short time.
Arbroath Chairman Mike Caird went on record and said “As any good football manager would say its a “team game” and while everyone of the trustees, employees and volunteers are playing their part in the success of the Trust the “leader on the park” and “captain” this season has been Shelley. Her drive, knowledge and determination to succeed to get things done has made the Arbroath FC Community trust the one to beat.”
This morning during a session of the Arbroath FC Community Trust Football Academy Chairman Mike Caird presented Shelley with her trophy, an an apt venue as the enthusiasm and enjoyment of everyone attending there is a testament and cumulation to all the hard work Shelly and the trust has achieved in this short time.
Thank you again Shelley Hague and congratulations on being awarded the John Christison Community Services Trophy for 2020/2021!
C’mon the Lichties!