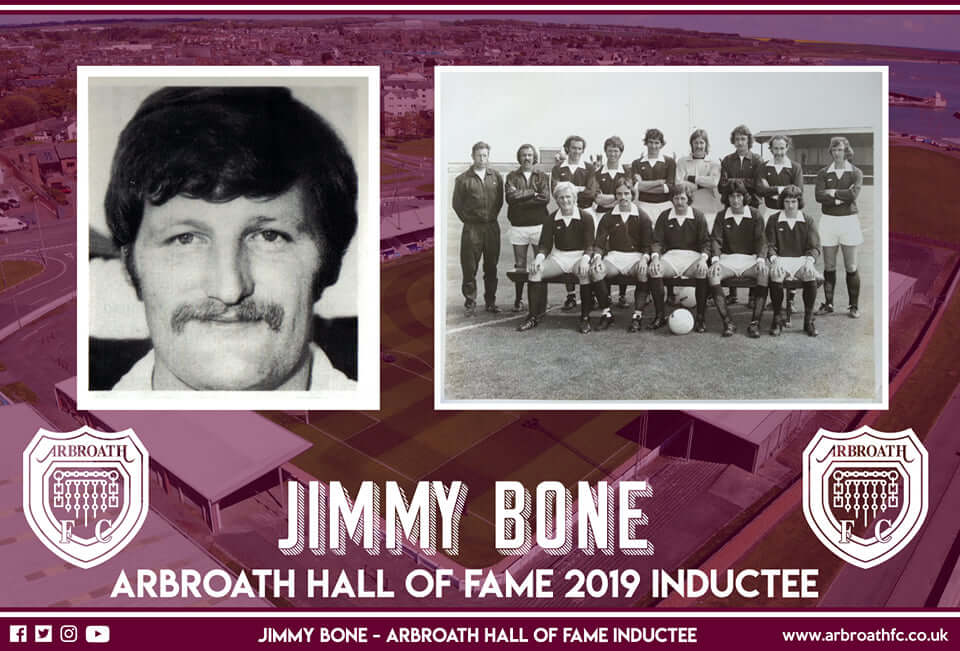 We are delighted to announce that former Arbroath Striker and Manager Jimmy Bone is our second 2019 Hall of Fame Inductee.

Again we thank the supporters of the club who voted for the Jimmy into the Arbroath Hall of Fame and in turn Jimmy is forever recognised as a true Lichtie Legend.

Jimmy started his career with Partick Thistle, before moving to England to sign for Norwich City were he helped the Canaries to secure the second division Championship at the end of the 1971-1972 season before scoring the club’s first ever goal in Division One at the start of the the 1972-1973 season.

He moved on to Sheffield United, before sealing a move back to Scotland in 1974 with Celtic.

Jimmy scored on his Arbroath debut in a 2-2 home draw with Dundee in January 1975, with Andy Penman also getting on the scoresheet.

He was top scorer for the Lichties in his first three seasons and went on to score 41 goals in 97 league games between 1975 and 1977, but not even his impressive goal tally could help Arbroath reach the new Premier Division, following League reconstruction in 1975-1976.

In January 1978, Alex Ferguson signed Jimmy for £25,000 at St Mirren. It would be one of the last signings made by Sir Alex at St Mirren, but his successor, Jim Clunie would name Jimmy as the St Mirren Captain.

He guided St Mirren to qualification in the UEFA Cup before joining Toronto Blizzard on loan, before sealing a move to Hong Kong Rangers in the 1982-1983 season.

Jimmy returned to Scotland with Hearts in 1985 but returned to Gayfield as a Player-Manager and spent two seasons at Gayfield scoring 2 more goals in 30 appearances.

The lure of old club St Mirren meant Jimmy left Gayfield and joined the Buddies this time as Assistant Manager to Alex Smith in 1987.

We are absolutely thrilled to be inducting Jimmy into our Hall of Fame!