Home - Thank you to Ewan Smith and Allen “the Fermer” Innes

Thank you to Ewan Smith and Allen “the Fermer” Innes 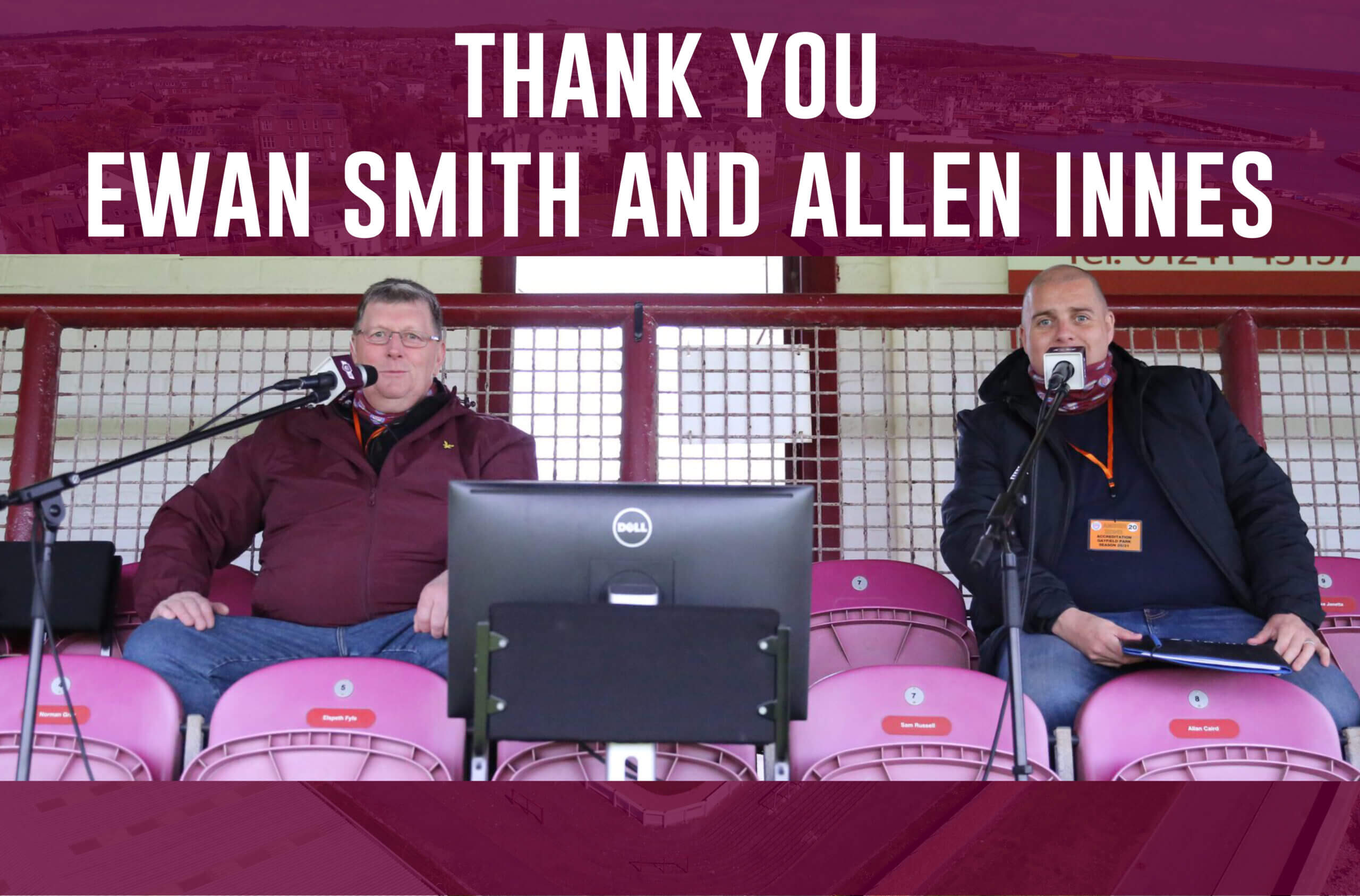 Thank you to Ewan Smith and Allen “the Fermer” Innes

Lichties who regularly tune in to Arbroath FC TV or watch our highlights may have noticed a change in voices behind the microphones this season.

Our Dynamic Duo of Ewan Smith and Allen “the Fermer” Innes who provided us all many smiles and entertainment last season whilst our supporters were denied their Saturday trips to Gayfield and whilst the world was doom and gloom are unfortunately for the time being are taking an early substitution.

Both came through all the pre-season tests, and contracts were being negotiated but book deal offers, invites to the podcast big hitters and an lucrative deal from the break away European Super League have made them both rethink things, well that and we couldn’t find a microphone sponsor for Allen after he broke one nearly every match.

Of course we are just kidding. As most of you will know, Ewan Smith who has been a sports journalist for over 20 years last season combined his match reports and interviews with also being the Marketing and Communications Manager at Lathallan School, however Ewan successfully fought off many candidates to become a full time sports reporter at DC Thomson.

We were all thrilled for him and very proud and as you may have noticed news stories about Arbroath and the fellow Angus clubs have started to get a lot more coverage in the local papers.

Whilst Ewan would love to still be bringing you commentary every second Saturday afternoon, it does mean that he wouldn’t be able to his sports reporting for DC Thomson, so has reluctantly had to pass over the microphone baton. We do hope that at some point may get back behind the microphone. The door is aways open!

You don’t get the nickname “The Fermer” for no reason, and most of you will know Allen “The Berry King of Angus” has recently become an Instagram influencer and sensation for M&S and whilst Allen also loves commentary he also loves being on the terraces with his friends, and having a wee coca cola before and after the match! Allen has already been on the microphone during this pre-season and has offered his services if we ever need him, and of course we hope that both Allen and Ewan will be reunited again behind the mics on Arbroath FC TV.

The feedback we received from both Arbroath and many, many of the away supporters who tuned in last season were of the highest praise for Ewan and Allen’s refreshing and passionate commentary and we know that they both loved Saturdays and really helped grow the Arbroath FC TV stream.

So where do we go from here? Well we were lucky to have Jason Thomson on the microphone for the St Johnstone match, giving you his expertise and a professional insight into the game, but of course we all want to see Jason back on the pitch.

Many of you may know Fraser Clyne. Fraser is a journalist, author, Arbroath historian and during the 1980’s and 1990’s was one of the country’s leading marathon runners, having represented GB at many events, and also representing Scotland in the 1986 Commonwealth Games.

Fraser is at Gayfield every week doing match reports and interviews and as Arbroath FC Historian, there really isn’t anyone else out there who knows more about Arbroath FC.

Making his debut last week, Fraser has already received high praise on his commentary and we look forward to hearing more from him tomorrow and the coming weeks.

Arbroath FC TV are also going to try and have a commentator from the visiting team behind the microphone as well, so there is a balanced view and good insight into both teams on the pitch.

We know many of our supporters will be sad at Ewan and Allen (temporarily) hanging up their mics, but you are in good, safe, knowledgeable hands with Fraser!

Thank you again to Ewan and Allen and good luck to Fraser today!