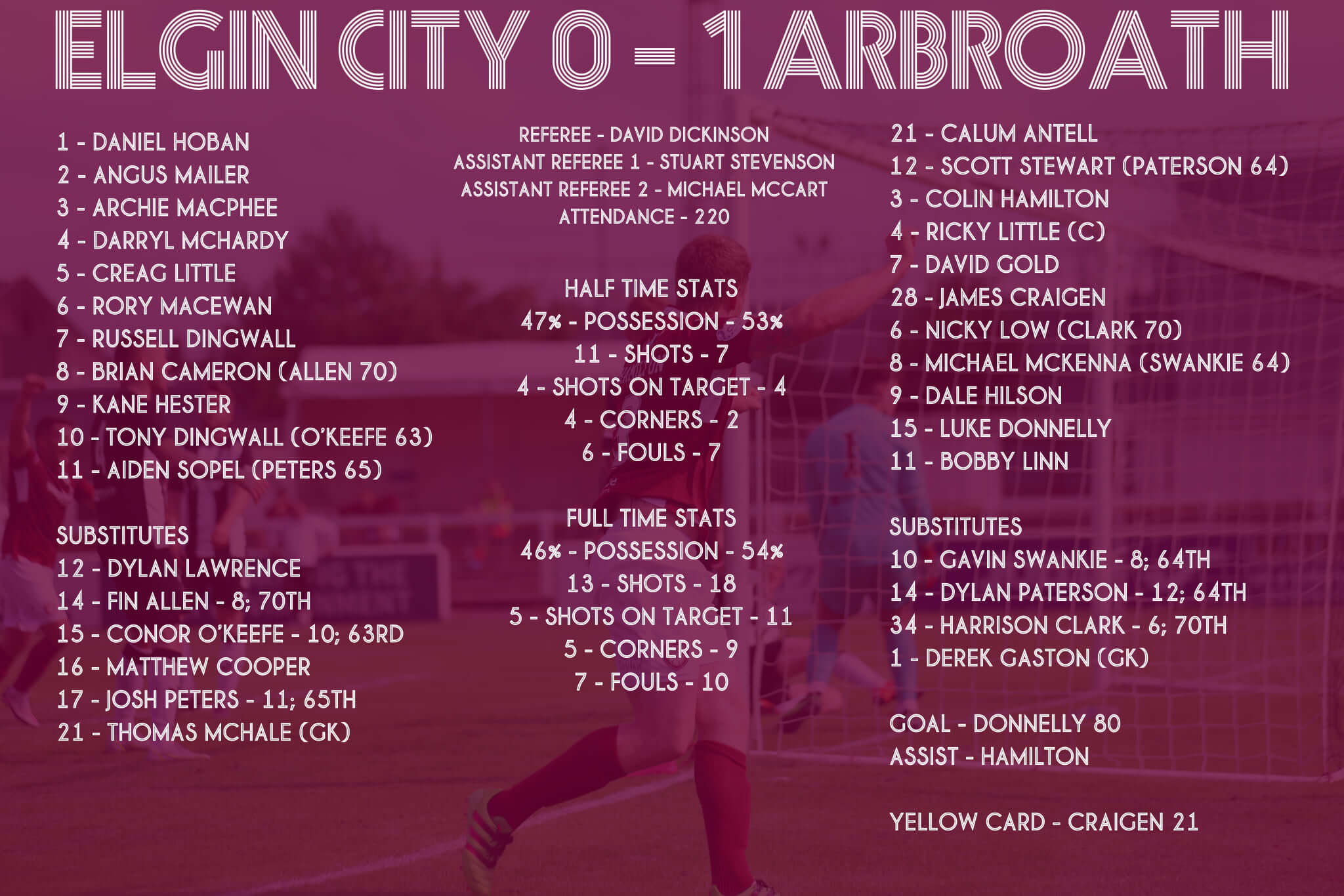 Arbroath kicked off the 2021/22 season with an away win at Elgin City on the opening weekend of the new League Cup which is now under sponsorship of Premier Sports.

Elgin City have become familiar opponents in the League Cup having played one another in 2018, 2019, 2020 with the Lichties coming out on top in each of the matches.

Arbroath boosted their squad with the arrival of 18-year-old defensive midfielder Harrison Clark who completed a whirlwind week by signing on loan from Livingston who he himself had just joined that day after impressing Livingston Manager David Martindale during a trial which included Monday’s night match against Arbroath where he also caught the eye of Arbroath Manager Dick Campbell.

Arbroath were without Jason Thomson who is still recovering from a knee operation, whilst Captain Thomas O’Brien missed out and Liam Henderson served a one match suspension. Goalkeeper Derek Gaston who suffered a dislocated finger on Monday was fit enough to be named as a substitute.

It was a very humid afternoon in Elgin with Arbroath lining up in a 4-4-2 formation. Calum Antell made his Arbroath competitive debut with Scott Stewart deputising at right back and David Gold starting at left back with Colin Hamilton joining Ricky Little in the centre of defence.

Michael McKenna started out on the right wing, with Nicky Low and James Craigen in central midfield and Bobby Linn out on the left with Dale Hilson and Luke Donnelly starting up front.

Elgin City were quick out the traps and within seconds after kick off had won a free kick in a good position after a foul by Colin Hamilton.

Brian Cameron struck wide in the 2nd minute before former Lichtie Kane Hester was high and wide with a shot just 60 seconds later.

Archie MacPhee was next to threaten for the home side but his shot was blocked at the expensive of a corner kick.

It took Arbroath a while to get back into the game but Dale Hilson came close to the opening in the 10th minute when his header from a Nicky Low free kick came back off the Elgin City post.

Play was racing from end to end with Ricky Little firing over before Calum Antell denied Rory MacEwan at the other end.

Elgin were definitely the side who looked like they were going to take the lead with Brian Cameron coming agonisingly close as his shot spun just over the cross bar landing on the roof of the net in the 14th minute.

James Craigen was the first name of the afternoon to land in Referee David Dickinson’s book as his foul on Tony Dingwall was deemed worthy of a booking in the 20th minute.

Kane Hester came close with a header just 2 minutes later before Bobby Linn had a volley from 18 yards saved by Daniel Hoban in the Elgin goal, with Nicky Low having a shot saved a minute later again by Hoban.

Action raced on, with a Creag Little header being saved by Antell after 28 minutes.

Bobby Linn who was looking sharp and really fit went on one of his darting runs before taking the shot himself with Hoban making a save down to this right in the 31st minute.

Elgin turned up the pressure with Cameron heading at goal, Tony Dingwall firing just wide before Kane Hester should have opened the scoring. The quick striker ran free of the Arbroath offside trap and was running in on Antell but his shot was direct at the hands of the Welsh stopper.

It was then the turn of Arbroath to threaten as Bobby forced Hoban into another save in the 37th minute before Ricky Little’s header from the following corner was blocked.

On the stroke of half time Hoban made two fantastic saves to deny Colin Hamilton on both occasions, first from a header, before a left footed volley.

It may have been the half time team talk, or just the fitness levels but Arbroath definitely came out looking sharper in the second half and soon started to dictate play with Dale Hilson missing from a corner kick in the 50th minute before denying Linn 2 minutes later who had cut inside his marker and fired in a shot at goal.

Despite Arbroath taking control Elgin still looked dangerous and again it looked like they were going to take the lead as Brian Cameron ran in on goal with only Antell to beat, and his shot did beat the Arbroath keeper but agonisingly for the Elgin Captain his shot bounced off the post before being cleared.

The pace was relentless and just seconds after almost going behind Linn surged past 2 defenders before having his shot brilliantly saved by Hoban yet again.

Both sides made substitutions just after the hour mark. Elgin brought on Conor O’keefe and Josh Peters on for Tony Dingwall and Aiden Sopel with Gavin Swankie and Dylan Paterson replacing Michael McKenna and Scott Stewart.

Arbroath sought a penalty in the 64th minute but Referee Dickinson wasn’t interested as Linn seemed to be pushed off the ball.

In the 70th minute both sides made their final change with Harrison Clark making his Arbroath debut as he replaced Nicky Low and Fin Allen replaced Brian Cameron.

Gavin Swankie was denied by Hoban in the 79th minute who pulled off another remarkable save after Swankie latched on to a great through ball before firing across goal.

The goal did come though, just seconds later. A Bobby Linn corner kick was cleverly headed back into the middle by Colin Hamilton and his ball found Luke Donnelly who made no mistake from 3 yards out to head Arbroath into the lead.

Arbroath almost doubled their lead in the 86th minute but Dylan Paterson’s curling effort was just over.

Elgin City had a final chance to secure a draw but Calum Antell denied Josh Peters with another fine save to mark a clean sheet on his debut.

In the final minutes of stoppage time Bobby Linn was once again denied by Hoban before debutant Clark just headed wide.

A very hard win for Arbroath with both teams really feeling it in their legs come the final whistle. A well organised and stubborn Elgin City who were inspired by their man of the match goalkeeper, Daniel Hoban.

Arbroath with 3 players missing are definitely still a few players short, but with the Championship a few weeks away Manager Dick Campbell is working very hard behind the scenes.

An opening win, a clean sheet is a great way to start the new season, but the hard work continues as East Fife visit Gayfield on Wednesday night.