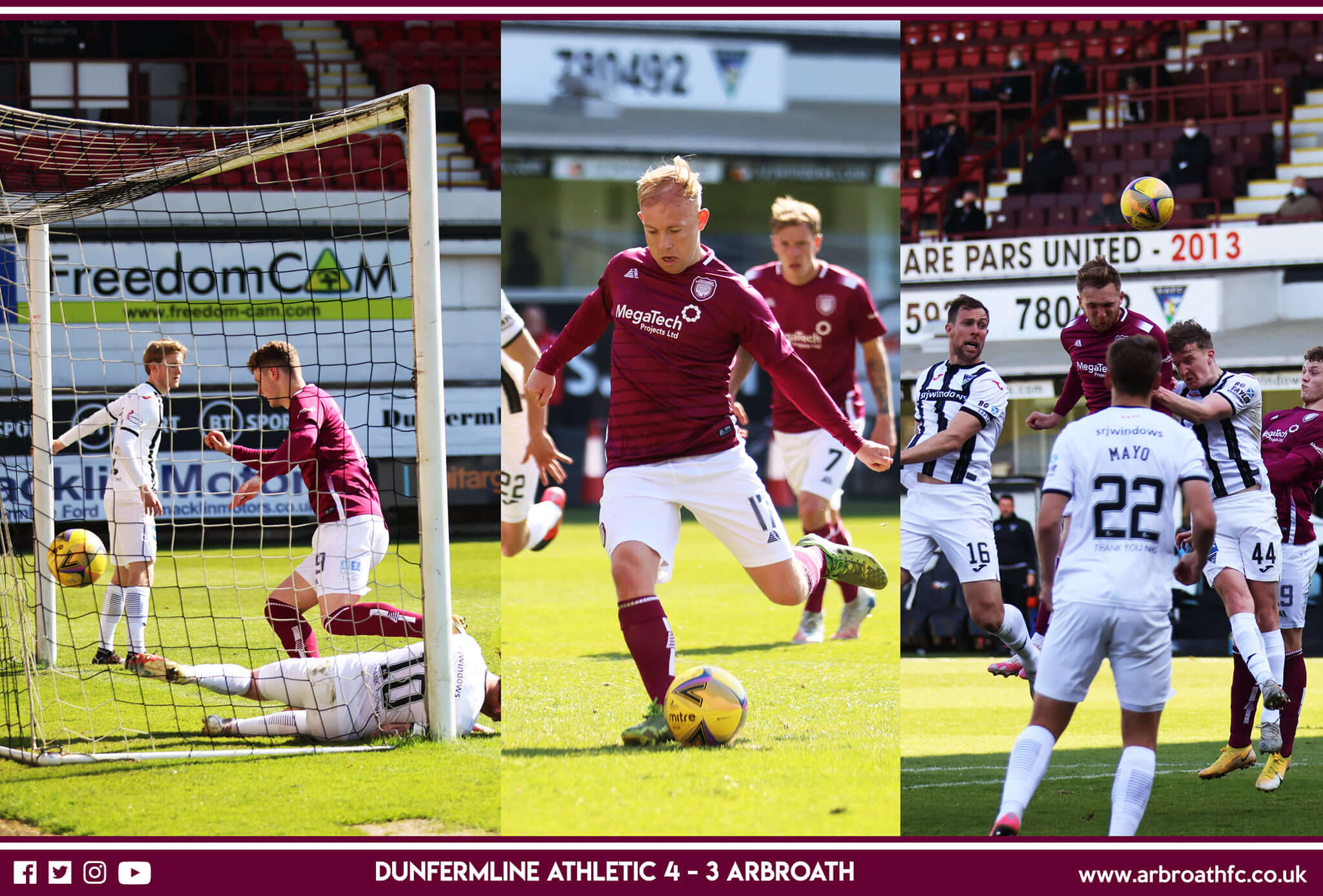 Arbroath’s Championship fate will go down to the final weekend after they narrowly lost 4-3 to Dunfermline Athletic in a match filled with controversy.

A draw or a win on Friday night will mean Arbroath avoid the Championship relegation play-off.

Arrboath started well but it was Dunfermline’s Steven Whittaker who had a hot blocked before Aaron Comrie forced Derek Gaston to make a save in the 5th minute but then Arbroath started to get a hold on the game and started to really pressure the Pars defence with Kris Doolan forcing Owain Fôn Williams into a low save in the 7th minute before Ben Williamson forced another just 2 minutes later.

Dunfermline won a penalty against the run of play in the 10th minute and it looked rather soft as Craig Wighton went over Colin Hamilton.

Declan McManus fired straight down the middle and Dunfermline had the lead.

Nicky Low fired wide in the 14th minute and It was to go from bad to worse for the Lichties as a long ball from Josh Edwards on the counter found Kevin O’Hara who found the far corner of the Arbroath net with an angled drive from the edge of the 6 yard box just 4 minutes later.

It was hard lines for Arbroath who found themselves 2 goals down despite playing good football.

Nicky Low was looking lively and forced a save from Fôn Williams in the 32nd minute as a corner kick was conceded. From Low’s corner kick Thomas O’Brien’s header was punched clear by Fôn Williams but only onto the chest of Jack Hamilton who was in the right place at the right time and the ball bounced off his chest and into the goal.

The goal lifted Arbroath and Ben Williamson showed amazing grit, strength and determination to hold off Steven Whittaker and Dom Thomas and somehow still get a ball into the box which caught out the Dunfermline players and Ewan Henderson pulled down Jason Thomson with Referee Steve McLean pointing to the spot.

Nicky Low stepped up and his penalty kick went in off the underside of the cross bar to pul Arbroath level in the 35th minute.

A Craig Wighton shot in the 41st minute was the last real chance of the first half.

There were no changes at half time with Declan McManus having the first shot of the second half in the 51st minute.

Ricky Little was yellow carded in the 52nd minute before Dom Thomas had a shot saved in the 54th minute.

Nicky Low was full of confidence and forced Fôn Williams into another save in the 56th minute.

Then the real moment of controversy. Thomas O’Brien went up for a high ball in the Dunfermline half and went crashing down onto the ground on his neck. As he lay in a heap motionless the Arbroath bench and Players yelled for the Referee’s attention but play raced on and Craig Wighton netted.

As Dunfermline celebrated the Arbroath players and bench were livid at Referee McLean who had also let play go on in the first half as Jack Hamilton laid on the ground with a head knock.

Arbroath pressed and Scott Stewart came on for David Gold in the 63rd minute before Michael McKenna replaced Kris Doolan a minute later.

Dunfermline were looking for a 4th as Steven Whittaker hit a beautiful strike which Derek Gaston did well to tip away for a corner kick before Lewis Mayo headed over.

Luke Donnelly made a welcome return to action after 2 months out with a knee injury as he replaced Dale Hilson in the 71st minute.

Arbroath should have had a penalty in the 71st minute when Jack Hamilton’s goal bound shot came off he arm of Lewis Mayo but the referee nor linesman were interested.

Of course Dunfermline would score just seconds later and there was nothing Arbroath could do about the 4th goal as a wonderful piece of skill from former Lichtie Craig Wighton who made it 4-2 in the 75th minute with a wonderful placed volley.

Arbroath kept pressing and Scott Stewart pulled a goal back with a stunning header from 16 yards in the 82nd minute to make it 4-3.

The final 8 minutes of normal time seen Arbroath lay siege to the Dunfermline goal and it is remarkable how none of the efforts went in!

Scott Stewart had a shot blocked, Thomas O’Brien headed just wide, Ricky Little headed just over then a corner kick from McKenna was cleared off the line.

The Arbroath players gave it their all, but it just wasn’t to be, but 7 goals in 2 matches has given the team a huge lift and the character again shown to come back from 2 goals was extremely impressive once again in this team which is full of character and determination.

It is a huge game on Friday, and the players all know what they need to do.