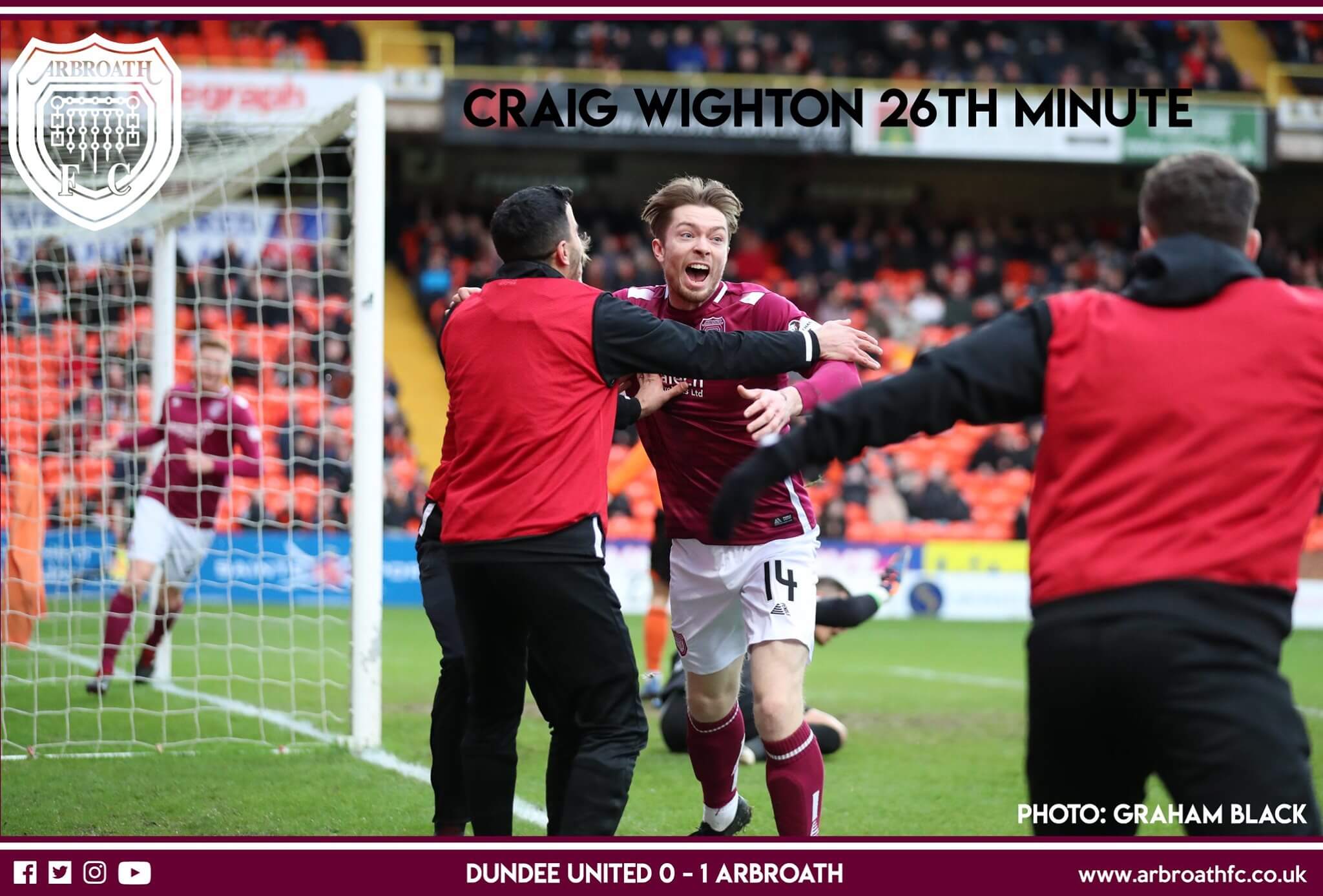 Michael McKenna missed out with a slight knock, whilst Logan Chalmers was unable to face his parent club. Gavin Swankie, Dale Hilson, David Gold and Craig Wighton all returned to the side, with Bobby Linn, Scott Stewart and Luke Donnelly dropping to the bench with new signing James Craigen named as a substitute.

Arbroath backed by 424 Lichties made a bright start, whilst United suffered an early blow as striker Osman Sow had to be stretchered off with an ankle injury.

Dale Hilson and Craig Wighton were working hard and in the 26th minute, Hilson laid the ball into the path of Colin Hamilton who fired a low ball into the box which was met by Craig Wighton who hit a low shot which went through the legs of Benjamin Siegrist and into the net to send the Arbroath fans wild with celebration.

Dundee United were swarming all over the Arbroath defence as they shot down the hill towards their own fans but only a 37th minute shot by substitute Declan Glass troubled Derek Gaston who pushed the ball over his bar for a corner kick.

In the 43rd minute a looping shot by David Gold forced Siegrist into another save as the Lichties took the a 1 goal lead into the break.

As expected Dundee United through everything they could at Arbroath in the second half as they looked for an equaliser. However Arbroath’s back line of Jason Thomson, Ricky Little, Thomas O’Brien and Colin Hamilton worked hard throwing their bodies on the line. The rest of the Arbroath players chased every ball with Mark Whatley, David Gold and Miko Virtanen breaking up play at every chance.

Gavin Swankie had a fine game on his return playing on the right wing with Hilson on the left flank both providing support to their defenders, with Craig Wighton running tirelessly up front and coming back to help out.

James Craigen made his Arbroath debut in the 71st minute replacing David Gold, before Scott Stewart came on for Gavin Swankie.

Derek Gaston who commanded his box and collected cross after cross, made a crucial save in the 84th minute when he denied Lawrence Shankland from 4 yards.

Omar Kader replaced Dale Hilson with 4 minutes to go, but an extra 7 minutes of injury time were added, but the players who gave it their all and them some, hung on for a famous win!