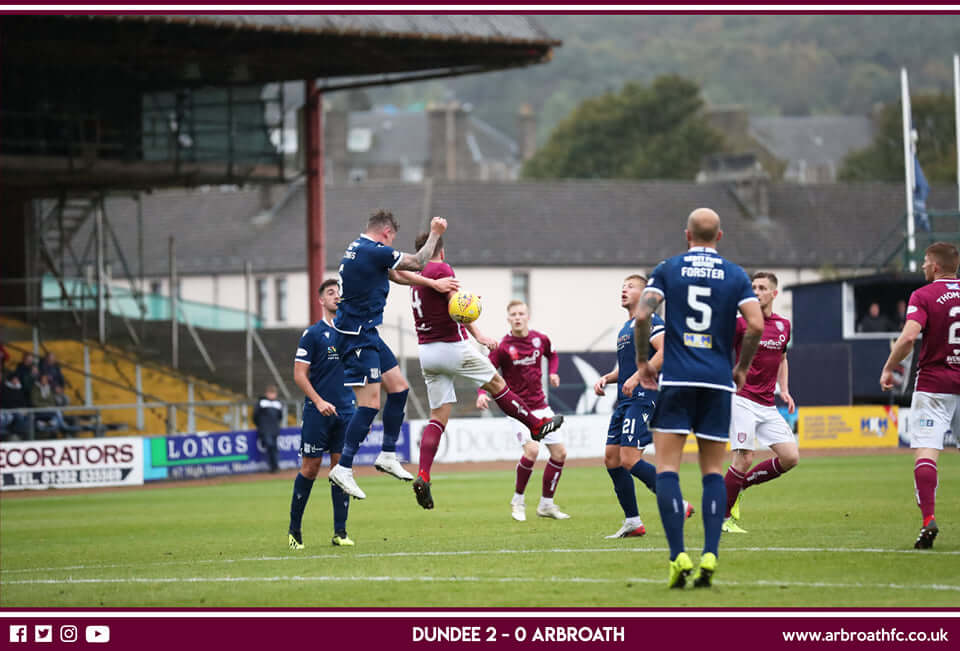 Dundee secured a 2-0 victory over Arbroath today thanks to two special goals by Declan McDaid.

Arbroath Manager Dick Campbell made 5 changes to his team with Gaston, Gold, Virtanen, Stirling and Doris coming into the side for Arbroath’s first visit to Dens Park for a league match in over 40 years.

Dundee were content play the ball out from the back, with the Arbroath midfield trying their best to intercept a pass or steal possession, with the Lichties having 4 first half corners.

McDaid opened the scoring when a long range strike from 25 yards which hit off Gaston’s right hand post, before finding the back of the net.

James Murphy replaced David Gold at half time as Arbroath attacked towards another great turn out from the Lichtie support.

McDaid made it 2-0 in spectacular fashion as curled the ball high into the net from inside the Arbroath box.

Arbroath went for it and hit Ben Stirling rattled the post whilst Jason Thomson had a good appeal for a handball as he smashed the follow up shot towards goal.

From the resulting corner again the Lichties had another penalty appeal on the edge of the box.

Substitue Greig Spence almost got on the end of an Omar Kader shot but Jack Hamilton made a crucial save.

The game became to be disjointed with the Referee blowing his whistle for every tackle for both sides.

Dundee were able to see off any challenge from the Lichties, in a game where again the team performed well but two special goals by McDaid as the difference.