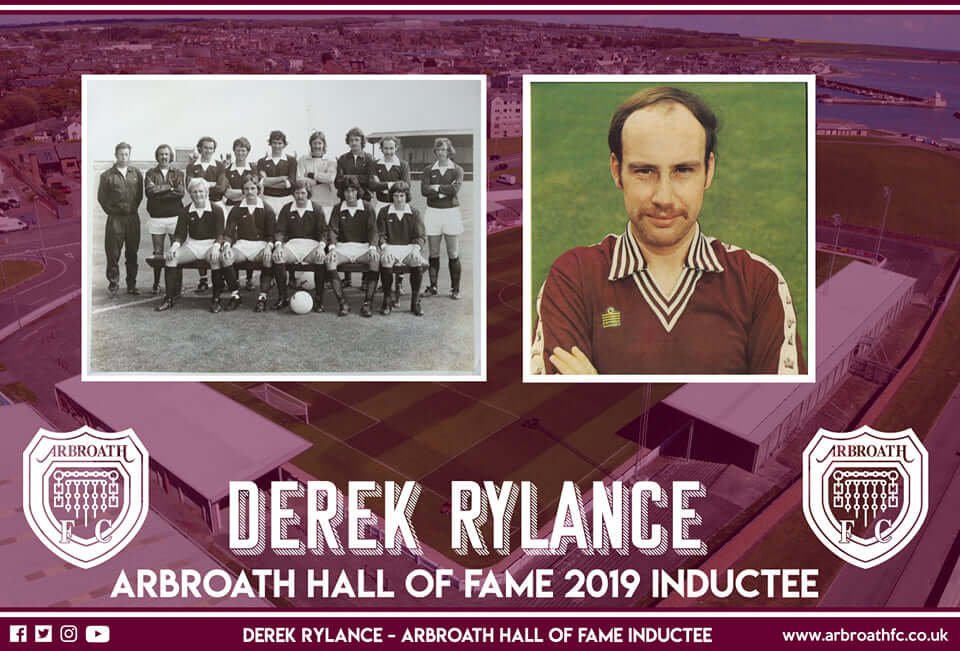 We are delighted to announce that former Arbroath defender Derek Rylance is our third and final 2019 Hall of Fame Inductee.

Again we thank the supporters of the club who voted for the Derek into the Arbroath Hall of Fame and in turn Derek is forever recognised as a true Lichtie Legend.

Derek Rylance made 275 league appearances between 1971 and 1981, scoring six goals, including a perfect hat-trick against Celtic on the Monday 8th August 1972.

Having started his career at Kinnoull Juniors in Perth, Derek signed for the Lichties at the end of the 1971/1972 season under legendary Manager Albert Henderson.

Arbroath had made it into the First Division for the 1972/1973 season and it had started with the League Cup with East Fife, Stirling Albion and Celtic all in Arbroath’s section.

Derek went to work on the Monday morning, starting his job at a Whisky Warehouse in Perth, like many part-time players to this very day who work full time. Thankfully Derek was able to get the afternoon off to make it down to Glasgow.

With Parkhead undergoing reconstruction, the away match against Celtic Park was held at Hampden with a meagre crowd of just 4,962 turning out for what would be a remarkable match.

Rylance normally played as a left full-back but he was moved to the inside left position for this fixture, and in fact this would only be only his 8th start for Arbroath.

Derek opened the scoring in the 22nd minute with a right foot shot after Denis Connaghan had parried away a shot by Kenny Payne.

However Celtic came back, with Tom Cargill scoring an own goal in the 33rd minute, before Harry Hood gave Celtic the lead, before Kenny Dalglish made it 3-1 for Jock Stein’s side in the 57th minute.

A shout of “Leave it” to Billy Pirie meant Derek made it 3-2 with a left foot strike in the 68th minute.

In the 77th minute, Derek jumped between Billy McNeill and George Connolly to head in an Eric Sellars cross to make it 3-3 and to complete the perfect hat-trick.

Despite the hat-trick and often wearing the number 8 or 9 shirt, Derek played for Arbroath predominantly in defence, but on a few occasions played in midfield.

Derek also scored against Celtic in a 2-2 draw at Gayfield, with fellow Hall of Fame inductee Jimmy Bone also on the scoresheet.

Another famous game against the old firm that Derek played in was our famous 3-2 win at Ibrox on the 2nd February 1974.

Rangers started strongly and Marshall was called into action as the light blues went for an early goal, but the big keeper stood firm. Penman put Cant through on goal, but the inside man shot over the bar.

Rangers did break through in the 38th min. when Scott outpaced Donald on the right, and sent over a cross which McLean hit on the half volley past Marshall.

Arbroath equalised in the 62nd min. when Penman’s dipping centre was missed at the near post by Hunter, and  Fletcher nipped in to score from a few yards out. A minute later Penman slipped the ball to Donald on the lichties right, the full back sent a high ball into the middle, and Pirie rose to bullet the ball into the net.

This spurred Rangers on and when Cant tripped Parlane in the box in 68 mins., the big striker sent the resultant penalty past Marshall.

With four minutes remaining, Arbroath got the winning goal. Fletcher chased a long ball through the middle, beating Jardine, and shot past the advancing Hunter and into the net.

You can relive that game here;

Derek left Arbroath in 1981, and made a return to home town club, Kinnoull Juniors.

Having being such a loyal servant to the club, making 275 league appearances and being part of a wonderful era at Arbroath FC, Derek is a Lichtie Legend.

We are absolutely thrilled to be inducting Derek into our Hall of Fame!