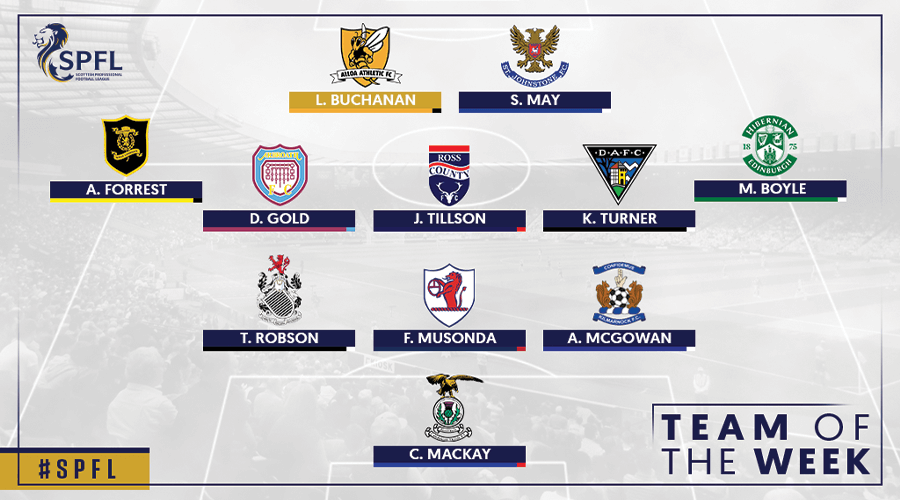 Congratulations to two goal scorer and Man of the Match on Saturday, David Gold who has this week been named in the SPFL Team of the Week!

David’s two goals have helped us reach the last 16 for the first time in 27 years!

CRAIG FOWLER FROM A VIEW FROM THE TERRACE NAMES HIS TEAM OF THE WEEK, WITH ALLOA ATHLETIC STRIKER LIAM BUCHANAN THE STAR MAN…

GK – Cammy Mackay (Inverness CT)
ICT were made to work hard for their 1-0 victory over East Fife, with keeper Mackay kept busy. The youngster responded to the challenge, however, keeping a clean sheet.

DR – Aaron McGowan (Kilmarnock)
It hasn’t all been plain sailing for McGowan since his move to Rugby Park but he was given a chance in the 2-0 win over Dumbarton and excelled.

CB – Frankie Musonda (Raith Rovers)
Saturday was a tough shift for the Championship leaders in their Fife derby at Cowdenbeath but they earned a 1-0 win, thanks in part to Musonda’s play at the back.

MR – Martin Boyle (Hibernian)
The Hibs attacker looked back to his best against Dundee, continually troubling the away defence with his pace and dribbling ability and notching two assists.

MC – Kyle Turner (Dunfermline Athletic)
A rare place for a substitute in this team, but it’s deserving for the former Stranraer star whose arrival off the bench sparked Dunfermline into life as they came back from 2-0 down to defeat Clyde. He even provided the cross for the winning goal – which should maybe count as his goal as replays don’t seem to suggest official match-winner Paul Watson got much on the ball!

MC – Jordan Tillson (Ross County)
The midfielder helped County control the match as the Staggies ran out comfortable 3-0 winners in their final Betfred Cup game against Stirling Albion in Dingwall.

MC – David Gold (Arbroath)
The Red Lichties have made it to the last 16 for the first time in 27 years thanks to their 3-0 triumph over Elgin City at Gayfield and midfielder Gold netted twice in the historic victory.

ML – Alan Forrest (Livingston)
Forrest was the star man for Livingston as they gave themselves a confidence booster going back into league duty with a 4-1 win over Airdrieonians. The ex-Ayr United winger netted twice.

FC – Stevie May (St Johnstone)
The forward continued his fine Betfred Cup form with a double in a 3-1 away win over Peterhead, taking his total to five goals in the competition thus far.

FC – Liam Buchanan (Alloa Athletic)
This week’s star man comes from the Indodrill as Buchanan inspired a terrific second-half recovery for Peter Grant’s men, who had been trailing 2-0 to Stenhousemuir. The experienced hitman struck his first on 64 minutes and completed his hat-trick 14 minutes later. Steven Hetherington added a fourth goal in injury time to complete the 4-2 win.