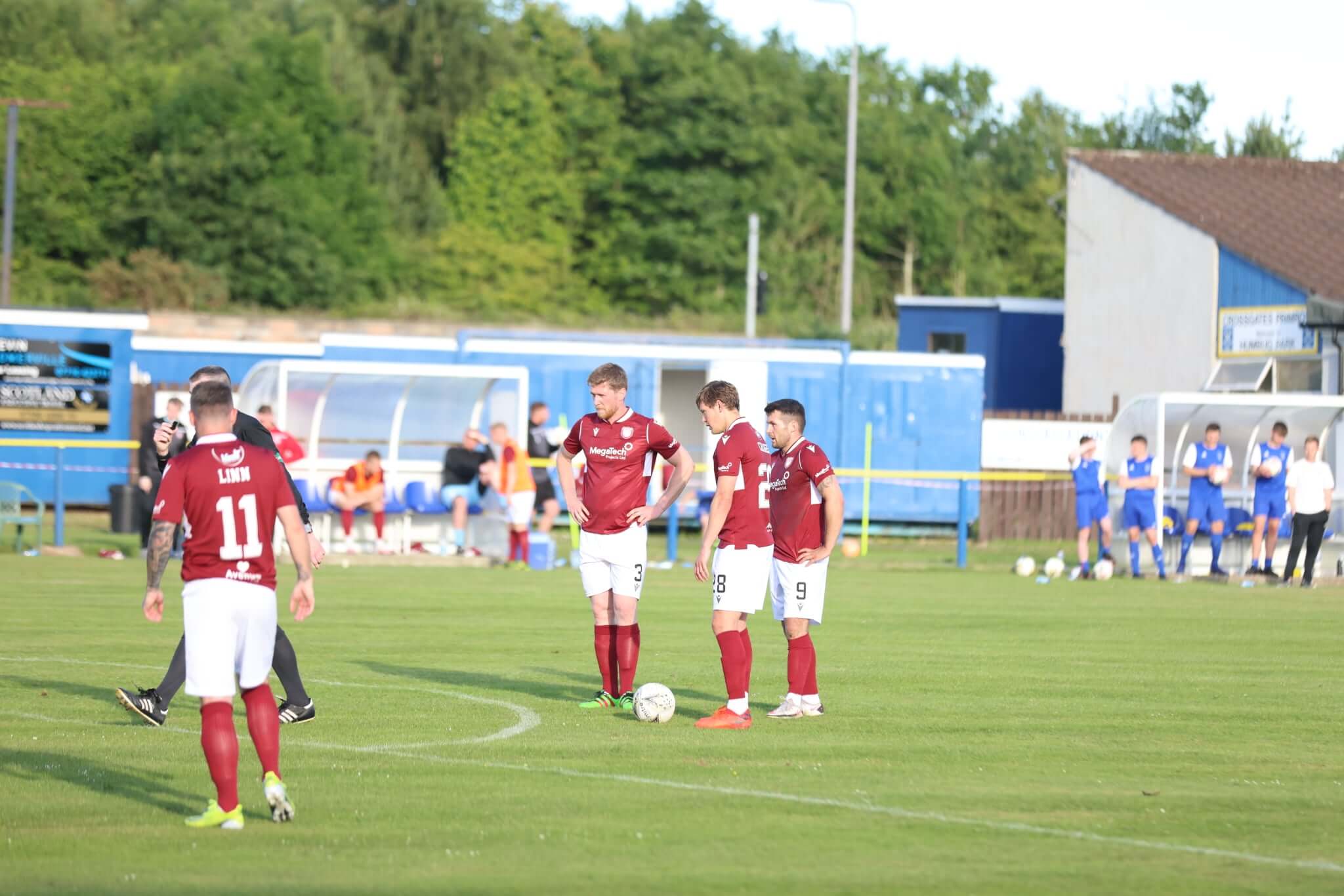 Arbroath made the trip down to Fife last night to take on East of Scotland Premier Division side Crossgates Primrose at a lovely and sunny Humbug Park.

Arbroath received a warm welcome and lovely hospitality from everyone at Crossgates Primrose and it was great to again enjoy a match with supporters in attendance.

Arbroath were without Ricky Little, Calum Antell and Jason Thomson with Manager Dick Campbell ringing the changes with 5 changes to the starting line up as the Lichties lined up in a 3-5-2 formation.

Derek Gaston in goals with Thomas O’Brien, Colin Hamilton and Liam Henderson from right to left across the back, then David Gold, Andrew Osei-Bonsu (T), Gavin Swankie, James Craigen and Bobby Linn across the midfield with Dale Hilson up front with Dylan Paterson playing as a number 10.

Gavin Swankie hit the first shot for the Lichties but his 30 yard volley was high over the bar after just a few minutes, next up a cross from the left from Linn was almost swept into the net by Craigen but the Crossgates Primrose keeper made a vital touch in the 6th minute.

Crossgates Primrose who were well organised won a corner in the 10th minute, but James Craigen was finding his range and had a curling low drive from 20 yards saved in the 11th minute.

From the resulting corner Thomas O’Brien appealed for a penalty as he fell to the floor but as play raced on a cross back into the box was met by Hilson but his header was just wide.

Crossgates Primrose lost their right back to a groin injury in the 14th minute as they were forced to make an early substitution.

Dylan Paterson was showing some lovely touches and used a skilful turn to escape the clutches of a defender.

Liam Henderson tried his luck from distance with a 40 yard strike on the half volley which spun just over the bar in the 25th minute.

A good run down the left wing by the Osei-Bonsu was cut short when he was upended allowing Linn to have a strike on goal but his free kick lacked the power and the Primrose keeper was able to catch the ball on the bounce.

Colin Hamilton should have opened the scoring in the 32nd minute as he was unmarked in the box and met a Bobby Linn corner unchallenged but his powerful header was just over the bar.

Dale Hilson was pulled back on the edge of the D on the 18 yard box, which allowed James Craigen to step up in the 35th minute and he curled a low ball round the wall and into the corner of the net to open the scoring.

Two minutes later and a nice flick from Paterson was met by the Osei-Bonsu who was running in on goal but as he battled the defender the Referee gave a foul to Primrose.

Arbroath rung the chances with trialists Toshney and Brian coming on and replacing O’Brien and Henderson in defence, Donnelly replaced Paterson up front, whilst Linn, Swankie, Craigen were replaced by McKenna, Low and Stewart in midfield.

Nicky Low made an instant impact running through to latch onto a Hilson pass only to be denied by a good save from the Primrose keeper.

Into the 49th minute and a surging 70 yard run up the wing by Stewart seen his cross travel across the box where it was met by McKenna but his shot was blocked for a corner just as it looked like the Lichties were about to grab goal number 2.

In the 52nd minute another Arbroath corner was met by the head of Toshney and his header was just wide of the far post.

McKenna and Stewart were doing well down both wings but Primrose were competing and been throughout with some good tackles and quick passing football to get up the pitch.

Arbroath switched trialists in the 70th minute with Osei-Bonsu coming off and Steward coming on with Steward almost making an instant impact when he met Scott Stewart’s cut back in the box but his shot was well saved by the home keeper who had impressed all match.

The keeper again impressed, this time a ball was laid into the path of Low by Gold and Low’s first time shot was brilliantly saved despite a defender standing in his line of vision.

From the resulting corner by Low the ball was flicked on by a Primrose defender but only into the path of Toshney who showed great composure to aim his header into the far corner and make it 2-0.

A lovely break by Primrose in the 84th minute seen them win a corner kick and in a similar fashion to the Arbroath goal, a flick on seen the ball fall at the back post where Scott Lawrie struck the ball on the volley and into the goal on the angle to pull a goal back.

Suddenly Crossgates Primrose were pushing forward again and won another corner just 60 seconds later as they went look for an equaliser.

In the 88th minute a glancing header by Luke Donnelly from a Low free kick just missed the far post, with David Gold turning and hitting a shot from 18 yards also going wide just 60 second later.

Just as the game entered into injury time Gold threaded the ball through to Donnelly who was fouled and the referee pointed to the spot.

Nicky Low stepped up and sent the keeper the wrong way tucking the ball into his left hand corner.

With the last kick of the ball and deep into injury time the home keeper again pulled off another fantastic save punching the ball away from a David Gold shot.

A wonderful welcome from everyone at Crossgates Primrose was matched by a competitive game on the pitch with their young keeper worthy of the Man of the Match Award. A series of changes from Arbroath and some new formations experimented with it a tough fixture for the Lichties but a great workout and more minutes under their belt.

We would like to thank Crossgates Primrose for their welcome, hospitality and wish them the very best of luck in the coming season.