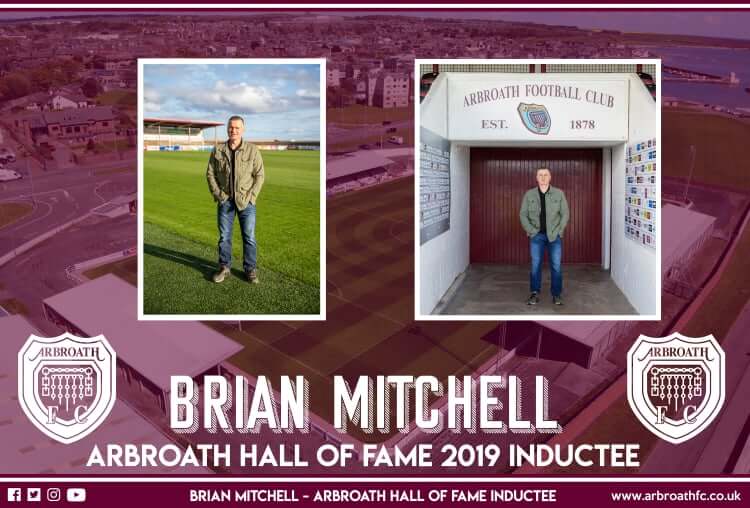 
We are delighted to be holding our 5th annual Hall of Fame Gala Dinner this Friday evening at the Carnoustie Golf Hotel.

Again we thank the supporters of the club who voted for the next three inductees into the Arbroath Hall of Fame and in turn they are recognised as true Lichtie Legends.

We are delighted to announce that our very first 2019 Hall of Fame inductee is former defender Brian Mitchell.

Brian ‘Gubby’ Mitchell came through the ranks of the Arbroath Lads Club and first came to Gayfield as a ball boy with the Lads Club, with Albert Henderson in charge of the Lichties.

Manager Ian Stewart signed Brian on an “S” signing where he played in the Arbroath reserves alongside Mark McWalter at the age of 14.

Brian made his first team debut at the age of 16 under manager George Fleming, and played for many Arbroath managers including Danny McGrain in his 11 year first spell.

A move to Brechin City under John Young followed, before a return to Gayfield in 1997 where he was Dave Baikie’s first signing.

Brian was a member of the Lichties promotion winning squad in 1997/98 under Dave Baikie and made 39 appearances in all competitions that season.

That 1997 / 98 promotion was secured on the very last day of the season at Gayfield against Queen’s Park.

It was such a dramatic season after we had finished the worst team in Scotland only 12 months earlier finishing at the bottom of Division 3.

As a part-time footballer, playing against the Old Firm always was a highlight.  Brian remembers being sent off when the score was 8-1 after pulling down Andy Payton in Arbroath’s record defeat of 9-1 at Gayfield when the sides met in the League Cup.

His memory of coming up against Rangers in the Skol Cup was a better experience.  At 21-years-old, Brian captained the Lichties and was given the task of marking new signing Mo Johnston.   Mo didn’t get on the scoresheet, but a hat-trick by Ally McCoist and an Ian Ferguson secured a 4-0 win for the home side.

He has the 5th most number of appearances by any Arbroath player since World War 2.

Brian remains a ‘popular and weel kent face’ in the town.

We sat down with Brian for a chat last week, and that video will be published next week.


We are absolutely thrilled to be inducting Brian into our Hall of Fame!