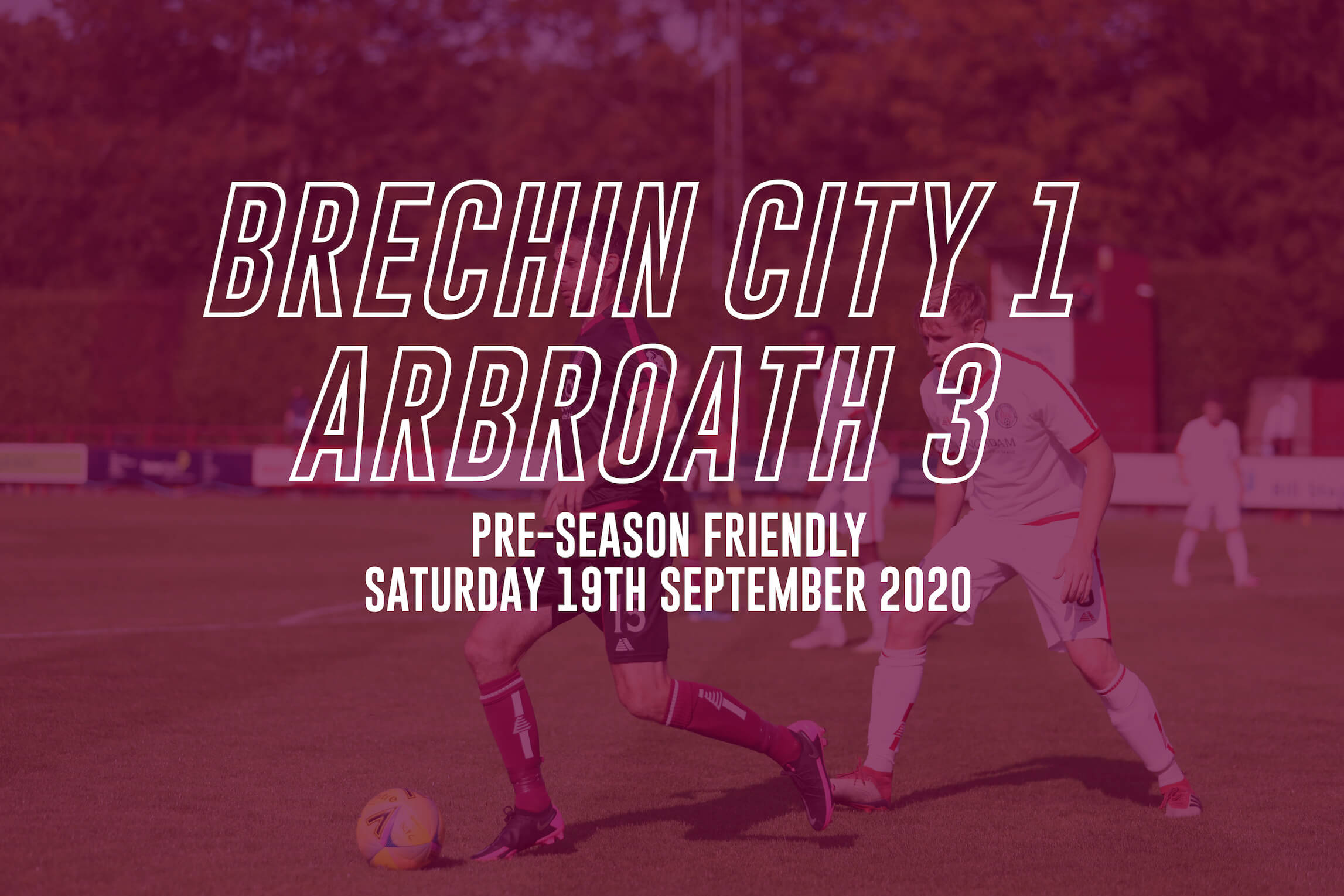 Arbroath made their return to football yesterday for their first stadium match in 196 days as they made the short trip to Glebe Park to take on Brechin City in a pre-season friendly.

Football on the field thankfully remains the same, but the backdrop and preparation off the park is unrecognisable. For the health and safety of not just everyone involved, but the future of the sport as a whole mean strict measures are now in place, with temperature checks, signed surveys whilst hospitality suites are now being used as changing rooms to allow social distancing within the stadium.

These are the changes that a pandemic forces, and whilst it is difficult for every single club out there, especially the part time teams, it is one that we are all uniting against as we will do anything for our beautiful game.

Of course the biggest change is the empty stadium. It is not the same without you, but we have to adhere to these strict rules for the time being. We have to try and overcome these challenging times we all face and hope that very soon we will be able to welcome you back. We fully understand how difficult it is not to see your team in the flesh, but we need to all adhere to these strict guidelines so not to jeopardise the sport and well being of the entire Country.

Whilst the calendar tells us it is September, the weather was indeed like the first game back in a hot end of June as the sun shown down on Glebe Park.

It was a welcome return for the players, many of them who have been together now as a core for several years and we welcomed James Craigen, Kris Doolan, Scott Gallacher, Miko Virtanen and Michael Ruth.

Arbroath lined up with a familiar and experienced back line. Derek Gaston in goals, with Colin Hamilton, Captain Thomas O’Brien, Ricky Little and Jason Thomson all taking up their usual positions with Dale Hilson starting on the left wing, then Miko Virtanen and David Gold as the central pairing and Bobby Linn on the right wing with Kris Doolan and Michael Ruth leading the line in a 4-4-2 formation.

Arbroath took to the field in their old league one away kit (with no squad numbers), which was last worn at Glebe Park when they clinched the League One title as this season’s kit is getting its finishing touches applied.

Arbroath attacked down the Glebe Park pitch in the first half and whilst 6 months had passed it was impossible to tell on the pitch. It took the Lichties no time to get into their passing game with the same energy and movement shown throughout last season.

Brechin were forced into an early change as Connor Coupe was replaced by Scott Cusick in the 4th minute.

Bobby Linn and Dale Hilson on the wings were seeing a lot of the ball early on and linked well with Doolan and Ruth and it was Hilson who created the first chance as he latched on a ball down the left before crossing into the middle with only the outstretched leg of Brechin City keeper Lewis McMinn saving Doolan’s fierce drive.

David Gold and Miko Virtanen were heavily involved throughout as they both challenged to win back the ball at every opportunity.

The tall #19 Trialist striker for Brechin found space to have a shot in the 13th minute, before 2 minutes later was on the ball again and this time forced Gaston into making a save.

Ruth and Doolan were always looking to chase possession and the hunt down the ball putting their bodies on the line which will impress the Arbroath support.

Arbroath should have opened the scoring in the 28th minute after a great run by Bobby Linn who cut back infield before sliding the ball through the defence to Colin Hamilton at the back post who couldn’t find the target with his shot curling away from the front post.

A corner kick on the half hour mark seen Doolan have a goal bound shot blocked by a defender before Brechin’s trialist #15 made an excellent clearing header to deny Jason Thomson from scoring as the ball was played back in.

Bobby was denied by a finger tip save by McMinn in the 31st minute with Hilson doing brilliantly to win back possession of the loose ball before finding David Gold who dribbled into the box and was unfortunate for his shot only to hit the side netting from a tight angle.

Bobby again tried his luck in the 34th minute, but this time curled his shot over the bar from a knock down from Doolan.

The movement up front was really encouraging and all four attackers were linking up really well.

Lewis McMinn denied Michael Ruth his first Arbroath goal with a brilliant tip over the bar as the young Aberdeen loanee charged into the box before unleashing a rasping shot towards the top corner.

The Arbroath chances kept coming and a nice exchange of passes between Linn and Thomson found Doolan on the 18 yard line but his shot was just over the bar in the 37th minute with #15 from Brechin denying Doolan again just moments later with a key block.

Linn again came close, this time running in on goal before cutting back and trying to curl a shot, but this time it was the wrong side of the bar.

Michael Ruth almost connected to a Dale Hilson cross in the 40th minute at the back post but the ball was just out of his reach to connect for a shot.

Despite no goals a very promising first half for the Lichties.

Arbroath made 4 changes with Gavin Swankie, Michael McKenna, Scott Stewart and Luke Donnelly replacing Michael Ruth, Kris Doolan, Bobby Linn and Miko Virtanen whose first half performance was the first game time he has had since overcoming an injury picked up during pre-season.

It didn’t take the Lichties to get back on the attack with Gavin Swankie’s 48th minute corner being met by Scott Stewart whose glancing header was wide of the net.

Thomson and Hamilton were providing support down the wings with Michael McKenna adding the hustle into midfield, Stewart playing down the wing and Swankie linking the play from defence to attack as often as possible.

A mazy surge forward by Donnelly took away the defenders whilst he played in Hilson with a clever pass with the Hilson’s shot just curling away from the post in the 50th minute.

The opening goal did come in the 51st minute. A cross field ball down he left wing was chased by Hilson who played it into the path of Scott Stewart who struck the ball from 18 yards with the ball being deflected into the back of the net by Brechin defender Jonathon Page.

Another run down the wing by Hilson allowed him to cross for Donnelly who found space to shoot but his shot was deflected away for a corner by Brechin’s trialist #15.

In the 56th minute Arbroath made it 2-0. A long kick by Derek Gaston was collected by Gavin Swankie down towards the corner flag. A nice piece of skill before a surging run allowed Swankie to head towards goal before his cross was cleared by Page, only to the feet of Stewart who hit the ball first time finding the far corner of the net to make it 2-0.

The normal composure and accuracy of Colin Hamilton had uncharacteristically deserted him yesterday as a curling cross into the box by Jason Thomson found Hammy but his diving header was wide of the mark.

Brechin made several changes around the 63rd minute and started to see a bit more of the ball. A surging run down the pitch by Cusick almost turned out to be a spectacular goal as he continued his run into the box but was denied a goal by a block from Hamilton.

Jonathon Page and Dave McKay were the stand outs for Brechin with number 3 McKay having a great game.

Brechin did pull a goal back and it came from a corner kick. The ball was whipped towards the back post and then struck high into the air. Derek Gaston made the save but the ball fell back out and Page was first to connect and struck the ball past a sea of players into the net.

There was 10 minutes left on the clock and Arbroath were quick to get the ball pack up the pitch towards the Brechin goal. Another run by Donnelly found Scott in space and his 20 yard strike was well saved by McMinn.

Michael McKenna was next to try his luck with a volley which flew past the far post from 18 yards after a good run forward.

Another attacking few minutes of play had Thomas O’Brien providing a cut back in the Brechin box before a cross from the right wing was met again by Hamilton who just didn’t have the angle to connect the ball towards the goal.

Dale Hilson came close again with a flying header which was just over the bar.

Minutes before the full time whistle Arbroath did get their 3rd goal. A cross field pass to switch play from Michael McKenna found Colin Hamilton in acres of space and he ran down the wing before exchanging passes with Dale Hilson before firing across the box where Luke Donnelly tucked the ball into the back of the net.

A good performance from the Lichties for their first game in 6 months, with very impressive debuts from Ruth and Doolan and the return of Virtanen. We often take for granted how much experience we have in our side and the skilful players on show and it was great to see them all back together on the pitch.

We would like to thank Brechin City for the game and wish them all the very best for the season ahead.