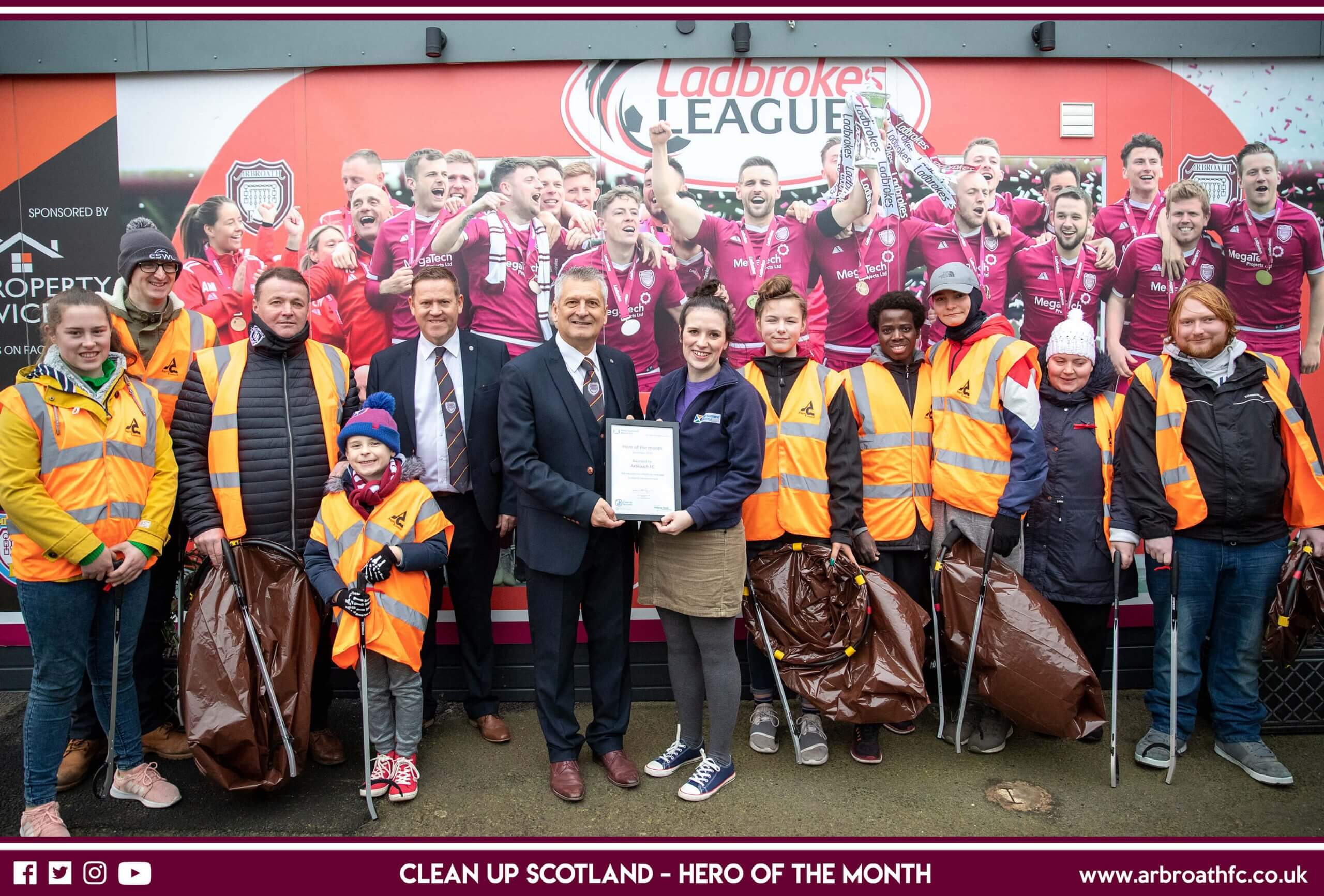 This month we have presented Arbroath Football Club with our ‘Hero of the Month’ award, recognising the club’s success in changing the littering culture at its Gayfield stadium.

Launched last month, the club has been working with local volunteer group, Angus Clean Environments (ACE) to change behaviours and tackle the culture of litter at the stadium and reduce the amount of litter left behind after matches. Due to the stadium’s proximity to the coast, litter dropped at the stadium risks damaging the marine environment.

Encouraging spectators to bin, rather than drop, their litter, the club’s new ‘Litter Champions’ scheme appoints volunteers who then encourage supporters to use the bins and pick up litter for free match tickets. Additionally, they have reassessed their bin infrastructure and installed more bins on the grounds to make it easier for fans to clean up after themselves.

To date 10 volunteers have been helping out every week at recent games. So far, the initiative has helped to remove more than eight bags of litter from the stadium per match.

With 80% of marine litter originating on land, the club’s initiative goes a long way to address the impact that litter dropped in public arenas can have on the sea and marine wildlife.

“The club is committed to helping to improve the environment while strengthening its links with its supporters and the community.

“Thanks to the help of our volunteers we have managed to remove all of the litter left behind after matches and supporters have been using the bins even more. We hope that this success is reflected in our performance this season.”

With more matches set to take place this season, the club is encouraging people to continue signing up to be their Litter Champions by emailing angusisace@gmail.com.

Heather McLaughin, our Campaign Officer who presented the award before the game on Saturday, commented:

“This initiative by Arbroath Football Club is a fantastic example of how significant change can be implemented if you get everyone on board. By engaging spectators, supporters and the community, the club has managed to significantly reduce the amount of litter in the stadium, and, in doing so, has helped to minimise the amount of litter entering the sea.

“I hope that the new Litter Champions manage to encourage everyone to think about their own littering behaviours, take responsibility for their actions and dispose of their rubbish appropriately.”

The initiative arose out of the Arbroath Harbour project which aims to reduce the amount of litter and plastics escaping into the sea at Arbroath. Gayfield lies adjacent to the coast and litter was escaping from the terraces and out into the marine environment.

“ACE volunteers have been overwhelmed with the support of fans who have told us that they want to do the right thing with their litter at public venues. The expectation that fans should simply drop their litter is both damaging to the environment and to the education of children who appear confused by the mixed messages that this behaviour presents. ACE are calling on the Scottish Football Association to support other clubs to consider a litter strategy and follow where Arbroath have led”.

If you know a group or individual who deserve recognition for the work they do in their community to keep Scotland beautiful, get in touch.