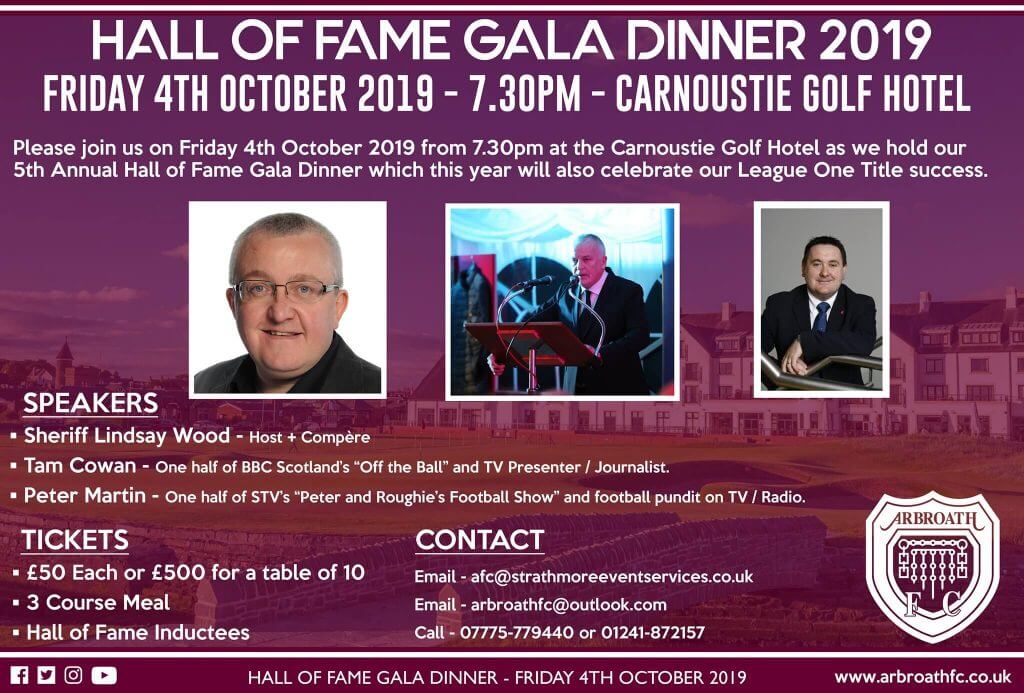 As a club we have already celebrated 4 wonderful Gala Dinners in which we have toasted those famous Lichties who are now forever named in our Hall of Fame.

This year will be no different as more legends are inducted whilst we also celebrate the amazing achievement of our League One Title winning team.

Please joins us for an evening where you will be able to rub shoulders with former Arbroath FC players and managers whilst also enjoying a fantastic 3 course meal before being treated to first class entertainment.

Returning to be our host and compère for the evening will be good friend of the club, Sheriff Lindsay Wood.

He will be joined with special guests Tam Cowan and Peter Martin with several former “Lichtie Legends” also in attendance.

Tam Cowan needs no introduction to football supporters as he is one half of BBC Radio Scotland’s Off the Ball. A life long Motherwell supporter, television presenter and newspaper columnist Tam always has a story to tell and we can’t wait to welcome him to Carnoustie.

Also joining us is Peter Martin, who is another famous TV, radio and football pundit who is best known for being one half of “Peter and Roughie’s Football Show” on STV.

Peter regularly compères the annual Scottish PFA Awards and knows Arbroath FC well, having welcomed Bobby Linn to the stage to collect his PFA League One Player of the Year award in May.

The newest Hall of Fame inductees will be announced after being voted in by the supporters from an online poll.

Thank you again for your support and we looking forward to celebrating with you again in October.