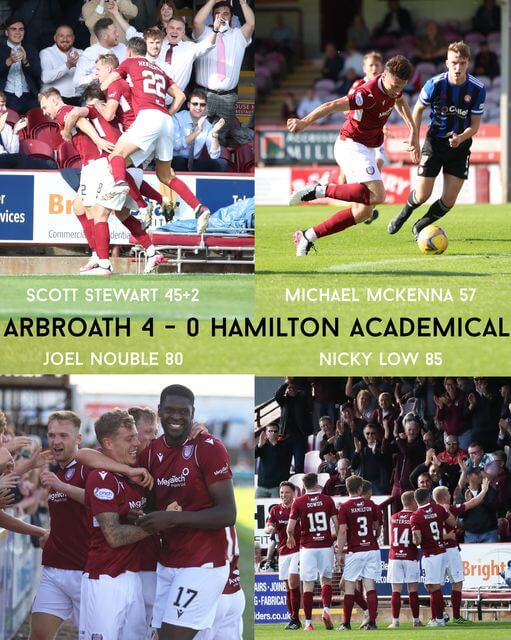 Arbroath welcomed Hamilton Academical to Gayfield on Saturday for their first league meeting since 2004.

Despite making several changes in their playing staff, Hamilton Accies had been playing their football in recent seasons in the Scottish Premiership and are hotly tipped to be battling for the Championship title alongside Kilmarnock.

Ex Lichties Scott Martin and Miko Virtanen were absent, with Andy Ryan starting and Ben Stirling on the bench.

As expected Arbroath Manager Dick Campbell made 8 changes from the side that played at Pittodrie and kept faith with the team that had defeated Partick Thistle and Dunfermline Athletic.

There was a return to the bench for Dylan Paterson and Harrison Clark and with Calum Antell having to pull out just before the match, Jason Thomson was listed as the reserve goalkeeper.

In a now established 4-4-2 the Lichties lined up with Gaston in goal, then from right to left – Gold, Little, O’Brien and Hamilton, then Stewart, Low, Henderson and Craigen with McKenna and Nouble up top with Hilson, Linn, Paterson, Donnelly, Clark, Dowds and Thomson giving Arbroath a very strong bench.

Arbroath attacked the pleasureland in the first half in their traditional maroon kit whilst Hamilton played in their blue and black away kit on a very warm late summer’s afternoon.

Much of the opening minutes seen both sides trying to work each other out with the first moment of excitement when a long ball over the top from Accies allowed Andy Ryan to chase but both Ricky Little and Thomas O’Brien ganged up on Ryan and Little got the touch to put the ball out for a corner kick.

A foul on Marley Redfern by Liam Henderson gave Accies a good opportunity 25 yards from goal but Josh Mullin’s free kick was poor and landed in the back row of the away support behind the goal.

Michael McKenna latched on to a Colin Hamilton free kick in the 10th minute allowing the ball to bounce and run across his body before turning to shoot but it was straight into the arms of Ryan Fulton.

Liam Henderson was cautioned in the 12th minute which seemed a harsh decision.

Mullin had a better attempt at goal after his free kick, but his 12th minute shot was a routine save for Derek Gaston.

Henderson found Scott Stewart 60 yards from goal and after a few touches he struck at goal but there wasn’t enough power and Fulton got down low to comfortably save the ball in the 17th minute.

Redfern had a great chance in the 23rd minute but his shot from only 6 yards out was high over the bar.

A dazzling run by Nouble down the Arbroath left wing before cutting into the box set up Stewart but his shot from 12 yards just didn’t have enough power to beat Fulton who got down and got his gloves to the ball.

Arbroath rode their luck after a long throw into the box in the 43rd minute wasn’t cleared and fell to Redfern who hit a stunning overhead kick but his shot hit off the post before Colin Hamilton chested the loose ball into the arms of Gaston.

With the first half sliding into added time, a wonderful cross from Nicky Low was met by Fulton who came rushing from his line. Unfortunately for him he couldn’t catch the ball and it fell to Scott Stewart who showed great composure to fire the ball into the crowded net from 16 yards to give Arbroath a crucial lead going into half time!

The goal had really lifted Stewart and as the second half got underway he just seemed to really have lifted his game and a surging run down the right wing in the 53rd minute seen him leave Reegan Mimnaugh in a spin as he cut outside and then inside before unleashing a drive at goal which Fulton could only palm away, as the ball came back in to the box it fell to McKenna who hit a shot from 12 yards but Fulton was able to save this one.

Just 4 minutes later and Joel Nouble found Stewart with a beautiful pass, it was then the pace of Stewart which allowed him to catch the ball before pulling the ball into the box where great movement from Michael McKenna allowed him to beat two defenders to the ball. A little stumble wasn’t enough to stop McKenna who quickly picked himself back up and fired into the net from the angle to net his 6th goal in 5 games. A sensational return for the Arbroath midfielder.

Arbroath were hungry for more and a corner kick by James Craigen in the 59th minute fell to Thomas O’Brien at the back post and his right footed volley had to be palmed over the cross bar by Fulton for another Arbroath corner.

Josh Mullin fired a weak shot from 20 yards but it went harmlessly past the far post on the hour mark with James Craigen trying his luck from the same distance at the other end but his shot did require Fulton to get down low and make the save.

Hamilton made a double change in the 67th minute with Lewis Smith and Adam McGowan coming on for Marley Redfern and Kyle Munro.

Although for the Accies their afternoon was to go from bad to worse. A driving run forward by Jamie Hamilton seen his eventual shot blocked, and as the ball was picked up by Arbroath’s Scott Stewart, Hamilton slid in hard but with both feet in the air and both sets of studs showing and catching Stewart and more importantly under the nose of Referee Greg Aitken who showed no hesitation than showing Hamilton a straight red card.

With a defender short, Hamilton made their final change with on loan Hearts defender Mihai Popescu replacing Reegan Mimnaugh in the 74th minute with Arbroath making their first change a minute later as Dylan Paterson replaced Liam Henderson.

As more space opened up, it allowed the pace of Stewart to really test the Accies defence and in the 80th minute he won the ball off Lewis Spence before running at goal. As he pulled away 4 defenders he played a beautiful blind pass into Joel Nouble who let the ball roll past Fulton who had dived out, before calmly slotting the ball into the empty net to make it 3-0 to Arbroath!

Arbroath made their final changes with Nouble and David Gold going off to a standing ovation, it was the attacking duo of Dale Hilson and Anton Dowds who came on.

Adam McGown slipped through the Arbroath defence in the 85th minute but Scott Stewart was also tracking back and cleared McGowan’s shot off the line and out for a corner kick.

Popescu fouled James Craigen some 30 yards out from goal and as McKenna, Hilson, Craigen and Hamilton all stood over the ball it was left for Nicky Low.

Nicky Low hit a stunning left foot shot curling over the wall and into the right hand side of the net leaving Fulton no chance as he made it 4-0 before running over to celebrate in front of his family in the main stand.

nton Dowds and Dale Hilson combined in the final minute but Dowd’s shot was finally blocked, with McGowan firing a header wide in injury time before the referee blew for full time.

It is hard to find words for this Arbroath team who have thumped 3 of the favoured teams for promotion in quick succession scoring 10 goals and only having conceded one goal in return, pushing them up to 3rd in the league and with the best goals for. Incredible.

The team are poised and calm and keep working for one another with some stand out individual performances but with all players fighting together. It is hard right now for those not in the first eleven, but it is a long season and every player will play a crucial role in the games to come.