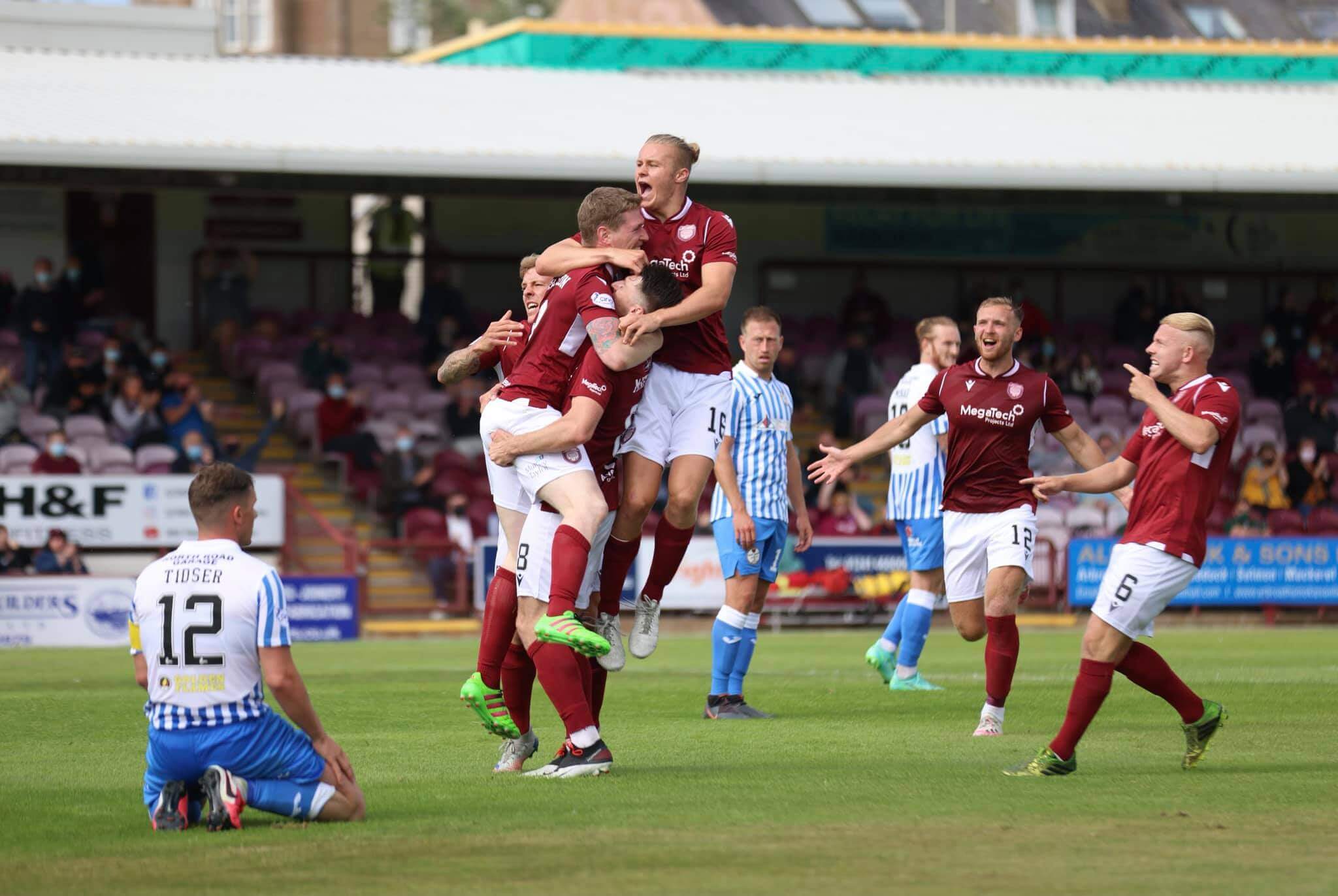 Arbroath made it through to the 2nd of the Premier Sports Cup after coming back from 2 goals down to win 3-2 which was enough to finish second in Group B and the 2nd best runner up of all 8 groups.

It was the first competitive meeting between Arbroath and Kelty Hearts and the side from Fife came to Gayfield with a heavily experienced squad with many of their players having been regulars in the Scottish Championship and above and included our League One Winning goalkeeper, Darren Jamieson.

Arbroath were without James Craigen, Jason Thomson and Thomas O’Brien but welcomed Chris Hamilton into the squad.

It was a 4-4-2 formation, with Gaston in goals, then right to left of Stewart, Little, Henderson and Colin Hamilton, with McKenna, Clark, Low and Linn with Donnelly and Hilson up front.

Arbroath attacked the Harbour end in the first half and once again Gayfield had a small amount of supporters cheering on both sides which was great to see.

Arbroath almost made the perfect start as Michael McKenna pounced onto a loose ball before passing to Bobby Linn who laid the ball into the path of the overlapping McKenna but his right foot strike was just wide of Jamieson’s post.

Kelty’s had a header over the Arbroath bar in the 6th minute as former Forfar Athletic player Thomas Reilly connected to a cross from the wing.

There was a small stramash in the Kelty 6 yard box in the 11th minute with a cross from Scott Stewart was attacked by Dale Hilson and then Luke Donnelly but on both occasion a Kelty defender managed to make a block.

Nathan Austin had a strike on goal after a clever ball over the top, but the former East Fife striker didn’t get a true connection and it was an easy collection for Gaston.

Arbroath were denied by former keeper Jamieson twice in the 16th minute, hesitation by Robbie McNab allowed Hilson to grab the ball but Jamieson came out to smother before the ball fell back to Hilson but Jamieson did well to dive down before Jordon Forster cleared the danger.

Kelty took the lead against the run of play in the 20th minute as a corner kick wasn’t dealt with and was played back into the box, Scott Stewart headed clear but his shot fell to Kallum Higginbotham and his shot flew through the legs of Stewart before hitting the far post and into the back of the net.

Unbelievably Kelty Hearts doubled their lead in the 27th minute. Dale Hilson passed the ball to Colin Hamilton, who was under pressure from a defender, his pass back was caught by Higginbotham who fed in Joe Cardle who beat the offside trap and calmly slotted under Gaston.

However the lead didn’t last long as Nicky Low played a lovely pass down the wing to find Colin Hamilton who had raced forward, but Kelty defender Andrew Black tried to head the ball clear but he actually played the perfect ball into the path of Luke Donnelly who headed the ball over Jamieson and into the corner of the net on the half hour mark for his 3rd goal in 4 games!

The goal lifted Arbroath and 3 minutes later a free kick by Low fell to Liam Henderson who showed a great touch before swivelling and hitting a shot on the volley which just flashed past the near post.

A minute later and a wonderful, tempting ball from Bobby Linn was a hairs length of the head of Michael McKenna who flew through the air with a diving header, just a whisker away from equalising.

Arbroath were hitting Kelty with wave after wave of attack and a beautiful pass from the outside of his boot by Dale Hilson found Michael McKenna in space and he had spotted Linn was free at the far post. A clever lob fell to the feet of Linn who took a touch before striking at goal but was denied by a sliding block by Forster.

There was one final chance for Arbroath in first half injury time. Luke Donnelly chased down the ball to the byline and his cut back was hit by Scott Stewart whose shot was saved by the face of Jamieson.

Arbroath made a change at half time as David Gold replaced Dale Hilson and took up and advanced position on the right wing.

Right from kick off Arbroath showed their intent, with Harrison Clark picking up Bobby Linn who showed equisite skill to beat his man before crossing into the box.

It was Linn who was involved in the Arbroath equaliser as he ran in from the wing he was taken down by Higginbotham in the 52nd minute 30 yards from goal.

Linn was still on the ground, with the Kelty Hearts players still trying to organise a wall when Nicky Low spotted the run of Colin Hamilton as he sprung a quick free kick taking everyone by surprise but not Hamilton who fired in a vicious strike from the tightest of angles to pull Arbroath level.

In the 56th minute Low put a ball over the top for Donnelly, a mistake from McNab allowed Donnelly to race in on goal, but his pass to McKenna was blocked by Peggie then Forster but as the ball broke Donnelly and Gold chased and Donnelly was caught by substitute Jamie Barjonas with Referee Duncan Williams pointing to the spot.

In the after math Kelty Hears Captain Michael Tidser was booked for sarcastically applauding the referee.

Nicky Low stepped up and made no mistake as he sent Jamieson the wrong way as he struck the ball to his left high and with power.

Low was having a great afternoon and hit a spinning half volley from 20 yards which Jamieson had to save. The former Aberdeen and Dundee midfielder has really brought something special to the Arbroath team and looks to be really enjoying his football too.

Another Low free kick was this time met by the head of Colin Hamilton but his header in the 65th minute was directly at Jamieson in goal.

Arbroath made their second change in the 68th minute as Joel Nouble replaced Luke Donnelly. It was another good game by Donnelly whose opening goal was crucial in Arbroath’s come back.

Kelty won a corner in the 71st minute when Jamie Barjonas found space on the byeline but his drive across was blocked by Gaston for a corner kick.

Gavin Swankie came on for Bobby Linn in the 75th minute with Chris Hamilton replacing Scott Stewart in the 80th minute.

Stewart had put in another tremendous with Chris Hamilton coming on to replace him at right back.

With one minute of regular time remaining Gavin Swankie was shown a yellow card as he tripped Forster who looked like he was about to launch a counter attack, it was a yellow card, but it was one for the team and stopped the Kelty Hearts attack.

With the game into injury time, Harrison Clark showed great determination as he robbed Kelty Captain Michael Tidser 50 yards from goal before running forward, joined in attack by Nouble he passed the ball into the path of his fellow Englishman and Nouble was so unlucky as his right footed shot beat Jamieson but was just on the wrong side of the post.

The final whistle finally blew and with 3 wins out of 4, Arbroath sealed their place in the last 16 with 9 points.

There was the real chance of an upset but once Arbroath started to play it was nearly all one way traffic. Kelty Hearts have shown their hunger and desire and with a squad of talented, experienced footballers and a talented young Manager it is clear to see they will do very well in League 2.

Arbroath will be happy with the amount of chances created and how quickly some of the new signings have easily integrated into the team.

With Craigen, Thomson and O’Brien all still to come back and with Dick still trying to bring in forward players there is real depth to this Arbroath squad.