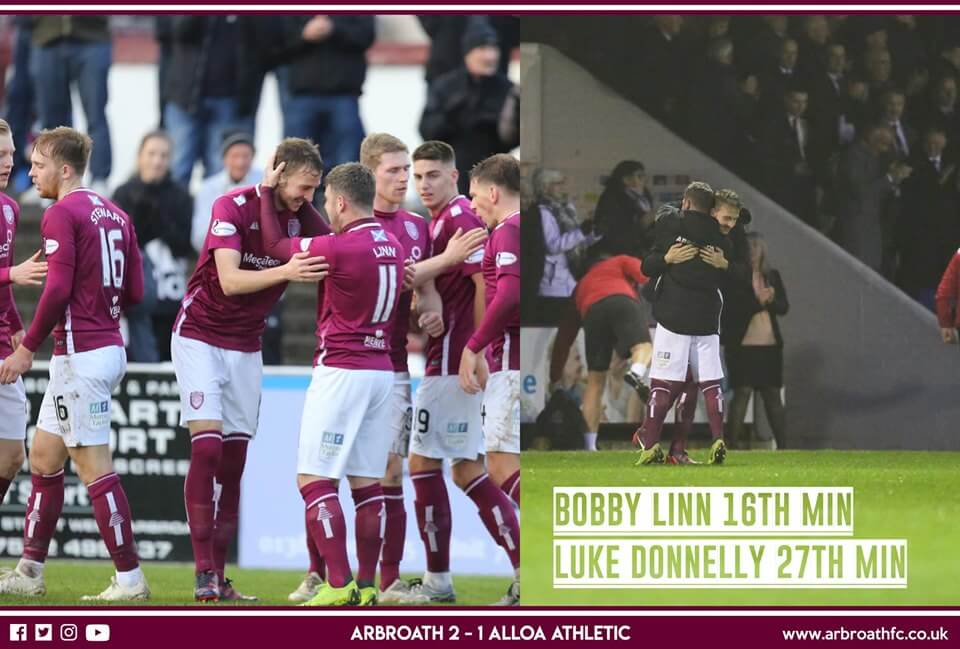 Arbroath made it 3 wins in 4 games this afternoon thanks to first half goals from Bobby Linn and Luke Donnelly.

Arbroath Manager Dick Campbell reverted back to the team that defeated Partick Thistle minus Jason Thomson who faces a few weeks out through injury with Ben Stirling coming in to take his position at right back.

The Lichties made a strong start with Luke Donnelly coming close after only 3 minutes as his header from a corner kick just went wide and as Alloa started every move deep it allowed the Arbroath midfielders to push forward and harass with David Gold chasing after every ball.

The movement and passing from Arbroath was very impressive and Luke Donnelly played in a perfect ball to Bobby Linn in the box after 16 minutes allowing Linn to close down on Jamie MacDonald before firing finding the back of the net to make it 1-0.

Derek Gaston pulled off the save of the game as he somehow denied Robbie Deas pushing his downward header over the bar for a crucial save.

Ricky Little came close with a header from another corner after 25 minutes and 2 minutes later Arbroath made it 2-0.

Miko Virtanen found Linn out on the win and this time Bobby provided the assist in a carbon copy of last Saturday’s goal. Bobby closed in on goal before looking up and placing the ball into the path of Luke Donnelly who smashed the ball past MacDonald.

Although just as it looked like Arbroath were going to have a convincing win, Alloa came right back into it with Alan Trouten netting at the back post after being set up by Kevin O’Hara.

Alloa’s passing was sharp and precise and the first half showed a great attacking display by the two part-time sides in the division.

As the second half started Bobby Linn continued his excellent form and truly was unplayable at times during the afternoon as every time he got on the ball there was a threat a goal was going to come as Alloa just couldn’t near him.

Bobby had a shot blocked in the 52nd minute before David Gold came close with a chip which just sailed past the wrong side of the post.

Alloa always carried a threat on the break and Derek Gaston made a save from Steven Hetherington on the hour mark.

Bobby again came close in the 65th minute with MacDonald making a save before substitute Greig Spence and Gold came close again.

Alloa’s Jon Robertson should have pulled Alloa level but he blazed a great opportunity over the bar from 6 yards out.

David Gold and substitute Michael McKenna fired shots just past the posts with Referee Graham Beaton giving many Arbroath fans no finger nails as the full time whistle seemed an age in coming.

In the end the Lichties held on for another fantastic win consolidating 5th place in the league. Another excellent team performance with Donnelly and Linn continuing to work really well together with Virtanen, Gold and Whatley breaking up play in midfield. A great performance from Stirling who slotted seamlessly into the back four.

Arbroath Manager Dick Campbell doesn’t often single out any of his players but did give Linn full credit for his performance today.

We hope to see you all back at Gayfield next Saturday!