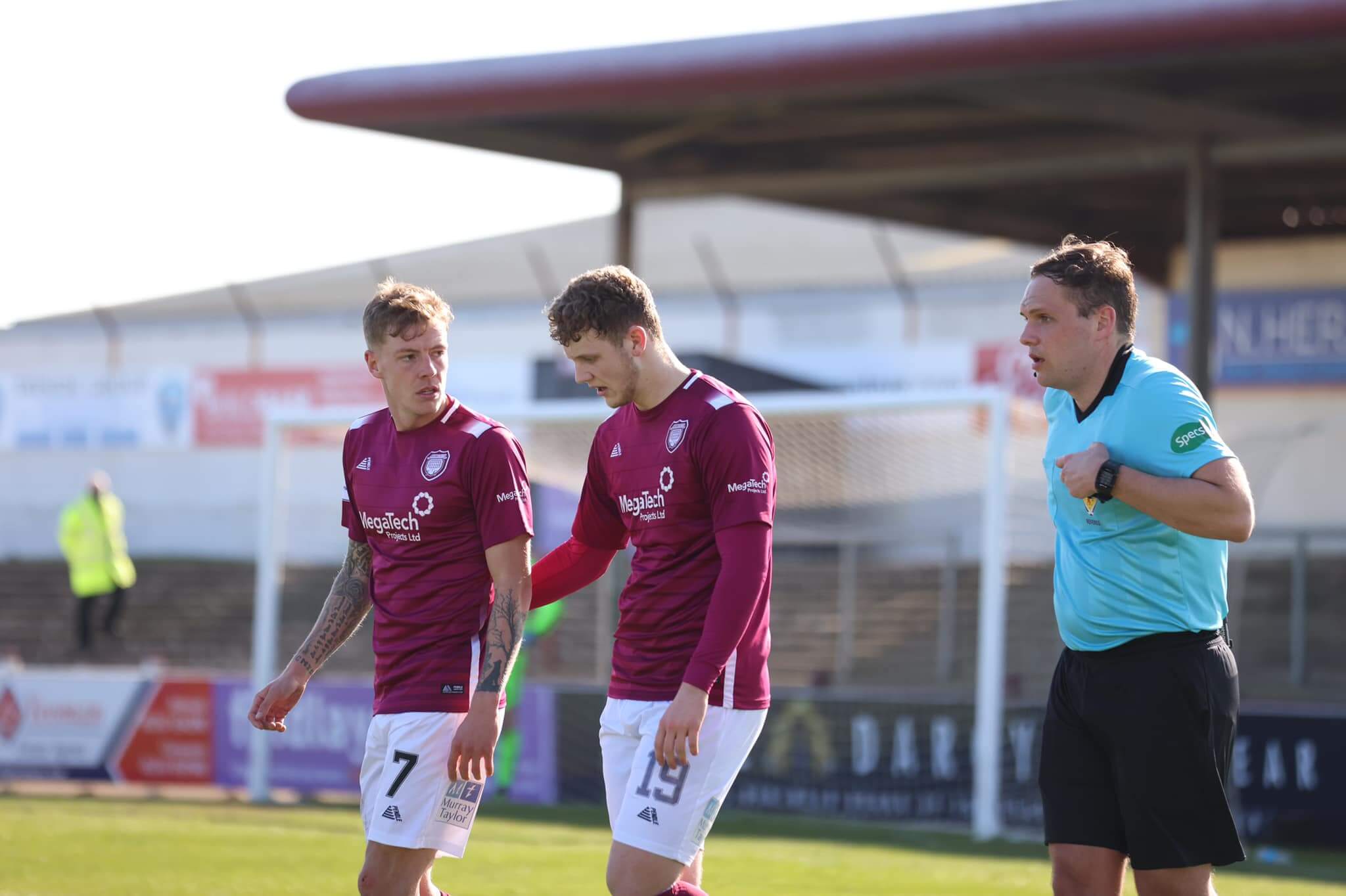 Arbroath defeated fellow part-timers Alloa Athletic at Gayfield on Saturday and in the process opened up a 7 point gap over the bottom placed Wasps.

Arbroath needed the 3 points and the team selection was set up for attack as Dick Campbell gave loan signing Nicky Low his first full start in the centre of midfield whilst Jason Thomson returned at right back after a month out.

On a stunning spring afternoon Arbroath should have opened the scoring after just 3 minutes when youngster Ben Williamson showed great skill to control the ball before stepping inside and laying the ball into the path of Kris Doolan whose side footed shot from 12 yards was agonisingly just wide of Neil Parry’s Alloa goal.

Alloa have long been Arbroath’s bogey team and with a wealth of experience in their ranks they were soon knocking on Arbroath’s door as Jon Robertson hit the side netting after a neat touch set up a crisp volley from 18 yards.

Nicky Low was impressing on his full debut and his corner kick in the 10th minute was met by Jason Thomson but the defender couldn’t get full connection and his header flashed wide.

Colin Hamilton and Lewis Moore were combing well down the Arbroath left and in the 19th minute Moore nutmegged Kevin Cawley as he turned into the box before unleashing a vicious shot which Parry did well to hold at the second attempt.

In the 21st minute a long throw in from Thomas O’Brien landed in the 6 yard box and as the ball broke, David Gold went to head the ball but was kicked in the head by Alloa’s Lucas Williamson. Referee Chris Graham gave an indirect free kick but Kris Doolan’s strike was blocked by the Alloa Wall.

With 4 minutes remaining in the first half a clever ball over the top from Thomson let Gold escape down the wing and his whipped in cross was punched away by Parry as it flashed dangerously across the goal.

There were no changes at the break but the Arbroath players must have been encouraged from their team talk as it took only 43 seconds for Jack Hamilton to latch on to a Gold pass and just fire over from 7 yards.

Arbroath kept pushing and David Gold, who was involved in every move was terribly unfortunate just 2 minutes later as he used his initiative to try and hook a shot over his shoulder after connecting to a long pass from O’Brien but despite beating Parry, Gold’s shot hit the post before spinning out for a goal kick.

Alloa were always a threat and they too came within an inch of netting just seconds later but Trouten’s angled shot was just on the wrong side of the far post.

In a near identical shot and move Trouten missed again 4 minutes later as he beat the offside trap but couldn’t find the angle to turn in the pass from Ray Grant.

The second half really was end to end with Arbroath winning a free kick on the edge of the box in the 54th minute for an Alloa handball. Nicky Low took responsibility and his free kick was spilled by Parry before being cleared in a scramble.

However Low would turn architect just 4 minutes later. He picked up the ball before beating his man then as he raced forward he slid the ball into the path of Jack Hamilton who took a touch then fired the ball through the legs of Parry to open the scoring.

Yet for Arbroath, as in recent weeks they were unable to hold onto the lead and Alloa equalised in the 63rd minute with a stunning goal.

Kevin Cawley picked out Jon Robertson in the Arbroath box and he headed across the goal to find Trouten who did finally get his goal from 7 yards out and pulled his side right back into the game.

It was clear what was at stake for both clubs as neither side was ready to taste defeat.

Jack Hamilton almost got on the scoresheet again in the 70th minute when he got on the end of a great long pass from Gold as he ran into the box showing great pace and strength to hold off the defender but Parry had narrowed the angle and knocked the ball out for a corner with his legs.

Arbroath Manager Dick Campbell played his hand when he made a triple substitution in the 72nd minute. Michael McKenna, James Craigen and Dale Hilson came on for Moore, Low and Doolan.

Hamilton had been a real threat for Arbroath and was once again thwarted by Parry in the 78th minute. Another long throw in from O’Brien created a scramble in the box with the ball zipping off heads like a pin ball before falling to whose shot forced Parry into a low diving save to push it round his post.

With only 9 minutes remaining Kevin Cawley forced Arbroath keeper Derek Gaston into a diving save but his 25 yard strike was just wide.

Arbroath’s pressing finally paid off in the 83rd minute when substitutes McKenna and Hilson combined to allow Hilson to cross into the box and David Gold was quickest to the ball poking into the net just before Parry could get his gloves on it. It was truly deserved for Gold who had been the stand out for Arbroath.

Arbroath survived a panic in the 85th minute as an Alloa corner seen the ball drop into the box before several players all tried to get a shot on goal but the ball finally broke and McKenna was able to clear the danger.

The final whistle brought joy for Arbroath but despair for Alloa Athletic. Players from both sides looked drained at the end with many falling to their knees but there was a great respect for one another in the moments that followed with both teams acknowledging one another.

The win means the Lichties now sit level with Greenock Morton on 25 points, with Ayr United just a point better off on 26 in 7th place.

Whilst those two clubs have a game in hand, they both have to visit Gayfield before the end of the season.