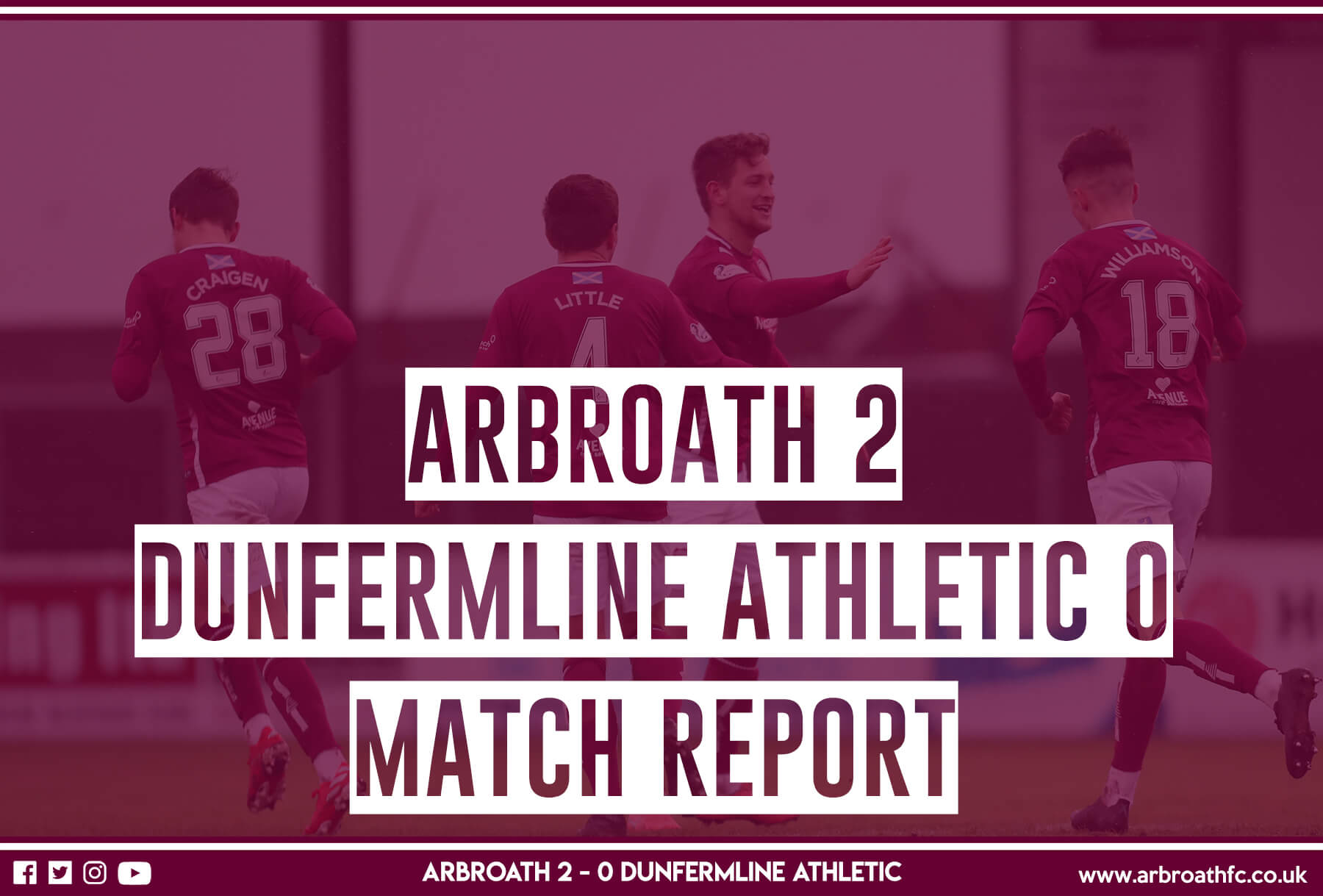 Arbroath capped a fantastic week recording a 2-0 victory over 2nd placed Dunfermline Athletic at Gayfield on Saturday to record 7 points out of a possible 9 in a busy 7 days.

Arbroath were dealt a blow before the match was even started with Gavin Swankie look set for a spell on the sidelines with a broken foot, with left back Colin Hamilton injured and his possible replacement Jake Davidson also out for a few weeks.

Dick Campbell brought in winger Scott Stewart to his defence as he slid into the right back position with Jason Thomson making the switch over the left back role in Hamilton’s absence.

As Storm Darcy approached the UK mainland Gayfield was its normal windy winter self with Arbroath once again kicking off the first half with the wind at their backs as they attacked the pleasureland end.

However it was Dunfermline who were first to threaten as Celtic loanee Kerr McInroy picked out Kevin O’Hara whose tested the gloves of Derek Gaston within the first minute.

It would be a rare threat for Dunfermline in the first half as Arbroath soon started to use the weather to their advantage. Former Dunfermline Athletic Player of the Year James Craigen was first to try his luck but his 20 yard strike in the 5 minutes flew past Welsh Internationalist Owain Fôn Williams far post.

Left back for the day Jason Thomson was next up for Arbroath but his strike was saved by Fôn Williams in the 8th minute.

The conditions were tough, but Arbroath seemed up for the fight and it wasn’t long before Fôn Williams had to be alert. A free kick out on the left wing seemed perfect for crossing into the box, but Bobby Linn had other ideas and smashed a dipping shot at goal which Fôn Williams did brilliantly to tip over for a corner kick in the 11th minute.

Owain Fôn Williams makes a spectacular save from a Bobby Linn free-kick.

Two minutes later and Linn was taking the shoot on sight policy and lashed another drive, this time just flying over the cross bar. Jack Hamilton was looking for his 3rd goal in as many matches but his shot was blocked in the 16th minute.

Arbroath were getting closer and Dale Hilson did brilliant to carve out some space but his shot in the 24th minute was terribly unfortunate as he watched it bounce back off the post.

Dale Hilson is unlucky as he carves out an opening only to see his shot strike the post and bounce back out.

Arbroath didn’t have to wait long though to break the deadlock. A poor clearance by the Dunfermline defence fell into open play about 30 yards from goal and Arbroath Captain was first to the ball lashing a thunderous shot which was flying towards the top corner, but unfortunately for Dunfermline the ball hit their Captain Euan Murray first and ricochet into the net leaving Fôn Williams with no chance.

A 30 yard rocket from Captain Thomas O’Brien takes a deflection off Euan Murray and flies into the net to give Arbroath the opening goal in the 27th minute.

Arbroath knew they would need more than just one goal with Dunfermline having the advantage in the second half so they kept coming. Bobby Linn tested the Dunfermline defence with two in swinging corners in the 30th and 32nd minute with James Craigen having a shot blocked in the follow up.

The second goal did come and it was Linn who was the architect once again. The ball fell out to the Arbroath winger on the left wing and with a few yards of space he left fly from 35 yards out. The ball dipped and curled towards goal and as Fôn Williams dived the ball smashed off the post and back into the 6 yard box where Dale Hilson was there to calmly slot the ball into the empty net and double his sides lead.

Arbroath made a tactical change during the interval with Bobby Linn being replaced by David Gold who would add more support to the defence.

With Wednesday night probably still fresh on their mind Arbroath knew they had to avoid conceding an early goal to have any chance of getting something out of the game and they were let off the hook when O’Hara hit the post in the 49th minute.

The Arbroath players looked ready for battle, they were first to every ball and when they didn’t have the ball they were chasing the Dunfermline players. Every maroon shirt now soaked and covered in mud, they were in the mood.

Derek Gaston was working hard, but he wasn’t particularly being tested. He saved from Declan McManus in the 54th minute, then had to be alert as he pushed a McInroy shot out for a corner in the 57h minute.

Derek Gaston saves a Kerr McInroy shot in the 59th minute to keep Arbroath in the game.

Jack Hamilton’s arrival has been the boost Arbroath needed up front and the tall striker was unlucky in the 61st minute when he showed great strength to get the best of Murray as they both rushed into the box only to see his shot on goal blocked by Murray’s trailing leg.

Stevie Crawford brought on striker Lewis McCann in the 68th minute for defender Lewis Mayo to try and grab a goal but Arbroath’s work rate were really cutting down any opportunity.

Luke Donnelly replaced Hamilton in the 70th minute with Fraser Murray shooting over the bar 4 minutes later as time started to run out.

If you were to look up the word stramash in the Dictionary, the next attempt at goal would be a prime example. There seemed to be a chance O’Hara was about to turn and shoot as Gaston dived to try and grab the ball but within seconds 5 Arbroath players were at his feet and Arbroath kept their clean sheet as the ball made it somehow into the gloves of Gaston.

Stramash in the box and 5 Arbroath players in on the ball and protecting Gaston.

In the 78th minute a foul by James Craigen on McCann have the Pars a great area to score from the free kick but Fraser Murray’s shot didn’t trouble Gaston with Declan McManus being flagged for offside.

Scott Banks came on for Aaron Comrie in the 77th minute, with Mark Whatley replacing Dale Hilson for Arbroath’s last chance as Arbroath flooded their midfield to try and keep Dunfermline at bay.

As the time ticked away O’Hara met a corner kick but his header was straight into the gloves of Gaston in the 86th minute.

Paul Watson was booked for a late tackle on Michael McKenna as Arbroath broke on the counter. It was the last real incident of the match as Arbroath held on for their 2nd win in a week.

The weather takes the blame for many things, but both sides had the same exact conditions for their advantage and disadvantage and it just seemed that Arbroath were up for the fight from the very start.