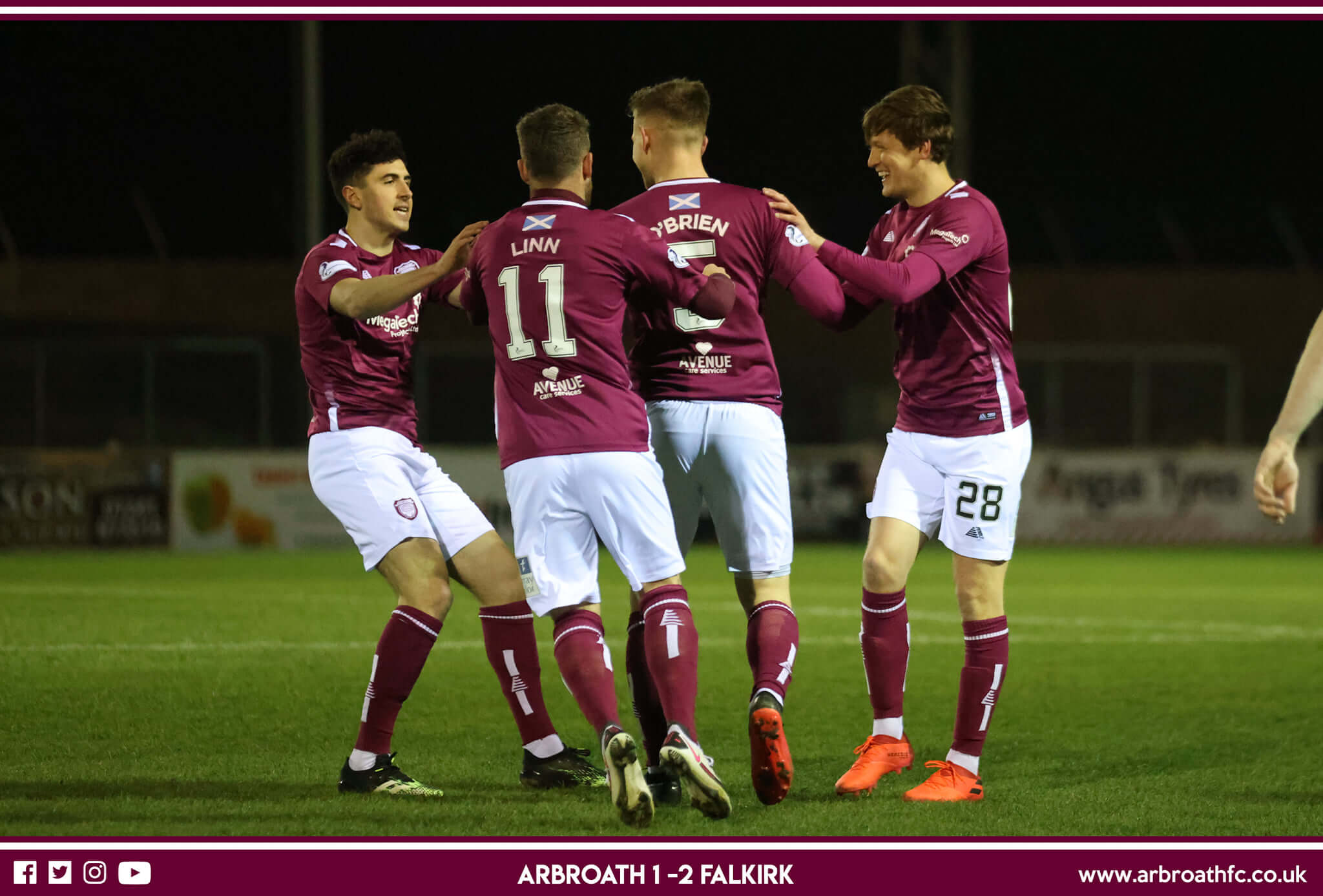 The Lichties crashed out of the Scottish Cup this evening at Gayfield in an eventful evening.

Arbroath made three changes with Scott Stewart, Dale Hilson and Lewis Moore all coming into an attacking starting line up, whilst Falkirk made several changes fro their match against Montrose on Saturday.

Arbroath attacked the Harbour end in the first half with a strong wind at their back and were soon putting pressure on the Falkirk goal as they dominated possession.

The opening goal came in the 8th minute when a cross into the box from Thomas O’Brien was assisted by the wind and caught out keeper Robbie Mutch with the ball bundling into the box.

Jack Hamilton though he had added a second goal for Arbroath in the 17th minute but Thomas O’Brien was adjudged to have committed a foul in the build up.

Arbroath’s bright start soon took a major blow as Bobby Linn was stretched off after it looked like he took a blow to the knee. Hopefully there will be more news in the coming days, but it goes without saying we are all hoping that Bobby is okay.

Ben Williamson replaced Bobby in the 31st minute and was booked just 5 minutes later for a foul on Anton Dowds.

Thomas O’Brien almost grabbed his second from a corner kick but his header narrowly missed the far corner.

Arbroath had dominated possession and play but Falkirk hit Arbroath on a quick counter attack in the 42nd minute and Charlie Telfer found the inside of the post after being set up by Akeel Francis.

As the second half kicked off it looked like Falkirk would have the advantage but as the wind calmed down it was still Arbroath who were asking all the questions and dominating play.

Jack Hamilton came close as he hit the post in the 68th minute then was denied a penalty minutes later which looked a stone waller.

Falkirk did start to gain some more momentum and started to hit Arbroath on the counter with pace. Connor Sammon had their first shot on goal in the second half in the 75th minute.

Dale Hilson headed over in the 78th minute as Arbroath just couldn’t catch a break in front of goal.

With just 3 minutes before extra time loomed, Sammon was tackled but the ball fell to substitute Kai Fotheringham who fired the ball into the corner of the net.

There wasn’t enough time for Arbroath to produce another real threat and for the second season in a row Falkirk knock us out of the Scottish Cup and go on to have another live match on TV.

For Arbroath, we now just have 6 cup finals left in the Championship.