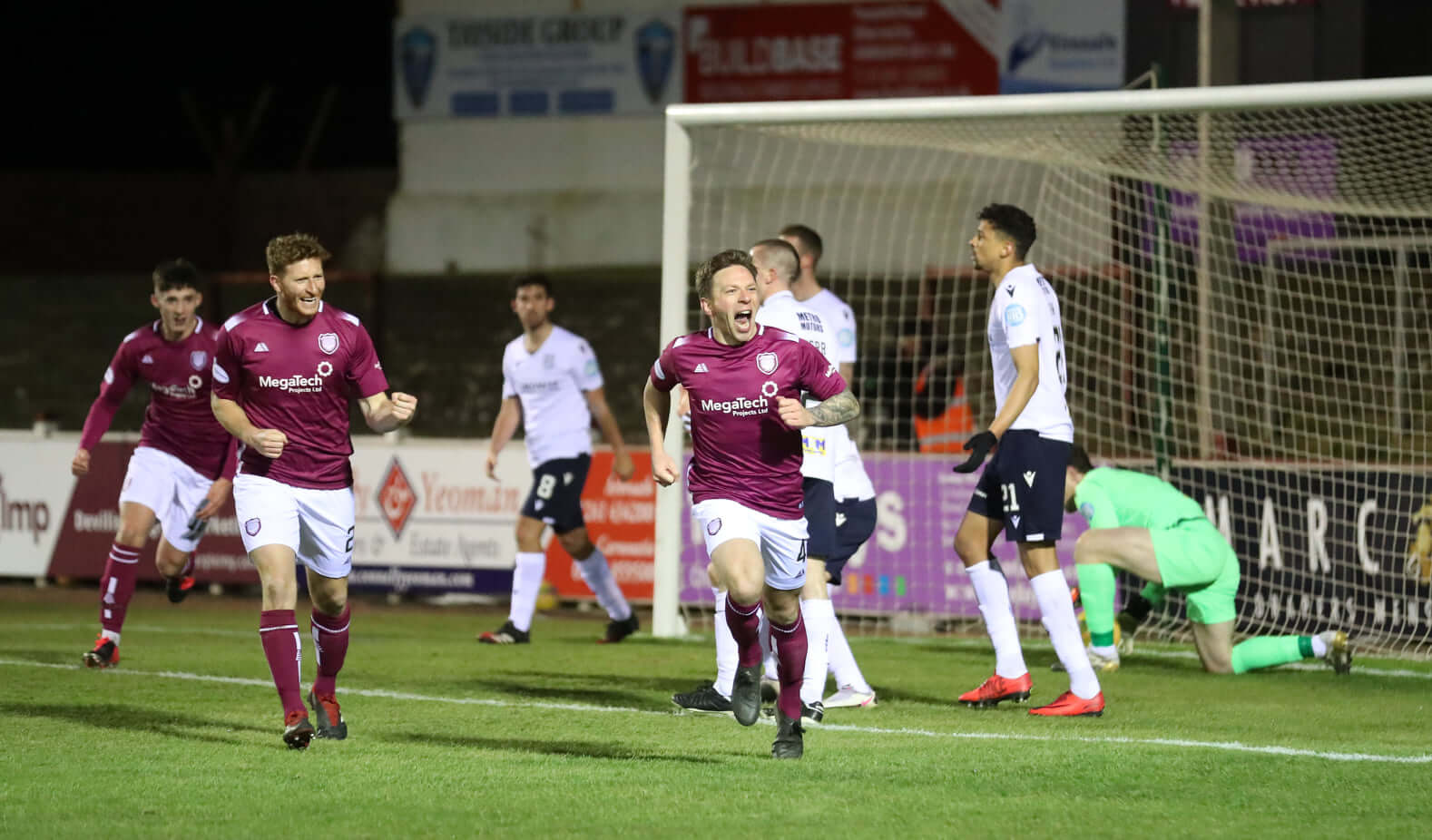 Arbroath welcomed Dundee to Gayfield Park on Friday night in the live BBC Scotland match under the lights.

Arbroath were able to welcome back Ricky Little and gave starts to Scott Stewart and Michael Ruth, with Mark Whatley and Jake Davidson dropping to the bench with Kris Doolan missing from the squad.

It was the first home game of 2021 for Arbroath and despite the absence of the traditional Gayfield wind, it was bitterly cold with the referee inspecting certain parts of the pitch before kick off as the temperatures dropped.

It was Dundee who took the centre as they attacked the Pleasureland end and made a bright start. There was little in terms of chances in the opening minutes with Arbroath trying to break down the left through James Craigen.

Arbroath conceded their 5th penalty of the season, and the 4th to a handball as Referee Greg Aitken pointed to the spot after Thomas O’Brien hand struck the ball after Osman Sow latched on to a Jordan McGhee cross.

Charlie Adam took charge of the ball and the Dundee Captain fired high and to the left into the back of the net to give Dundee the lead after just 8 minutes. Arbroath keeper Derek Gaston did get his gloves to the ball but the sheer force of Adam’s penalty was unstoppable. 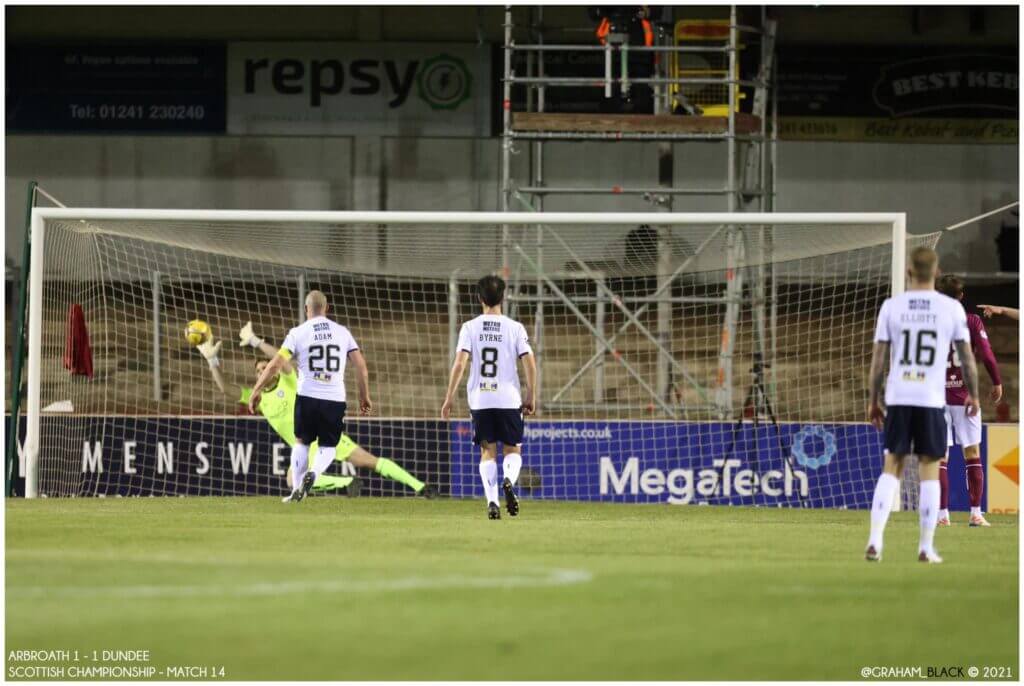 McGhee was forced off with a shoulder injury in the 15th minute unable to carry on from an earlier fall and was replaced by Cammy Kerr.

In the 25th minute a bursting run down the right wing by Michael Ruth set up Arbroath’s first real chance. Ruth found Dale Hilson and his cross was met by Scott Stewart in the middle of the box, but Stewart under pressure from Adam was unable to fully connect and the chance was missed.

Dundee really should have doubled their lead in the 30th minute when Paul McGown and Adam combined to lay up Danny Mullen but his left footed shot struck the bar from just 12 yards out.

Young Rangers loanee Ben Williamson was catching the eye on his home debut and he won a foul in the 37th minute after being taken out by Lee Ashcroft. The 19-year-old showed great confidence to take the ball and his well struck free kick was just over the bar. 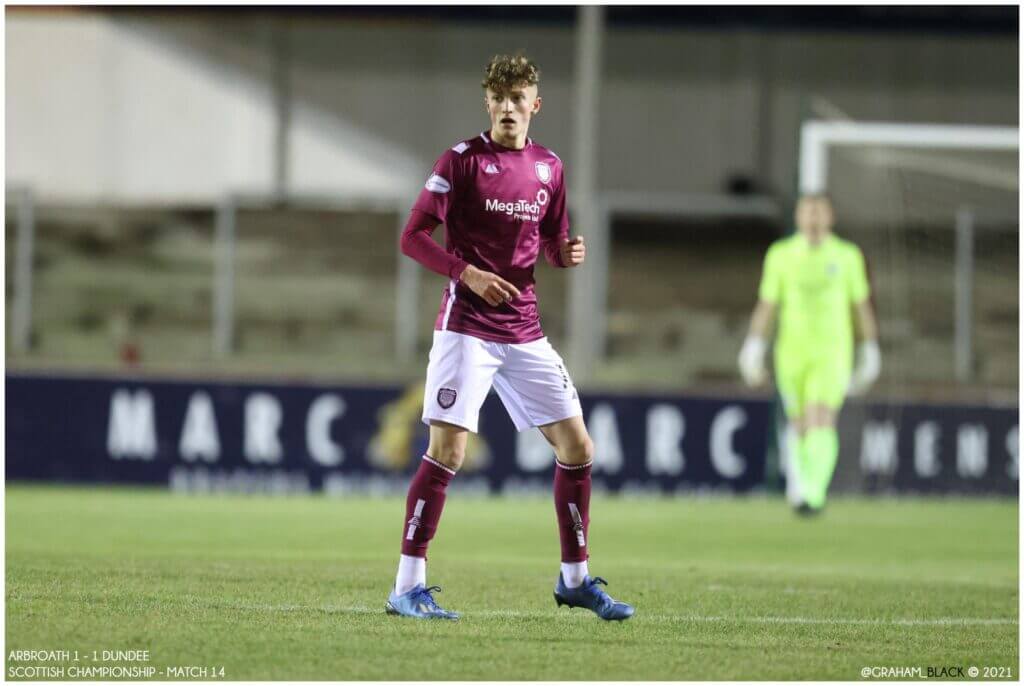 Dundee’s Christie Elliot was the first name in the Referee’s book after taking out Stewart as he threatened to break free on the half way line in the 39th minute.

Another injury forced Dundee to make another substitution just 5 minutes from the interval as Jonathan Afolabi came on for the injured Mullen.

Michael Ruth was next player to be booked as he caught Adam in the 40th minute. Two minutes later and Jason Thomson headed wide from an Arbroath free kick.

Charlie Adam’s name was also added to the Referee’s notebook on the stroke of half time for dissent.

With the first half in added injury time Arbroath keeper Derek Gaston kept his side in the game with a stunning reflex save as he blocked an Osman Sow shot with his right foot.

Dundee’s evening took another blow with experienced defender Liam Fontaine was forced off with an injury just 10 minutes into the second half with Jordon Foster coming on as a direct replacement.

James Craigen pooped up with a shot for Arbroath in the 58th minute but really had more time and should have done better but his shot was high and wide. It was to be his last involvement as Bobby Linn replaced him on the hour mark.

Linn wasted little time to make an impact as his corner kick in the 65th minute was met by unmarked defender Ricky Little who gave Jack Hamilton no chance with a bullet header from 6 yards. 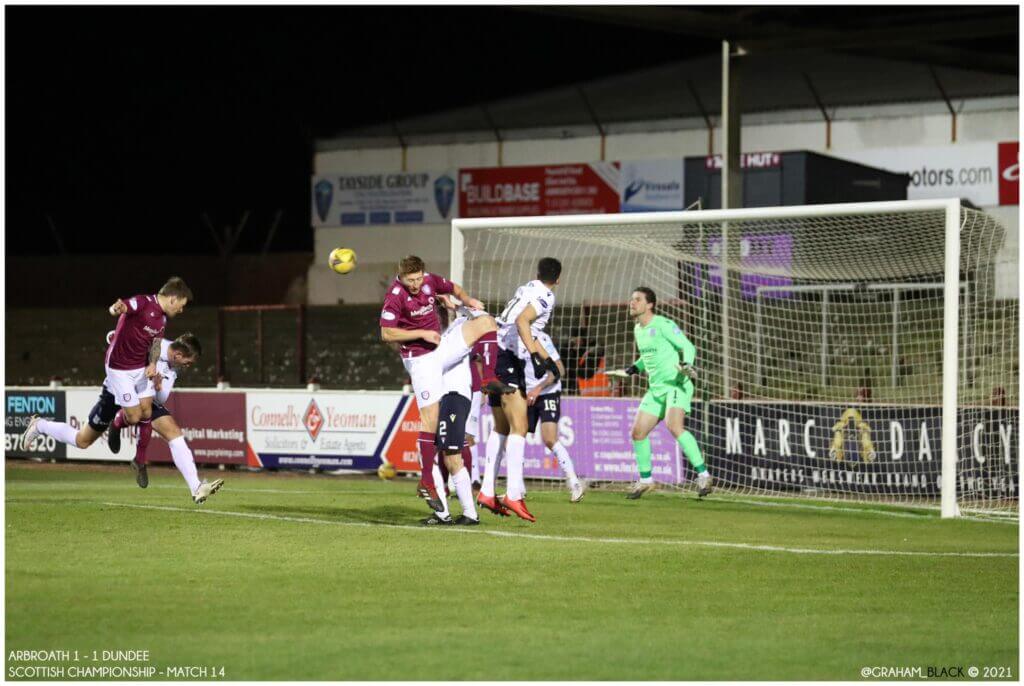 Michael McKenna came on for Scott Stewart just 60 seconds later, then Luke Donnelly came on for David Gold in the 70th minute as Dick Campbell went looking for the win.

Arbroath had taken a huge boost from the goal and were really taking the game to Dundee, so it was against the run of play when Charlie Adam showed his skill and creativity with a fierce shot in the 73rd minute which Derek Gaston did well to put away for a corner kick.

Bobby Linn normally would have burst the net but his strike in the 74th minute was high and wide.

However Arbroath kept coming and substitute Luke Donnelly and Dale Hilson enjoying the best move of the match, but the angle was tight and Hilson’s shot was straight at Hamilton where if he looked up he could have found a team mate.

Bobby Linn and Michael Ruth had a shot wide and blocked as Arbroath went looking for the winner, and Linn had another chance in the 83rd minute as Michael McKenna played him in but he couldn’t get his boot under the ball properly and Hamilton made the save.

Dundee caught a second wind and in the dying moments of the game Arbroath found themselves under pressure with Dundee winning two corners in quick succession.

As the game ran deep into injury time there was one last moment of brilliance from Arbroath Captain Thomas O’Brien. A delightful ball from Charlie Adam had beat Gaston and with Osman Sow waiting to head the ball into the empty net O’Brien threw himself at the ball clearing the danger and earning his team a deserved point.

Another showing of resilience and fight from Arbroath who came back for the second week in a row to earn a point. With very little between the teams, Arbroath just need a proven goalscorer to convert these draws into victories.

The Lichties travel to Greenock on Saturday to face Morton in their rescheduled Championship match.