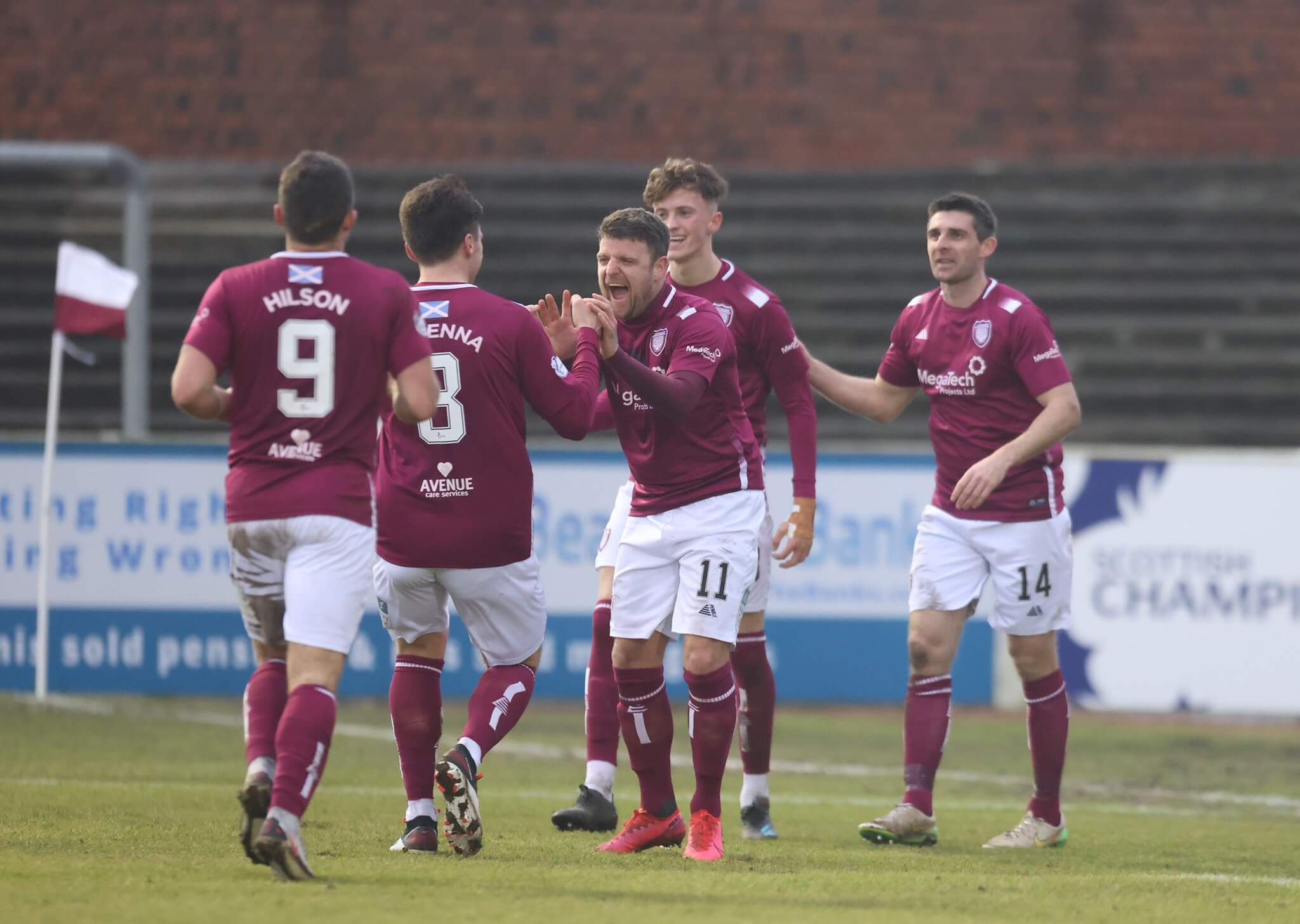 Highlights from behind the goals

Arbroath climbed up to 6th in the Championship after a well deserved win over 2nd placed Raith Rovers at Gayfield on Saturday.

The depleted Lichties looked up against it even before a ball had been kicked, as in-form hitman Jack Hamilton was only fit enough for a space on the bench after suffering a knock whilst fellow striker Luke Donnelly joined Gavin Swankie and Jake Davidson on the injured list.

Not surprisingly a strong wind had picked up before kick off and Raith Rovers who won the toss decided to use it to their advantage as they attacked the Pleasure Land end.

Yet the first chance fell to Arbroath after just 45 seconds. A corner kick from Bobby Linn was played into the path of Thomas O’Brien by Ricky Little but his shot was blocked before the Arbroath Captain took the ball to the face in the resulting clearance.

As the game started to play out it was surprisingly Arbroath who were in total control as they had quickly adapted to playing into the wind.

Rover’s Dylan Tait did well to block a Kris Doolan shot at the back post which looked net bound after a great ball was curled into his feet by Jason Thomson.

With just 4 minutes left in the first half Scott Stewart played a delightful weighted ball into the path of Ben Williamson who skipped past the experienced pairing of Benedictus and Davidson only to have his shot saved by Jamie MacDonald who had read the danger and rushed out to prevent the on-loan Rangers youngster netting his first Arbroath goal.

As the second half kicked off, Arbroath knew they had the wind at their backs and with experience in these conditions didn’t waste anytime in shooting towards goal with Stewart fizzing a 25 yard drive just wide of MacDonald’s post.

Bobby Linn who had again been the stand out for Arbroath struck a shot at MacDonald in the 57th minute after a clever through ball from Dale Hilson.

On the hour mark Arbroath finally got the all important goal. Michael McKenna intercepted a poor pass from Kieran MacDonald and after a quick look up curled the ball into the box where Kris Doolan showed great composure to lift the ball over the outrushing MacDonald to score his 3rd goal of the season.

Bobby Linn wasn’t letting up and a dazzling run down the wing, past two defenders deserved a goal in the 66th minute but his shot was smothered by MacDonald.

The Raith Rovers attacking players which had been responsible for so many goals this season had been quiet but almost caught Arbroath out in the 68th minute when Gozie Ugwu struck the post from a tight angle after a Regan Hendry cross.

Despite not really being in the game at all, Raith Rovers should have equalised in the 80th minute as Hendry was given far too much space to run at the Arbroath goal from the half way line.

Just before entering the 18 yard box Hendry found Daniel Armstrong to his right and the winger crossed the ball along the 6 yard line where substitute Immanuelson Duku was ready to pounce, but the striker swung at fresh air completing missing the ball and the ball trundled out for a throw in.

Arbroath supporters had been waiting to see Hearts loanee Lewis Moore for a few weeks but he made a lasting impression as he enter the field of play for Doolan in the 78th minute.

In the 85th minute he left the Rovers defenders in his wake as he ran at goal before passing to Dale Hilson whose shot was parried by MacDonald only back to the feet of Hilson whose second shot was cleared off the line by Kyle Benedictus.

Three minutes later again Moore left 3 players standing with his trickery playing a slide pass through to Hilson who again was foiled by MacDonald who made a great save with his legs before the rebound was put wide by Stewart.

The final whistle brought joy to the Arbroath players who remain undefeated in 7 matches in 2021 and are playing with the form and confidence which was associated with their debut season in the Championship.

With only 10 games remaining, Dick Campbell will tell you that safety is his only ambition, but in this form, Arbroath fans can perhaps start to look up the table.