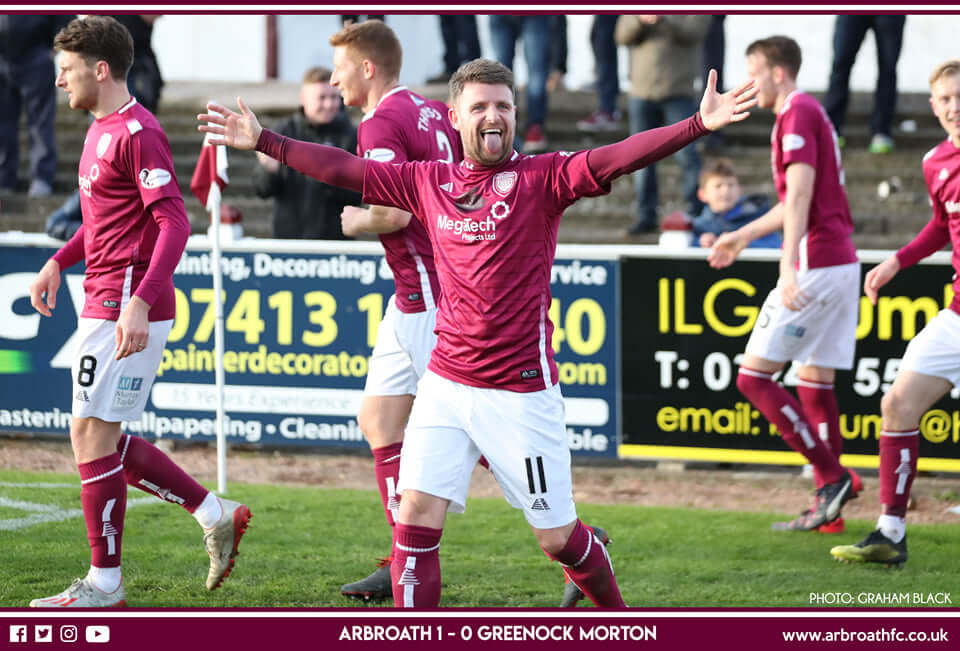 Arbroath got back to winning ways today thanks to another sublime free kick from Bobby Linn in the 74th minute.

Scott Stewart made his first appearance for Arbroath since August as he came into the starting line up alongside Bobby Linn, Miko Virtanen, David Gold, Jason Thomson, and Luke Donnelly with Ben Stirling, Michael McKenna, Steven Doris, Greig Spence, Omar Kader all dropping to the bench with James Murphy also missing out.

Arbroath started brightly and the pace of Scott Stewart was creating all sorts of problems for Morton with the Arbroath fans delighted to see the winger back to full fitness.

There was a moment of confusion and controversy in the 23rd minute as a good passing movement by Arbroath ended up with Stewart smashing the ball into the back of the net from 18 yards, but referee William Collum pulled play back and gave a drop ball just outside of the 18 yard box.

The ball had taken a touch off the referee and with the new rules implemented this season it meant that play had to stop.

Morton should have scored at the other but Peter Grant smashed the ball over the bar from 4 yards out in the 27th minute.

As the second half got underway there was a huge chance for Morton striker Nicky Cadden who seemed to be clear through on the Arbroath goal but the striker went down just before racing to the ball with a hamstring injury and had to be replaced by Billy King.

Michael McKenna and Josh Campbell came on for Scott Stewart and David Gold in the 63rd minute but it was Bobby Linn who was Arbroath’s hero yet again.

A foul by on Thomas O’Brien by Cameron Blues gave Bobby Linn the perfect chance to line up the ball and he made no mistake as he curled the ball into the top right hand corner giving Sam Ramsbottom no chance.

There was more controversy in the 79th minute when a ball clearly hit the arm of Lewis Strapp but yet the a penalty wasn’t given much to the frustration of the vast majority of the ground.

Steven Doris came on for Luke Donnelly in the 86th minute.

There was a huge scare for Arbroath in the 90th minute as Morton had the ball in the net but the cheers of the visiting fans were short lived as the stand side linesman had his flag up for offside.

Right at the death and Arbroath should have killed the game. A fantastic surging run up the pitch by Michael McKenna allowed him to cross into the middle but Josh Campbell’s acrobatic finish just went over the bar.

Arbroath’s 3rd win in 9 games and the end of the 1st quarter with 11 points on the board. As results proved today anyone can beat anyone in this Championship, but yet again the boys have proved they have what it takes to compete!

Thank you for your support!