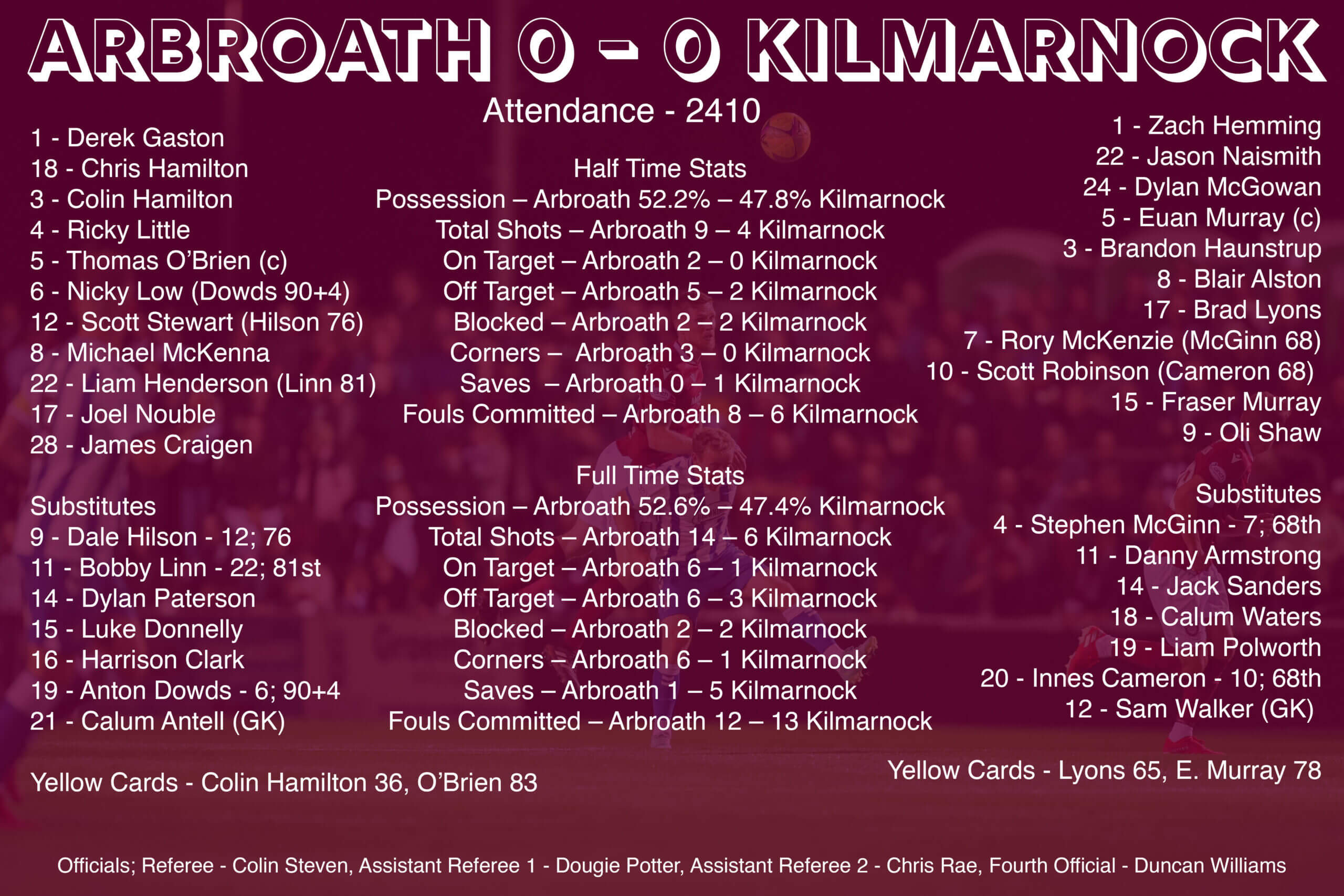 Kilmarnock held Arbroath to a goalless draw on Friday night, a game which was broadcast live on BBC Scotland in which the Lichties and striker Joel Nouble will have gained some new fans across the country.

Just under 2500 fans from both sides created a great pre-match atmosphere and as the players were cheered out onto the pitch. There was a great expectation inside Gayfield as a draw for the visitors or a win for the Lichties would see them be top of the cinch Scottish Championship at least for 24 hours.

With David Gold serving a one match suspension, Chris Hamilton came into the team as a straight replacement at right back in the only change to the squad from the win at Queen of the South.

As in recent matches it was a 4-4-2 formation with Chris Hamilton, Ricky Little, Captain Thomas O’Brien and Colin Hamilton in front of Derek Gaston from Right to Left, then Scott Stewart, Nicky Low, Liam Henderson and James Craigen with Michael McKenna and Joel Nouble spearheading the attack.

Gayfield was warm but with a slight breeze blowing in from the sea but he pitch was looking fantastic under the floodlights as Kilmarnock kicked off attacking the Switchie end.

Kilmarnock had a great chance inside the 2nd minute when a cross from Scott Robinson was cleared by Ricky Little but Brandon Haunstrup raced forward and hit a left footed shot which thankfully for Arbroath was wide of the post.

Arbroath started to come into the game and Joel Nouble gave the visiting fans a glimpse of what he is capable of when he won a free kick out on the wing deep into the Kilmarnock half.

Ricky Little came a few inches of scoring a spectacular goal from deep inside his own half. Arbroath won a free kick and with Kilmarnock goalkeeper Zach Hemming off his line, Little smashed the free kick high towards his goal with it just drifting narrowly wide in the 5th minute.

Nicky Low was once again being an inspiration for all Arbroath’s creativity whilst also tracking back and digging in to help his defence.

A run up the right wing by McKenna seen the ball knocked out of play after coming off a defender but a quick throw by McKenna found Nouble who got in between two defenders then used his power to get round the final man before hitting a very tight angled drive across goal which went through the legs of Hemming but cruel bounce off the inside of the post and then back out into play.

Nouble was again involved a minute later when he latched on to a forward header from Colin Hamilton and as the defenders took a step back, the space opened up for him but he dragged his shot wide.

Arbroath were to hit the post again, this time it was a corner from the right by Nicky Low which was punched away by Hemming. McKenna regained possession and Colin Hamilton and Nouble combined before Nouble showed great skill to turn his man on the byline before coming inside and have a shot which came off Hemming’s foot bouncing up and hitting Colin Hamilton before hitting the post for a goal kick.

Michael McKenna forced Hemming into a save in the 18th minute as he raced onto a flicked ball before firing a shot from a narrow angle which was on target.

The Arbroath defence were again standing up to the test, with Chris Hamilton having a really impressive match at right back. A show was blocked as Rory McKenzie tried his luck in the 21st minute.

It was Arbroath who came knocking again as Nouble again was creating the Killie defence all sorts of problems as he raced up the right wing muscling his was past Euan Murray before his cross was headed down by McKenna into the path of James Craigen who struck the ball first time at goal only to be denied by Euan Murray who cleared the ball off the line. Nicky Low hit the follow up but his shot came off Scott Stewart for a goal kick.

A corner kick from James Craigen on the half hour mark was met by Colin Hamilton at the back post but it was just too tight of an angle and the ball sailed over the bar.

Colin Hamilton was booked in the 36th minute for a foul on Rory McKenzie just 6 from the Arbroath byline to the right of the 18 year box. McKenzie took the free kick and Oli Shaw won the header but his effort was wide of the post.

Arbroath’s recent style of attacking play was highlighted with a lovely move in the 43rd minute. A cross by Naismith was headed clear by Thomas O’Brien and immediately picked up by Colin Hamilton who found Low in space and he in turn found McKenna who ran into space before running forward then he found Nouble who had a quick shuffle of the feet before curling a shot which was blocked by Euan Murray.

As Arbroath fans will know the wind really wasn’t that strong on Friday night, but Kilmarnock did come out knowing they would have the wind at their back, but it does take getting used to and Arbroath as they have shown over the years can actually sometimes play better football playing into the wind.

Arbroath wasted no time in continuing to press Kilmarnock and Stewart again was giving his all pressing high and chasing any loose ball on the right wing.

A surging run forward by McKenna allowed Arbroath to get the ball high up the pitch which was then put out for a corner kick which was swung in by Nicky Low which was met by Thomas O’Brien who was injured in the process but after a quick check by physiotherapist Craig Reynolds, O’Brien was able to continue.

Zach Hemming’s goal kicks were landing in the gloves of Derek Gaston as Killie struggled to adjust to the strength of the wind.

McKenna and Craigen combined down the left in the 63rd minute which allowed Henderson to line up a shot only for Referee Colin Steven to get in his place, but Arbroath regained possession and McKenna found Craigen who cut inside and fired at goal winning a corner kick.

Brad Lyons picked up a yellow card, the second of the evening in the 65th minute for a high challenge on Low.

From the free kick the ball found it’s way to the right wing where Stewart put in a deep cross. It was picked up by O’Brien who cut outside his man before firing a show at goal which Hemmings did well to block with his feet.

Kilmarnock were first to make a change as Stephen McGinn and Innes Cameron came on for Scott Robinson and Rory McKenzie.

There was a claim for a penalty in the Kilmarnock box from Nouble in the 73rd minute as he picked up the ball and burst past 3 defenders before being pushed off the ball by Euan Murray.

Oli Shaw turned in the Arbroath box and fired a low drive at goal which Derek Gaston did brilliantly to save. He dived to his right with his right hand coming down to block the ball on the line. It was the first real save that Gaston had been called into making and he didn’t let his side down with a really strong save.

Scott Stewart was replaced by Dale Hilson in the 76th minute for Arbroath’s first change of the match.

Euan Murray was booked for a challenge on Michael McKenna as Arbroath broke up the field on another counter attack in the 78th minute.

Bobby Linn was given a huge roar by the Arbroath support as he replaced Liam Henderson who had another outstanding match in midfield.

Both Linn and Hilson pushed forward as Arbroath went all out to try and grab the winner.

Thomas O’Brien was shown a yellow card in the 83rd minute for a foul on Shaw.

There was one final half chance for Arbroath as they turned over possession before Mckenna ran in on the angle but his shot was straight into the hands of Hemmings.

Arbroath’s night did have one sour note as Nicky Low was forced off in the 92nd minute as he went to clear the ball from Innes Cameron, the striker fell on his ankle twisting it back. Nicky had to leave the field of play and was replaced by Anton Dowds.

The game came to an end in the 98th minute.

It was another battling, attacking, spirited team performance by the Lichties who pushed Kilmarnock all the way. From hitting the post twice and having a shot cleared off the line it was Arbroath who certainly had the best chances with Derek Gaston’s shot from Oli Shaw Kilmarnock’s only really attempt on goal.

Arbroath are undefeated in 6 Championship matches and now set their thoughts onto Saturday’s away trip to Greenock Morton.