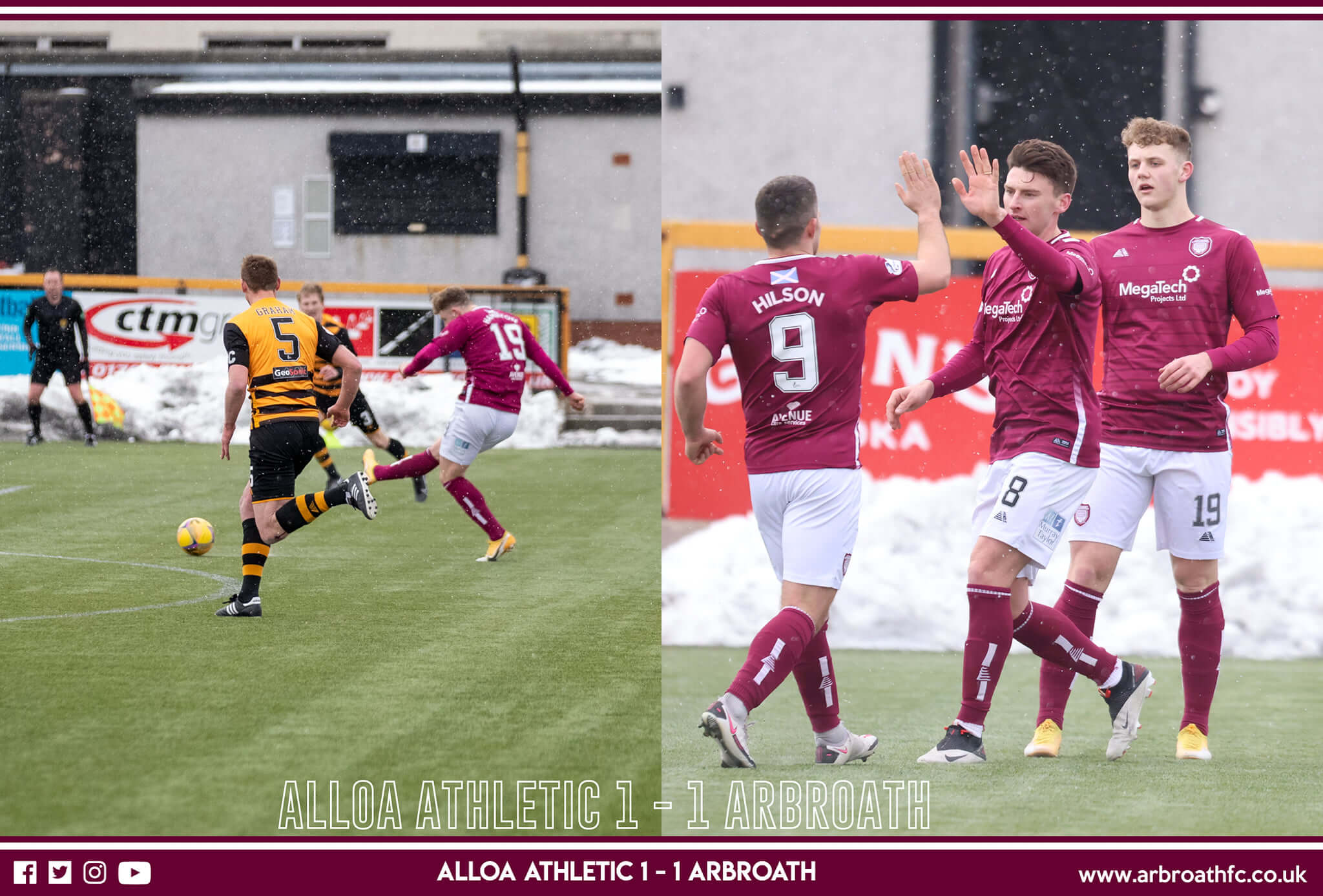 Arbroath left the Indodrill Stadium with another point this afternoon as they stretched their undefeated run to 6 matches, yet the Lichties really should have taken all 3 points.

On a very cold afternoon in Alloa, the Lichties made only one change from last Saturday with Colin Hamilton replacing Scott Stewart in defence.

Arbroath were attacking towards the road in the first half, as they were shooting up the hill. Right from kick off Arbroath looked sharp and in control of the game as Jack Hamilton did well to control a Jason Thomson through ball then shooting forcing Neil Parry into an early save just after 3 minutes.

The Lichties were confident in their play and kept attacking with Bobby Linn linking up with Colin Hamilton down the left whilst Ben Williamson again impressed in midfield.

Alloa’s first attack on goal was in the 17th minute when Kevin Cawley turned in the box but shot directly at Derek Gaston.

Jack Hamilton made it 3 goals in 4 games for Arbroath as he calmly slotted from 25 yards after Dale Hilson chased down the ball forcing Neil Parry into making a mistake and as the ball fell into space Jack Hamilton showed great composure to guide the ball into the empty net.

It really just seemed a matter of when Arbroath would add a second as they didn’t let up and continued to attack with Bobby Linn having a shot blocked on the half hour mark.

Alloa’s Ray Grant was booked for a foul on Hilson in the 34th minute before team mate Lucas Williamson found his way into the referee’s notebook just 2 minutes later for a foul on Michael McKenna.

Jon Robertson struck a wild shot wide and over the bar and really should have done better as the ball fell to him in the Arbroath box in the 41st minute.

Just before the half time whistle a bursting run forward by Bobby Linn found Jack Hamilton who laid the ball into the path of Michael McKenna who struck the ball first time forcing Neil Parry into a diving save.

As the snow started to come down quite heavily the second half got underway under freezing conditions.

Alloa seemed to be getting more of the ball as the second half started to unfold with Arbroath just not quite getting the slick passing that they did so beautifully in the first half.

Despite a foul on Thomas O’Brien who was laid flat out on the 6 yard line with a head knock in the 54th minute Alloa were allowed to play on and Arbroath were given a huge let off as Ray Grant hit the cross bar from 19 yards.

In the 63rd minute Bobby Linn was replaced by Scott Stewart with Micheal McKenna switching out to the left wing with Stewart playing down the right.

A minute later and Alloa Athletic were down to 10 men. Ray Grant was shown a second yellow card for a foul on James Craigen who had danced past three challenges before being cut down just outside the 18 yard box leaving Arbroath 26 minutes left to play with an extra man.

From the resulting free kick Ben Williamson just curled the ball on the wrong side of the post.

Steven Hetherington was the next player to be booked in the 67th minute before Stefan Scougall replaced Lucas Williamson for Alloa.

Despite being down to 10 men Alloa were looking much more of a threat in the attacking sense than they had with 11 players and Kevin Cawley forced Thomas O’Brien into making a block in the 70th minute after a well worked corner kick routine.

Thomas O’Brien was booked in the 73rd minute as he caught Innes Cameron who threatened to break before Scott Stewart again came close just 4 minutes later.

A dazzling run from Scott Stewart from the half way line in the 75th almost got Arbroath’s second goal but his left footed strike was brilliantly saved by Parry to put it over the bar.

James Craigen conceded a free kick in a dangerous position just outside of the Arbroath box in the 78th minute and he too was booked for his foul.

Kevin Cawley’s free-kick was wide of the far post as Arbroath introduced David Gold for Ben Williamson as play resumed.

With 5 minutes left on the clock, Kris Doolan came on for Dale Hilson but seconds later and Arbroath were also reduced to 10 men as Craigen picked up his second booking for a foul on Kevin Cawley in the Alloa half.

Robert Thomson came on for Alloa Athletic in the 87th minute with the tall striker replacing Jon Robertson.

With the game now past the 90 minute mark disaster and Innes Cameron out jumped the Arbroath defence to head the ball across goal and into the far corner to level the match.

Jack Hamilton did brilliantly to run into the Alloa box looking for the winner but he was soon crowded out and with the last kick of the ball substitute David Gold shot high over the bar.

A tough result, but Arbroath move up to 7th in the league, just 5 points behind Dundee in 4th, and only 3 points above Alloa Athletic in 10th.

It really is a very close Championship and despite the result Arbroath have continued their impressive unbeaten run and Jack Hamilton continues to inspire up front. The Team have performed fantastically over the past 6 matches moving up the table.