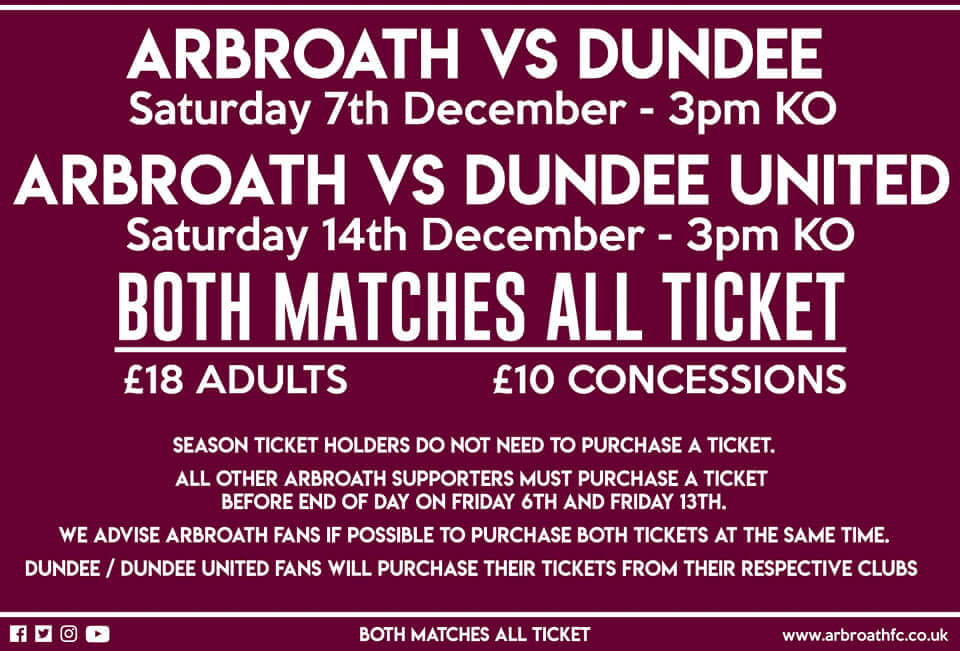 Arbroath vs Dundee / Dundee United Ticket Information
The two upcoming games against Dundee (Saturday 7th December) and Dundee United (Saturday 14th December) are to be all ticket.
We have taken this matter as we will have segregation in place and both games are expected to draw very large crowds and we wish all supporters to enjoy these matches in a safe environment.
Tickets are on sale from Tuesday 26th November at 10am from Gayfield.
All season ticket holders do not need a ticket to enter these matches, they will just show their season tickets as per normal at the turnstiles.
However all other Arbroath supporters planning on attending these games MUST buy a ticket before the end of day Friday 6th December (Dundee) and Friday 13th December (Dundee United.)
Admission Prices
These are the same prices as every other Championship game at Gayfield, however we can only offer two types of ticket.
£18 – Adults
£10 – Concessions
These tickets will be on sale from the office at Gayfield Park.
The Gayfield Office is open during the week and we accept cash or card;
Monday – 10am to 2pm
Tuesday – 10am to 2pm
Wednesday – Closed
Thursday – 10am to 2pm
Friday – 10am to 2pm
Tickets will also be on sale on Wednesday 27th November in the Champions Lounge from 6.45pm until before kick off in our Scottish Cup William Hill 3rd Round Replay against Auchinleck Talbot.
Other evening opportunities will be announced before either game.
We urge supporters when possible to buy tickets for both games at the same time.
Unfortunately we shall only have 3 spaces under the main stand for wheelchair users and their carers.
All seating in the Arbroath section of the main stand will be first come, first served unless you have recently taken up our offer of “buy a seat.”
We also wish to remind fans of our Festive Season Ticket which is on sale now and is valid for all remaining Home games (11) including 2 games against Dundee and 2 games against Dundee United;
£20 – Junior Season Ticket – Under 12
£40 – Juvenile Season Ticket – 13 to 18 years old, (Also adults in full time education with valid matriculation card)
£65 – Senior Citizens (65 and over)
£135 – Adults
Dundee and Dundee United Supporters must buy their tickets from their own clubs which will be announcing their details soon.
As always you can get in touch via email; arbroathfc@outlook.com or call 01241 872157 (Tickets can’t be ordered via Facebook or Twitter)
Thank you and C’mon the Lichties