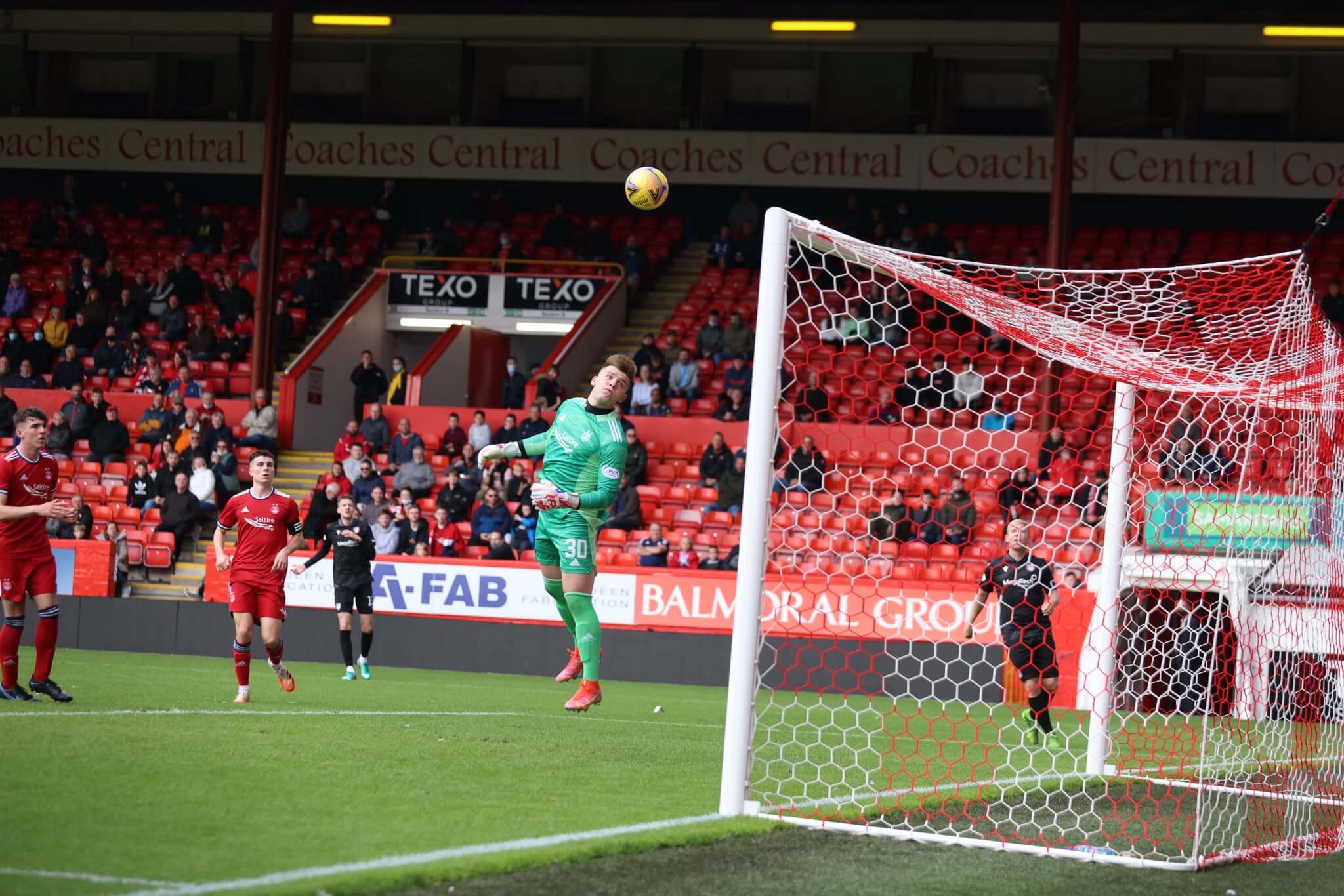 Arbroath exited the SPFL Trust Trophy second round this afternoon at Pittodrie as the young Aberdeen B team won 4-1 on penalties.

It did look Arbroath were heading out for an early exit after former loan Lichtie Michael Ruth netted for the Pittodrie Team in the 74th minute but a goal deep in injury time from Liam Henderson forced the game into the penalty shoot out.

Arbroath travelled up to Pittodrie without Bobby Linn, Ricky Little and Joel Nouble with Manager Dick Campbell making 8 changes from the side that defeated Aberdeen Blast weekend.

Arbroath lined up with a 4-4-2 with Antell in goal, Chris Hamilton at left back, David Gold at Right back with Jason Thomson and Liam Henderson playing in central defence.

Dylan Paterson was playing on the right wing, then Harrison Clark, Nicky Low and Dale Hilson on the left wing with Anton Dowds and Luke Donnelly playing up front.

Former Aberdeen player Nicky Low had the honour of wearing the Captain’s armband this afternoon for the first time.

Arbroath attacked the Richard Donald Stand in the first half and soon had an early stranglehold on possession putting the Aberdeen defence under pressure with Dale Hilson having a shot blocked but Nicky Low missed to the right.

The long Dons were quick on the break and Jack MacIver had a shot from the edge of the box over the bar in the 14th minute.

Anton Dowds met a cross at the back post and his header was just wide in the 18th minute.

Dylan Paterson who was looking lively and a creative outlet for the Lichties hit a shot over in the 23rd minute before Luke Donnelly had a shot saved just seconds later.

Arbroath were racking up the corners but weren’t really capitalising on the set pierce opportunities.

David Gold came very close with a header a cross from the Arbroath right but his header was just wide in the 40th minute before Nicky Low fired over 2 minutes later.

There was a break in play after Defender Evan Towler needed medical treatment after taking a heavy blow as he fell to the ground. Thankfully he was okay and able to continue playing.

The best chance of the first half came from a determined run by Dylan Paterson but his shot, which had beat Ritchie in goal bounced off the cross bar in the 3rd minute of injury time in the first half.

There were no changes at the break for either team as Arbroath attacked the Merkland end next to a large traveling Arbroath support.

The young Dons started to push up the pitch in the second half and were hitting Arbroath on counter attacks.

The Lichties again were pressing for a goal and Anton Dowds had a shot saved by Tom Ritchie in the 54th minute before firing a header just over seconds later.

Kieran Ngwenya did well in the 58th minute and raced down the pitch coming close as his left footed shot crossed the Arbroath goal just missing the far post.

Kieran Ngwenya drew a foul by Liam Henderson in the 59th minute as he cut outside then inside giving the home side a free kick in a dangerous area outside of the box which Calum Antell did brilliantly well to tip over for a corner kick.

Tom Ritchie pulled off another stunning save in the 62nd minute as he pushed Nicky Low’s shot on to the bar.

Jack MacIver was next in the referee’s notebook after a foul on Dale Hilson in the 62nd minute with Arbroath making their first change of the afternoon shortly after as Colin Hamilton replaced David Gold.

Luke Donnelly hit a header over the bar following a corner in the 64th minute before he was replaced by Michael McKenna.

Dylan Paterson hit a shot over, with Nicky Low firing wide in the 68th and 69th minute before Thomas O’Brien, Scott Stewart and James Craigen came on for Nicky Low, Harrison Clark and Chris Hamilton in the 72nd minute.

It was Aberdeen who took the lead just 2 minutes later. A ball over the top Tyler Mykata found Ngwenya and his cross was met by former loan Lichtie Michael Ruth who wasn’t going to miss from close range.

It was a bitter blow for the Lichties, but it was a great move by the young Dons and they had the upper hand with just 16 minutes left on the clock.

Arbroath tried to push forward but the Aberdeen defenders had been stubborn and determined all afternoon and it was turning out not to be Arbroath’s afternoon as Jason Thomson hit the bar in the 82nd minute with O’Brien firing wide.

Anton Dowds had a shot blocked in the 88th minute before Michael McKenna was next in the book in the 90th minute.

With lots of stoppage time to be played it looked like Arbroath had finally got the break but despite Jason Thomson beating Ritchie his shot hit the post and just as Dale Hilson was about to pounce the ball was cleared by Evan Towler.

Calum Antell came up for the corner and with just seconds to spare, Ritchie was caught outside of his goal and Liam Henderson show great composure to sail the ball into the back of the net from 18 yards with Antell waiting to pounce.

The game then went straight to a penalty shoot out and the action moved to the Richard Donald end in front of the home support.

It was a lesson in not taking your chances again for the Lichties. 19 shots, but only 4 on target was the problem today and then the curse again of penalty kicks!

Dylan Paterson showed the Arbroath fans what he offers to the side and looked dangerous throughout for the Lichties.

The Aberdeen B team played really well, and there are some future Aberdeen first team players in that young side for certain and it will be an afternoon and result they will never forget.

Arbroath will return to Championship action next Saturday when Hamilton Accies visit Gayfield.